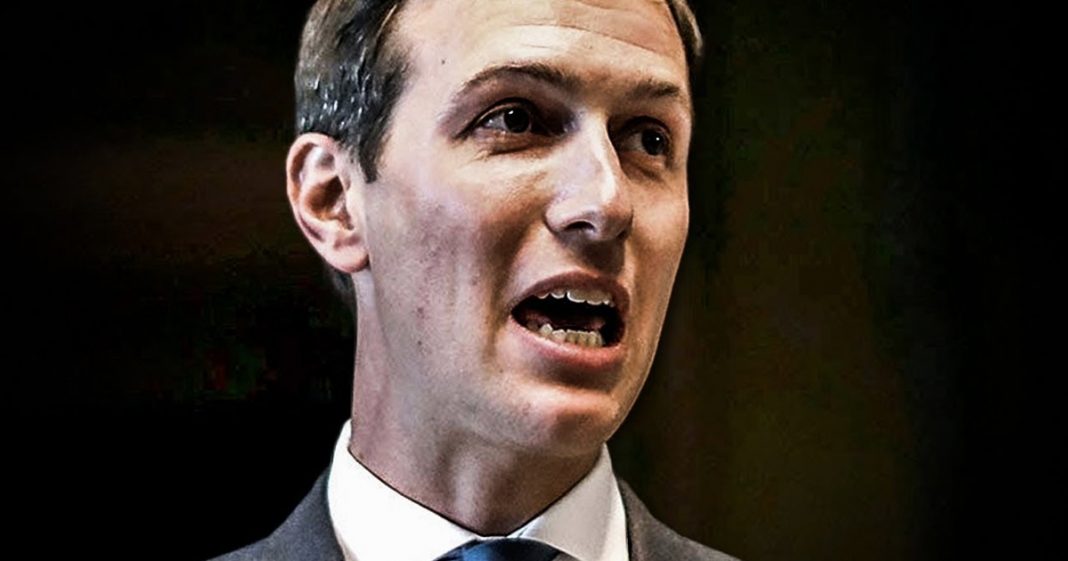 According to Rob Goldstone, the man who arranged the meeting between a Russian lawyer and Donald Trump, Jr., claimed in his Congressional testimony that Jared Kushner was absolutely furious over the fact that the Russians never delivered the goods on Hillary Clinton. Ironically, he also claims that he never knew what the meeting was supposed to be about. Kushner’s stories don’t add up, as Ring of Fire’s Farron Cousins explains.

Rob Goldstone, the British music promoter who actually set up the meeting between Donald Trump, Jr. and Russian lawyer/spy, Natalia Veselnitskaya, he said during his Congressional testimony that Jared Kushner, who was also present at that meeting was super pissed off because this Russian lawyer wasn’t handing over the dirt on Hillary Clinton. Now we know this because some of the transcripts from the Congressional testimonies were released this week and that is what Rob Goldstone told members of Congress about Jared Kushner. He was “infuriated and irate” that she wasn’t handing over this horrible information about the Clintons and the DNC because Jared Kushner walked into that meeting knowing and fully expecting to get all of the dirt available on the democrats.

Here’s why this is important, other than the obvious fact of collusion, Jared Kushner has said publicly and during his own testimony that he didn’t know what the meeting was even going to be about. And he said … this is what Kushner said about his role in that meeting … He was bored and confused through the whole thing. Now I know Jared Kushner is not a smart human being, he’s the kind of guy that just continues to fail upwards for some reason, much like George W. Bush, but to try to use your stupidity as an excuse as to you not knowing what that meeting was about … it seemed viable at the time because you’ve proven to be so incredibly stupid to the American public but now you just got busted by Rob Goldstone who says that you knew what that meeting was about and then you were infuriated when they didn’t deliver the information because they just wanted to talk about Russian sanctions. Gee, I wonder why they wanted to talk about Russian sanctions. Was it because they wanted you to know what they wanted from Donald Trump when he took office before they decided to hand you the information that you so desperately wanted? That’s my guess.

I think, at this point, anyone arguing that collusion didn’t at least slightly happen or that members of the Trump family didn’t try to make it happen … If you’re arguing that that’s not the case, then you haven’t been paying attention to what’s going on in this country for the last 12 months. The evidence, at this point, is overwhelming. Trump, Jr. did it himself when he sent those emails out to the world via Twitter and said, this is what it was and it’s him being super excited about meeting with a Russian lawyer who has now admitted that she was an informant for Putin’s government saying that he wants that dirt on Hillary Clinton so bad he can taste it. And then Kushner, who claims he was so stupid he didn’t know what was going on, knew what was happening and was pissed off when she didn’t deliver. I don’t think there’s really much more evidence needed to prove this at this point. Veselnitskaya has offered to testify before Congress, she’s admitted that she’s an informant for the Russian government and she admitted that Donald Trump, Jr. and everybody else in that meeting, Kushner and Manafort, met with her because they thought they were getting dirt on Hillary Clinton.

That about sums it up folks. So, if you want to still go out there and deny that any of this actually happened, perhaps it’s time that people looked into … I don’t know … why people are so desperate to think that collusion wasn’t possible. Now admittedly, the lawyer never turned over any of the dirt on Hillary Clinton as promised so people might say, well that proved there was no collusion … Well, collusion is also intent and if you go meet with somebody who is now an admitted foreign spy because you think they have information that’s going to help your father’s presidential campaign, then yeah, you may not have gotten the information but at the end of the day … that’s still collusion.