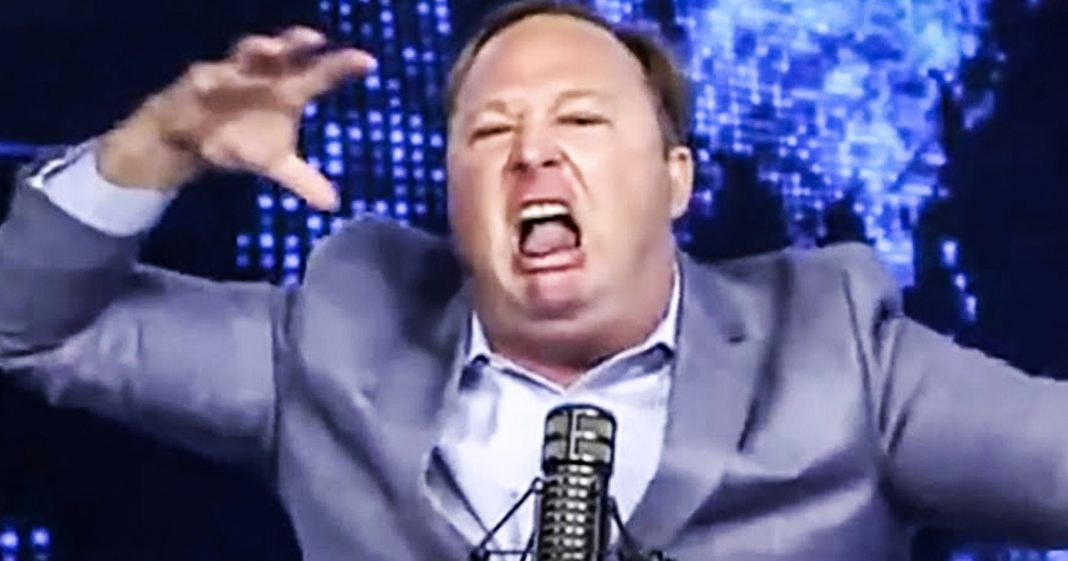 According to Alex Jones, the leakers in the Trump White House aren’t actually people, but there are actually artificial intelligence robots that are leaking the information to the press. These robots, according to Jones, can’t be detected by traditional tracking sources, making the President the target of nonstop sting operations. Ring of Fire’s Farron Cousins explains why Jones’ comments are so damaging to the conversation surrounding the leakers.

Ladies and gentlemen, Alex Jones has figured out why so many people within the Trump administration are leaking information to the press. Alex Jones has finally cracked the code and figured out what investigative journalists all around this country have continued to fail to discover, and that is why people in the White House keep leaking information about Donald Trump. And as it turns out, people aren’t the ones who are actually leaking the information. Take a look at how Alex Jones himself explains it.

Alex Jones:
And the fact that, I guarantee it, you’ve had bug sniffers in there, that went for old traditional bugs and wire taps. That’s not what you’re going to get hit with, it’s the smart TVs, it’s the smart phones, that’s what’s spying. And that’s why they didn’t allow them in the White House by Bush’s second term. It’s why reporters would get on Air Force One and they’d say take your batteries off and put your batteries in this bag and your cell phones in that bag, and the bags were Faraday cages. The bags were lead lined or copper lined.

Paul, I know you want to add to this, but Trump is just, has bad advisors telling him because if they don’t know that it’s what the head of the CIA said six years ago, “We’re going to listen to you over your appliances”. They can listen over people, if they have power down, power line in the area and the right transformers, they can listen over light bulbs. Yes, through the new light bulbs. They can listen through anything, it’s all resonance. It’s all with sensors bouncing back up. These light bulbs have special sensors in them, and those sensors can also be tuned with the data over power lines to give them an image, it’s the same thing.

There’s thousands of ways as we get information singularity that they can listen to the President. He needs to know that it’s not the traditional person in the room, it is the AI robot, Paul Watson. What do you say to that my friend?

That’s right, ladies and gentlemen, it’s not the people, it’s the TV, maybe the microwave. I think Kellyanne Conway said people’s microwaves spy on them. It’s the cell phones, maybe there’s an Amazon Alexa in there that’s listening in and spying. And of course, as he says, you can watch the full clip in the link below, didn’t want to put it ’cause I didn’t want people to vomit, but AI robots. Those are the ones leaking all the horrible information about the Trump administration to the press. Thank God we’ve got somebody out there like Alex Jones telling us what’s really happening, ’cause up until now I didn’t know we even had fully functional AI robots here in the United States, let alone that they could be programed to go and spy on the President and that they were completely untrackable through any modern bug sweeping devices. Wow. Wow, ladies and gentlemen.

All right, but let’s get serious for a second here. What this does is it convinces Alex Jones’ followers, who are already a little unstable to begin with, that nobody is disloyal to Trump within this administration. It writes off all of those reports of leaks and people being unhappy with Donald Trump and wanting the truth to get out there, and instead makes it into some kind of sinister spying operation that people like Rudy Giuliani this week, are actually going out in the media and repeating. Saying that somebody, Obama’s FBI may have put an informant into the Trump campaign. Well, yeah, that’s a little more tame than saying that the robots are spying on Donald Trump, but it has the same effect. It undermines the fact that nobody working for this President respects him, nobody trusts him, nobody believes him, and they want the public to know the truth.

Human beings are the ones leaking this information because they despise the man in the White House. And when you spend all day with Donald Trump, working for him and still despise him, I think that speaks volume to the kind of person that he really is. So don’t go out there and poison people’s brains with the thoughts that their TVs or miniature robots are spying on them, when in reality it’s just people who want the public to understand the truth.