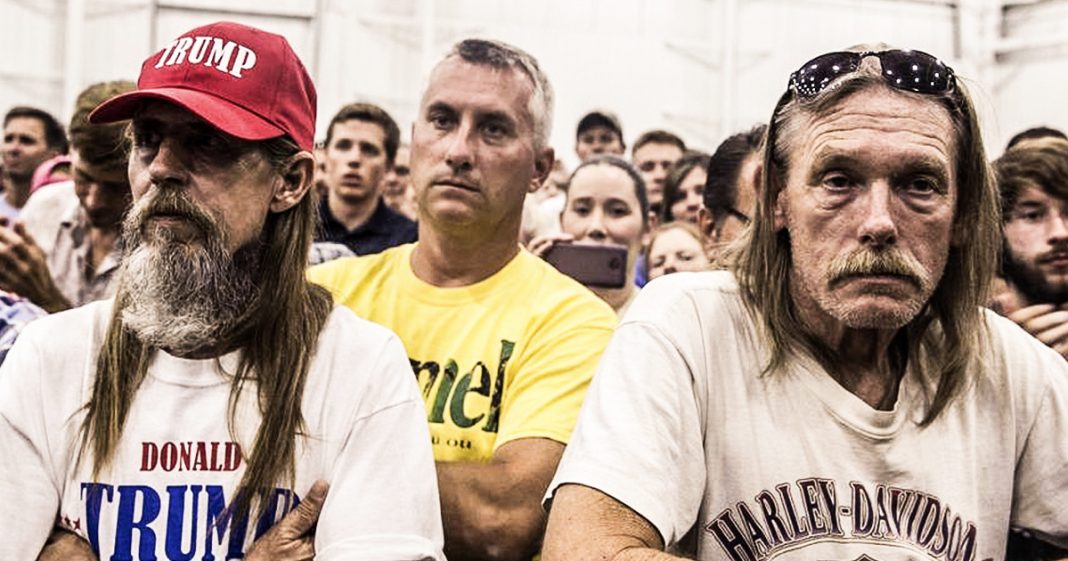 Many Trump supporters in the Midwest are starting to realize how stupid their decision to vote for Donald really was. And those are the words that THEY are using. They admit to feeling “stupid” and that they were “tricked by the devil” into voting for Trump now that his policies against seasonal guest workers and his trade war with China threaten to destroy local communities and small business owners. Ring of Fire’s Farron Cousins discusses this.

According to a recent report in a Midwest newspaper, Donald Trump supporters in the Midwest area feel like they have been tricked by the devil. Now, that is an exact quote from one of the Trump supporters that this newspaper interviewed. Another admitted that he feels stupid for falling for all of Donald Trump’s lies. Now, this is not the typical Trump voters finally expressing remorse for their vote story. This story is actually a little bit more detailed and involved.

The reason that these people feel like they have been tricked or feel like they’re stupid for voting for Donald Trump is because they are the ones who are being directly affected in a negative way by Donald Trump’s policies. The people that this paper spoke to, the Lexington Herald Leader, they’re landscapers, they’re farmers, they’re people who rely on the H2B visa guest worker program who now may have to close down their businesses, shut down their landscaping organization, shut down their farms, because they can’t get any workers because of decisions from the Trump administration to limit those programs and limit the amount of workers that come over here to the United States.

These are jobs according to the Trump supporters that other people, American citizens don’t want to take. Either because they don’t pay enough, because the hours are too long, or because the work is just a little too strenuous and difficult. Guest workers, they’re willing to do anything because they desperately need that money. That’s why they come over here and do it. Yes, it’s wrong that they get taken advantage of by companies that do this, pay slave wages and give them horrible working conditions with no benefits, but Americans aren’t willing to do the work. It’s work that has to be done.

These businesses fund their communities. When they get money, they go and spend that money at another local small business, and so on and so forth. It’s the ripple effect through the entire economy. Now these people understand that the policies that Donald Trump, both with the guest worker program and with the tariffs that he is imposing that are hurting farmers all across this country, they know that he’s screwed them over and that he doesn’t care about them. Yeah, this story is a little bit different. It’s not the typical CNN panel of Trump voters who say, “I don’t like him anymore. The porn star thing threw me off.” These are people who understand that voting has consequences. Believing the lies of a Republican can and will directly affect your financial livelihood.

These people could lose everything that they have built their entire lives for, because they voted for a bigot who wants to keep immigrants out of this country for other people, because keep in mind, Donald Trump appears to only be hiring foreign guest workers at his properties, but that’s not good enough for anybody else. It’s only good enough for Donald Trump. You want to make your business successful? You got to bump your pay up, offer benefits, and pay more money so these American citizens will want to take those jobs. Yes, we should be doing that anyway. I also understand that there are some industries where it’s not possible. Lawn maintenance is one of them.

Without these guest workers, the US economy falters. Without immigrants, the US economy falters. We depend on them more than conservatives realize, and these people out here that spoke to the Lexington Herald Leader, they understand it better than anybody, because now they could lose everything just because they voted for a guy who promised to keep these immigrants out. To be honest, he followed through with that promise, but now they realize that they just screwed themselves and have no way out.