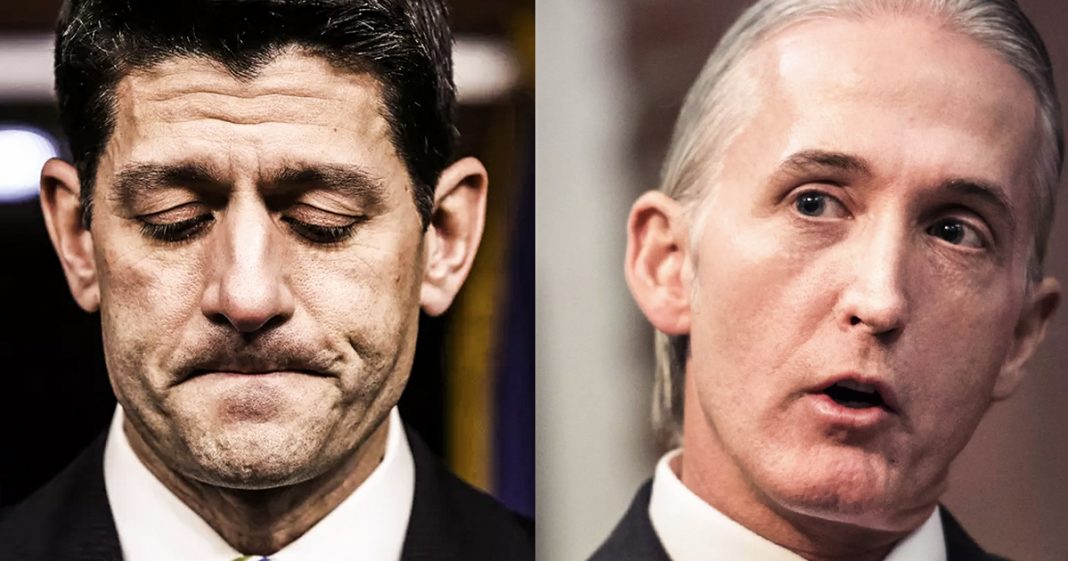 Apparently even the Republicans in Congress don’t trust Devin Nunes, as recent reports say that House Speaker Paul Ryan had to get Trey Gowdy to “babysit” Nunes during a recent meeting with the Department of Justice. Ryan was worried that Nunes would do something stupid and jeopardize national security, but also that he would make powerful enemies at the DOJ that could threaten the jobs of sitting members of Congress. Ring of Fire’s Farron Cousins discusses this.

A very interesting story developed over this weekend. See, at the end of last week, Devin Nunes, the guy who was chair of the Intelligence Committee in the House of Representatives, the guy who helped feed all of the information about the investigation to the Trump administration was set to go have a meeting at the Department of Justice with whom he has been publicly feuding for the last few weeks. See, Nunes wants to get his hands on some documents about the ongoing investigations into the Trump administration probably because, like everything else, he wants to go and run them over to the White House personally and try to get this entire investigation shut down. But, luckily, and I can’t believe I’m saying these words, House Speaker Paul Ryan stepped in and sent a babysitter along with Devin Nunes to make sure he didn’t screw things up while visiting with the Department of Justice. And, ironically, that babysitter, the guy that was supposed to keep Devin Nunes in line was Trey Gowdy, the guy who started all of the Benghazi nonsense who now says, “Yeah, we agree. Nothing happened in Benghazi. That was Hillary Clinton’s fault.”

You have these two hardcore, horrible right-wingers, Paul Ryan and Trey Gowdy, who at least have enough sense to understand that Devin Nunes might be a threat to the Republicans in the House of Representatives and that he might actually be a national security threat by trying to seek these highly classified documents that the DOJ, FBI and CIA have said, “If these are released, people are going to die.” It’s really sad when you have a guy like Paul Ryan and a guy like Trey Gowdy who have to look at their coworker, Devin Nunes, and say, “Wow, this guy is nuts. Somebody needs to go keep an eye on him so he doesn’t make things worse.”

Now, that’s just part of the story. The other part of it is if Paul Ryan and Trey Gowdy think that this entire investigation is not worthwhile, that it should be shut down and both of them have been pretty quiet about it to be honest. But if their lawyer, loyal Trumpers, why would they not want Devin Nunes to go to the DOJ and make a big stink about these documents? Could it be that they don’t want Devin Nunes to make a bunch of enemies in the Department of Justice who might then be willing to look into some of the more shady practices going on in Congress?

That’s my theory about all this. I think it has less to do with the fact that the DOJ says that these documents that Nunes wants are a national security threat, and I think it has everything to do with the fact that Paul Ryan doesn’t want the people in the DOJ to get mad enough to start looking into the corrupt practices that we have seen from Republicans and some Democrats for years now, the sexual harassment payoffs that they refuse to payback to the American taxpayers, the meetings with the lobbyists that they’re going to where sometimes they accidentally admit that they won’t let anybody in their office if they haven’t donated them campaign money. Yeah, those are the kind of things that the DOJ would probably be interested in but not if you’re their buddies. But if you send a moron over there like Devin Nunes to piss them off, you could be pretty sure that investigations into all of your corrupt practices are going to be right around the corner.