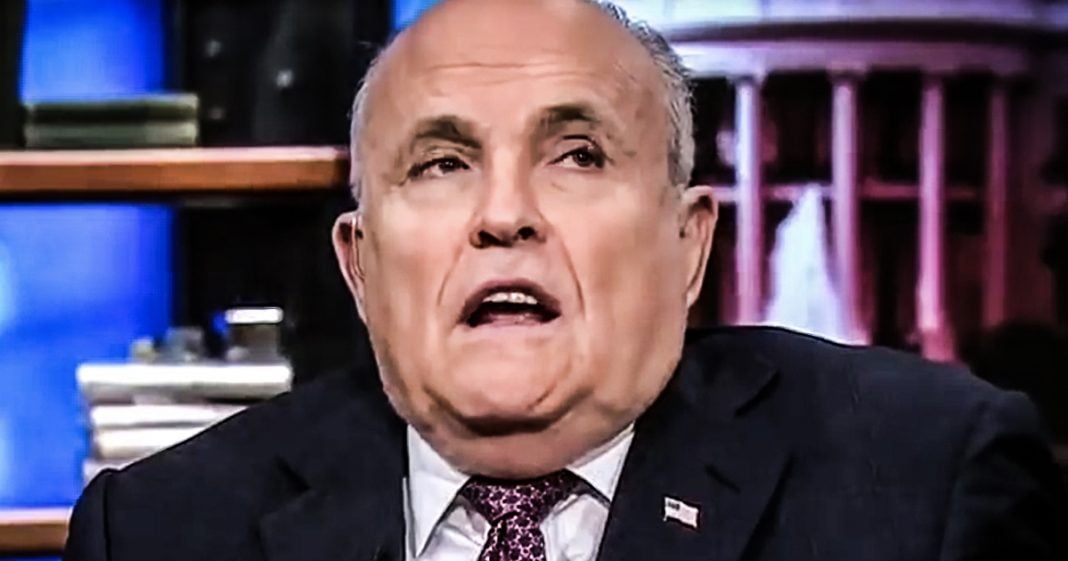 CNN’s Chris Cuomo decided to use Rudy Giuliani’s own words against him by showing an old clip of Giuliani saying that the President must appear if he gets subpoenaed. Giuliani promptly freaked out on the air, saying that airing clips of him from the past was “really unfair.” Ring of Fire’s Farron Cousins discusses this.

Rudy Giuliani decided it would be a good idea to attempt to navigate the unfriendly waters of the media outside of FOX News. On Friday morning, he made the decision to go on Chris Cuomo’s show, where he insisted that you cannot subpoena a president, a sitting president. Well, unfortunately, for Giuliani, Chris Cuomo and the team at CNN was actually well-aware of comments that Giuliani had made on Charlie Rose’s show in the past. When confronted with those previous comments that contradict his current comments, Giuliani absolutely flipped out. Take a look.

Rudy Giuliani: You can’t. You can’t. I never heard of the subpoena for the president’s person.

Rudy Giuliani: No, no.

Rudy Giuliani: Chris, let’s distinguish between a subpoena for documents and a subpoena that takes the president out of the Oval Office, and puts him in front of a grand jury or hearing. Can’t do it. Can’t do the second. You can do the first. President-

Chris Cuomo: But you never made that distinction before.

Rudy Giuliani: Well I never, never, never occurred to me they would try to subpoena the president.

Chris Cuomo: That’s exactly what was going on in 1998, but people are going to say I’m making this up.

Chris Cuomo: Here’s Charlie Rose with you in the interview and you tell me what you meant.

Chris Cuomo: What, you don’t want to hear it?

Rudy Giuliani: It’s not even relevant.

Charlie Rose: If the president is asked to testify, subpoenad to testify before a grand jury-

Chris Cuomo: No. I’m giving you a chance to explain it.

Charlie Rose: And says no, not gonna do it.

Rudy Giuliani: But with all that-

Charlie Rose: Not going to do it.

Rudy Giuliani (Rose Clip): You got to do it. I mean you don’t have a choice.

Rudy Giuliani: That promoting of Avenatti for ambulance chasing.

Male: What happens if Robert Mueller subpoenas the president?

Chris Cuomo: What does that have to do with this?

Rudy Giuliani: Because they’re all trying to bring Trump into that, and he’s not involved in it, Chris.

So in the mind of a guy like Rudy Giuliani, showing a clip of things you had said in the past is unfair. Using your own legal advice or opinions against you is somehow wrong? Here’s what’s funny about the whole clip, though. When you watch it, originally you see that Giuliani is still talking as they’re showing the old clip, but there’s no audio coming from him. What I’m assuming is that the producers decided to pot-down his mic so that they could just see his facial reactions when he hears what he had said, which contradicts what he was currently trying to say. But when they saw that he was absolutely freaking out, somebody in that control room made the decision to turn his mic back on so that everybody watching could see Giuliani freaking out and claiming that his past statements, this video of him from 20 years ago, was somehow unfair.

Now, you know what’s unfair, Giuliani? You going out there in the media and lying to everyone. You’ve been doing it all week long. Hell, you’ve been doing it for decades, but you’ve really hit a new low in this past week with all of the false statements that you are out there saying to the media. I guarantee you after this, and Giuliani hinted at it himself, he’s probably not going to come back on CNN. Giuliani’s going to stick to the more friendly waters of FOX News, where they won’t confront him about his lies. They’re not going to show old clips of him proving himself wrong. They’re just going to sit there with a smile, and let Giuliani says whatever he wants to to defend the President.