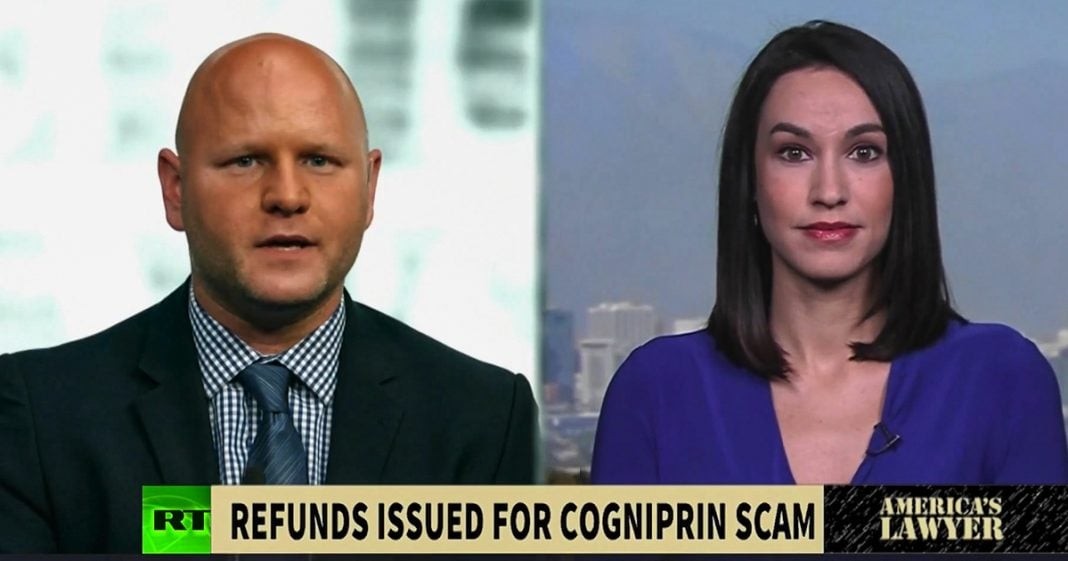 Via America’s Lawyer: Farron Cousins and Brigida Santos talk about a memory loss supplement that was falsely advertised resulting in $300,000 worth of refunds.

Farron Cousins: The Federal Trade Commission is sending $300,000 worth of refund checks to victims of a supplement scam. CogniPrin was advertised as a supplement that could dramatically improve the memory of anyone who took it. But as it turns out, it was a big, fat lie. Joining me to discuss this is RT corresponded Brigida Santos. Brigida, who was the company that sold these supplements? And what claims did they actually make about this product?

Brigida Santos: The company, Synergixx, is the company that actually makes these supplements. And Better Health Nutritionals is the company that sold them. However, both are listed as defendants in this lawsuit. Other defendants include a naturopathic doctor, some sort of fictional neurologist, and several other people, as well as the company’s owners. And what all of these defendants did was, they collectively claimed that two of their products, the first one being FlexiPrin, can relieve joint pain in up to two hours, and that their other product, CogniPrin, can help restore up to 12 years of memory loss and even improve memory by up to 44%. Now none of these claims have been backed up by any type of scientific data, so that’s why they’re getting in trouble here.

Farron Cousins: You know, it’s really interesting too because people need to understand, these multivitamins, the supplements, there is no agency that actually looks into the effectiveness of this. There is no testing procedure that they have to go through before these things make it to the shelf of your local pharmacy. I know a lot of the multivitamins, they’re good. Doctors say you should take one. But if it promises something like, hey, this is going to restore your memory, maybe take a second look at it. Maybe read some reviews. So you know the courts, they say that this company used this deceptive marketing campaign. So what exactly did the marketing look like? Was it different than just saying, “Hey, it’s going to boost your memory”? What were they doing to get people to take these supplements here?

Brigida Santos: Yes, they had a very, very elaborate plan, all of these defendants. And by the way, they did violate several state and federal laws in carrying out these practices. Mainly, the worst one is that they created 30 minute radio spots, and instead of disclosing that they were advertisements, they marketed these as if they were educational programs. And these programs featured fake consumers who were endorsing this product, as well as claiming to have an objective doctor on these advertisements. But that doctor was not objective. They were getting a cut, a percentage of all CogniPrin sales. And this person had never even medically evaluated either of the products. There was also somebody pretending to be a neuroscientist and saying that he was from some fictional neurology lab, one that just completely does not exist, and several other things that they did that were very dishonest.

Farron Cousins: Could you explain for the people watching, who may not be familiar with these procedures, why the FTC is paying for the refund and not the company here?

Brigida Santos: Technically, the company is paying, but because the FTC and the State of Maine are the ones who brought this lawsuit forward on behalf of the consumers, there was a settlement. And out of that settlement, these companies now have to pay back the FTC and the State of Maine. But the FTC is the one that’ll be doling out those refund checks, and they have already begun to do that. I believe about 2000 checks will be going out for over $350,000.

Farron Cousins: When and how was the scheme discovered? And what do the courts demand from these defendants?

Brigida Santos: This lawsuit is dated back to August of 2017, and the courts are demanding that these entities stop all of their illegal marketing activities and business practices, that they take these products off the market immediately, and that in the future if they want to market new products, they have to disclose that these are advertisements and they have to back up all claims with actual, real scientific proof.

Brigida Santos: No. There’s nobody looking over their shoulder. And not only that, certain laws prevent the Federal Drug Administration from even evaluating these products for safety before they go on the market. They can only get involved after these products have already been flagged as dangerous, which I think is very bizarre, and that’s why you have so many different types of dietary supplements on the market. And as long as these companies are not directly saying, “This will improve memory,” instead they can say, “This can improve memory.” It’s in the wording. So then somehow it makes it less shady. But people do get sick. And in fact, they take supplements and end up vomiting or having weird side effects because they are completely unregulated.

Farron Cousins: What’s really interesting here is the fact that the supplement, the vitamin industry, and I’m not saying that all vitamins are bad, it’s just that most of them cannot be properly processed by the human body in pill form. But as far as these supplements go, these are multi billion dollar industries. They pull in billions of dollars every year. They get to go out there, make all these lofty promises. They do not necessarily have to back them up with any science in order to get on the market. So just real quick in the minute we have left. Do you see any change in the way we regulate these things? Do you see anything like that on the horizon? Or is this, we have to wait until lawsuits are filed to get anything done about it? Is it one of those situations?

Brigida Santos: Yeah. I don’t see any regulations coming down the pipeline. Unfortunately, this just simply encourages bad actors to get into this multimillion dollar industry to make these faulty claims and dupe consumers out of their money, for people who are trying to solve problems like chronic joint pain or memory loss. These are very serious conditions. And making claims that these products can actually help you when they actually do nothing is really something that should be regulated, but I do not see anything coming down the pipeline.

Farron Cousins: Brigida, thank you very much for telling us this story today.