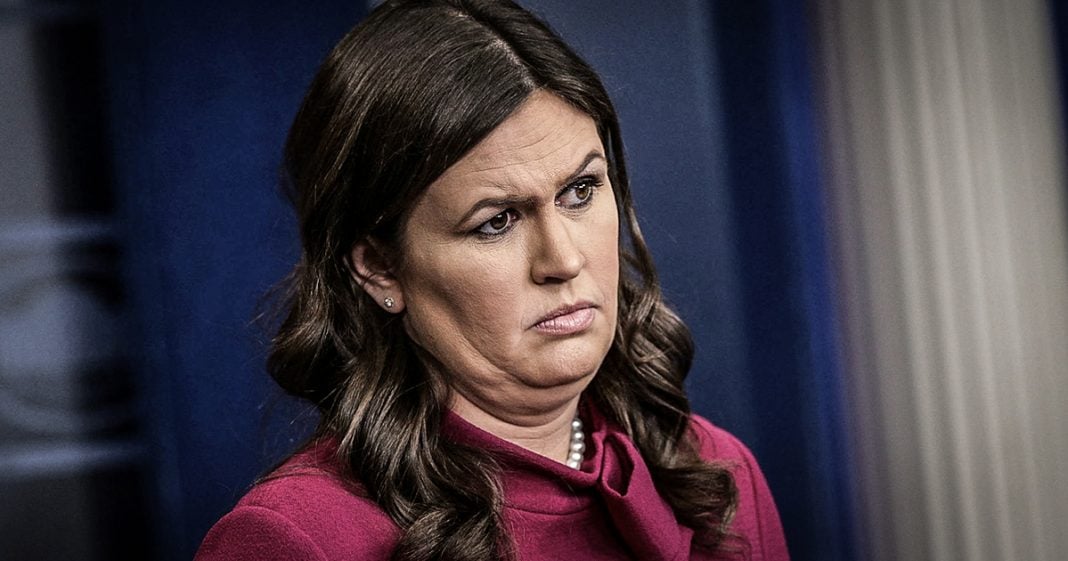 According to a reporter at Politico, the buzz in DC says that Sarah Huckabee Sanders could likely be let go from the White House in the very near future. DC insiders believe that the cancelling of press meetings within the office and Trump’s growing anger over leaks could land Sarah in the hot seat, but given how loyal she is to the President, her firing does seem unlikely. Ring of Fire’s Farron Cousins discusses this.

Is it possible that Donald Trump might be considering firing Sarah Huckabee Sanders? That’s the position that Politico’s Annie Carnie took recently during an appearance on MSNBC’s Hardball when she said that DC insiders are talking about the fact that Huckabee Sanders is very likely on the chopping block and might be axed from her position as White House Press Secretary by the end of the summer, if not before then.

Now, let’s keep in mind, Sarah Huckabee Sanders has had this position for less than a year and she is already on Donald Trump’s bad side, according to this Politico reporter who spoke with insiders in DC and possibly even sources at the White House. And actually, her position makes a lot of sense when you consider the fact that Donald trump is angry about all the leaks coming out of the White House. We know somebody from the communications office leaked Kelly Sadler’s statement about John McCain to the press, so we know there’s at least one leaker in the communications department, and because of that, they’ve actually stopped holding meetings because they’re so afraid that whatever’s talked about is going to get leaked to the press.

So Trump and Huckabee Sanders understand that there is a leak within the communications department. Somebody there brave enough to give the press accurate information, ’cause God knows Huckabee Sanders isn’t going to give it to us. So could Donald Trump actually be considering firing Sarah Huckabee Sanders? Honestly, I don’t think so. I think that is probably one of the last people that Donald Trump would ever fire from his administration.

I’m pretty sure everybody agrees that Huckabee Sanders, given her track record defending Donald Trump, probably not the leaker, right? She is more like a Kellyanne Conway type character. Been around for a long time, last in this position a hell of a lot longer than anybody else who had it previously, and she has absolutely nor problem going out there every day and lying on behalf of the President to make him look better. That is the kind of loyalty that Donald Trump values above anything else in life, other than money. Kellyanne Conway does it, that’s why she’s around.

So I have no reason to think, regardless of what the DC insiders are saying, that Sarah Huckabee Sanders is going anywhere. She would have to voluntarily quit, or suddenly develop a conscience and a moral compass in order for Donald Trump to want to get rid of her. I don’t think she’s going to leave voluntarily, and I certainly don’t think that she is about to develop any kind of morals to speak of. She’s not going to suddenly walk out to that podium during a press briefing and start telling us the truth about the chaos within the Trump administration.

So her job, regardless of what the insiders say, I think, is completely safe. We’re going to be dealing with many, many more months, possibly even years of Huckabee Sanders acting as the face of this administration and the number one liar from the Trump administration.