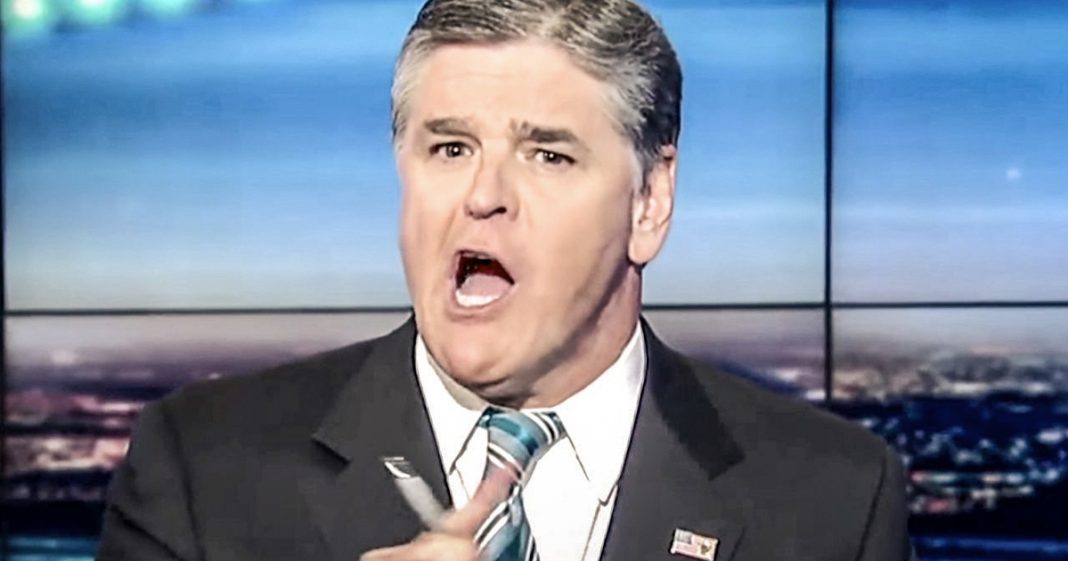 Fox News host, Sean Hannity, has absolutely had it with the Mueller investigation. It’s gone one for a year and a day now, a year and a day. Can you imagine the audacity of these people? It might eventually even cost us $10 million, which if it drug on for another eight and a half years, would be more expensive than the total number of golf trips Donald Trump has taken in the last 15 months. That’s a lot of money, folks.

On Thursday night, Sean Hannity, right before he had Rudy Giuliani on to make an ass of himself, decided to give his opening monologue about what a threat this Mueller investigation is, not to Donald Trump, but to the American Republic. Take a look.

Sean Hannity: And it’s now costing you, the American taxpayers, what President Trump is saying could cost upwards and above $10 million. Now because of all of these facts, President Trump’s legal team is no longer sitting back and watching Mueller and his deep state operatives and this whole disaster unfold. Yesterday we did learn that the special council is no longer considering indicting the president. Okay. Well, we’ve been telling you this over and over and over that it’s impossible for constitutional reasons, as we have explained. And although this is impossible, there’s no constitutional precedent to ever even consider this.

There are long established DOJ guidelines that we have explained already in place. And former New York City mayor, the president’s lawyer, Rudy Giuliani, also pointing out that Mueller might not even be able to issue a subpoena, because the president’s legal team has already handed over, over a million documents. In other words, Mueller already has everything that they have requested. And the only point of a presidential interview is to set a perjury trap. Now this witch hunt is now a direct threat to this American republic. Mueller is causing irreparable damage to the rule of law in this country.

All right. Let’s get a few things straight because you made a lot of false claims in that little clip there, so we want to make sure we address all of them if we can. First and foremost, how is this a threat to America? That’s what I don’t understand about any of these republican arguments and even some of those on the left about the Mueller investigation. If Trump committed no crimes, if nobody else in his administration committed a crime, other than the five people who’ve already pleaded guilty, how is it a threat? It’s just some dude looking at things, that’s not going to find anything. That doesn’t threaten anything or anyone. If you know there’s nothing there for him to find, just say, “Whatever. You go read your stuff. Investigate, whatever. I’m going to go president some more.”

It’s that simple. It honest to God is that simple. If you want it to end, as Fox News and the Trump administration and Giuliani want it to, that’s because you’re afraid of what’s going to be found. It’s that simple again. And second of all, let’s address the big talking point in the room, and that is the fact that earlier this week, Giuliani said that Mueller told him, or at least Mueller’s team told him, that they were not going to indict Donald Trump. But let’s clarify that statement. He didn’t say they cannot. They said, “We’re not planning to at this point.” It leaves the door open for a future indictment. It doesn’t say that it’s never going to happen, yet Giuliani is out there misrepresenting what Mueller’s team allegedly told him, which I don’t even buy that.

No. Congress usually gets the jump on it, understands indictments are coming, goes ahead with impeachment based on evidence that they obtained from prosecutors. And then once that’s all finished, the prosecutors then go ahead with the indictment. Sitting presidents can constitutionally and legally be indicted. They can be put on trial while still operating as President of the United States. Oh, and contrary to what Trump and republicans would also tell you, they’re not immune from civil lawsuits either. Bill Clinton had to go through several of those, and every time judges ruled that yes, you can file a civil lawsuit against a sitting president. So I suggest folks like Sean Hannity stop freaking out about the Mueller investigation and perhaps read some legal scholarly articles about the situation, because you morons have absolutely no clue what you’re talking about.