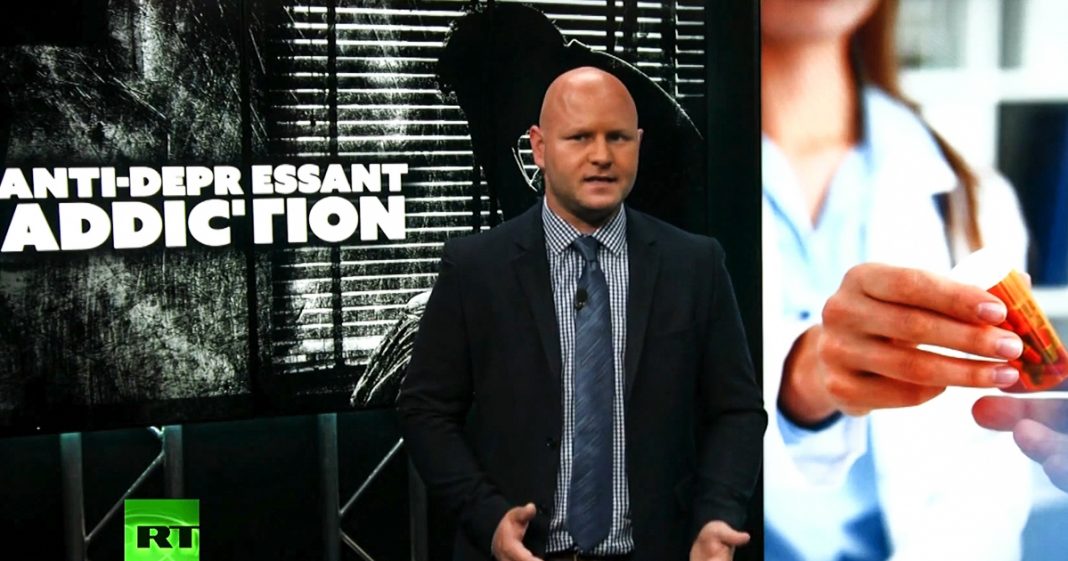 Via America’s Lawyer: Farron Cousins and Martha Rosenberg discuss how depression was sold as a disease to make money and how many drugs are now affecting the water in the environment.

Farron Cousins: In the early 1990s, drug companies began pushing a relatively new line of drugs on the American public. These drugs are called SSRIs and they’re designed to regulate serotonin levels in order to curb depression. Drugs like Prozac and Paxil got off to a slow start when they were first introduced, but thanks to a combination of deceptive and clever marketing, big pharma soon saw their pills reach blockbuster status. So, let’s start with the first issue with these anti-depressant drugs, the deception. In order to show that these drugs were effective, drug companies actually suppressed unflattering data that they obtained during their clinical trials. Data that showed that these drugs were only about 33% more effective than sugar pill placebos. So, they hid the bad data, padded the good and soon millions of people were being told that these SSRIs would put a smile on their face and that life would be great.

The only problem, aside from the lies, was that people had to go to their doctor without any knowledge that these SSRIs every existed, making it harder for drug companies to get the word out about their alleged miracle pills. But all of that changed when the United States lifted their ban on direct to consumer advertising and soon you couldn’t turn on your TV without seeing an ad for a drug that promised to relieve you of all the pain and sorrow in your life. In the years that followed, tens of millions of American citizens went to their doctors to get their hands on these magic pills. Many of whom did not actually need to be on them. In 2015, one in four women in the United States were taking an SSRI just to give you an example of how widespread their use has become.

And like most drugs, these SSRIs come with very severe side effects, that the drug companies were hoping they could keep quiet, but in spite of their massive payoffs to researchers and the revolving door at the FDA, the public soon learned just how dangerous and addictive these anti-depressant medications truly were. Joining me now to discuss the dangers of these anti-depressant medications is Martha Rosenberg, author of the book Born with a Junk Food Deficiency.

So Martha, let’s start by talking about how these drugs became so popular in the US. It seemed to happen right around the time that this direct to consumer advertising was allowed in the US. What are your thoughts on that?

Martha Rosenberg: Well, yes Farron, you’re absolutely right. the selling of these drugs correlated with the ask your doctor ads on TV, which began in the late 90s, and what they did with the SSRIs and they’ve done with other drugs, is they’ve actually sold the disease to sell the pill. So, they actually sold depression. As you well noted, you’re not sad or bad mood because of what’s going on in your life. You have depression. And they actually sold the disease and told people they had it. They also said, they being pharma, setup screening stations so that you could find out if you were depressed as if who wouldn’t know. But they sold depression and one thing that I’ve noticed a lot in recent years is how they’ve sold it as a lifelong condition when it used to be limited in short term.

Farron Cousins: And what’s really interesting when you talk about them selling the disease here, is when you think back to those commercials that they had. The little ball that was running around or rolling around so sad. They said “Did you lose interest in things that you used to like?” Well, guess what? Now you’ve gotta take our miracle little pill here. So, drug companies, as they often do, they attempted to hide some of their clinical studies about the effectiveness of SSRIs. How effective are they actually? You’ve looked at the studies, so are these drugs as effective as big pharma was telling the regulators and telling the American public here?

Martha Rosenberg: Well, they’re absolutely not as effective. And first of all, because they’re predicated on what we call the serotonin theory, which is not only never been proved, it’s kind of been disproved. So, that’s the first reason they’re not effective, but secondly, there’s been studies that show that they’re effective for maybe severe depression, but not for mild and there’s been other studies that have shown they’re not effective at all. They’re literally as effective as placebo. Now, recently, I think the last few weeks, a study came out in Lancet, which is a medical journal, that claimed that all those studies were wrong. That actually these pills are great and the office had 25 financial links to big pharma. So, it’s a big franchise for them.

Farron Cousins: So, let’s get into the dangers of these drugs. What kind of problems are these drugs causing in humans. I know there’s a lot of other things, but what are we seeing so far in human beings? What’s happening when they stay on these SSRIs for a period of time?

Martha Rosenberg: Well, Farron, one of the issues about this is because up until the SSRIs, people were not on anti-depressants for decades. There really aren’t studies. Literally, the people who are kept on these drugs are the guinea pigs. A lot of the results of being on the drugs for so long, we don’t know. But we do know that they cause obesity, they cause sexual dysfunction. Paxil causes birth defects in pregnant women and we do know that. One thing that we’re beginning to see that, again, you wouldn’t now because there’s never been people on the drugs for so long, are fractures. And many people now are fracturing their wrists, their ankles, their bone mineral density is becoming depleted from the SSRIs and again, they’re the guinea pigs.

Farron Cousins: That’s really sad to think about too, pharmaceutical companies have years and years and years to test these drugs. They have to submit this information to the FDA, but when they falsify it and the FDA goes ahead and approves it anyways because they’ve hid the negative studies, we don’t learn about the side effects like we’re supposed to. Basically, they’re taking away the choice of the consumers when they go to the doctor and say “I want this medication.” They’re not able to make an informed choice, because that pharmaceutical company lied to the FDA. Their sales people are going out there lying to the doctors every day about the effectiveness and the side effects of these medications, so they’re taking away the right of consumers to be able to make an informed choice.

Martha Rosenberg: Well, obviously sewer systems, waste water systems were created before everybody was on a drug, or as you said, one out of four women are on these drugs and they don’t filter out. The drug metabolites in the drinking water and certainly in the unfiltered water, the waterways and the oceans and rivers and there’s been many, many reports or fish actually effected. They actually say fish on Prozac because so many people are on these darn drugs and they’re in the water now and some of the effects of these drugs on the fish, that I’ve read about, are that the fish are no longer afraid of predators. They’re bold, they don’t have their normal inhibitions because they’re on these drugs. So, that’s a side effect that people haven’t even talked much about. The environmental. And of course, I have to add, it’s not just the SSRIs, they’ve found statins in the water, they found blood pressure pills. What pharma’s done is it’s gotten so many people on pills that it’s an environmental issue now.

Farron Cousins: That’s a great point to bring up as well, a lot of these medication, as you point out. It’s not just the SSRIs. We’ve got blood thinner showing up in water tests around this country because big pharma has basically got nearly everybody in this country on some kind of medication. We’ve got antibiotics in the water because it’s passing through people and going in there. That’s just one of the things that helps leads to these drug resistance, new strains of diseases because they’re already exposed to it before they even get into the human body. But the newest problem that we’re seeing now with this class of drugs, the SSRIs, is the addictiveness. So what can you tell us about the addictiveness of these medications?

Martha Rosenberg: Well, recently the New York Times ran an article about the difficulty including these SSRIs and how patients have been angry that their doctors didn’t tell them “I’m putting you on this, but it’ll be really, really difficult to get off”, and there’s several reasons why they’re difficult to quit and I’ve interviewed patients who can’t get off the drug. There’s a host of side effects, one of which is electrical currents in the brain that feels like electrical jolts and people don’t wanna get off the drugs because of those. And then there’s other side effects just because you’re brain chemicals have been so disrupted that going back to normal is gonna be almost like detoxing from any drug. And so, people can’t get off the drugs and so when the New York Times published a piece about the difficulty getting off … I might add how some of these school shooters were trying to get off and it made them violent. But, when they New York Times published this, there was 35 pharma-paid psychiatrists who objected to the implication that these people were hooked, which they are, and they also said “Well, this is a lifelong condition, depression”, which it never was until it was monetized by pharma.

And there’s a huge backlash claiming that they’re not addictive, which they are.

Farron Cousins: As I mentioned earlier, a lot of people when they think of the addictiveness of drugs, right now obviously opioids have take all the headlines, and that is a massive problem. That is something that needs to be addressed. The administration that we have in power right now is not taking it seriously whatsoever, but that’s not the only one. These SSRIs, these direct to consumer advertisements that we see all the time telling people, not asking them if they’re depressed, they’re telling them they’re depressed. They’re listing the daily symptoms of being a human being as if that’s something that needs to be medicated. They did it with testosterone, they’re doing it with SSRIs, they’re doing it with chronic pain, they’re doing it with everything they can to keep us on these medications. Martha Rosenberg, thank you very much for telling us this story today. Always appreciate talking to you.