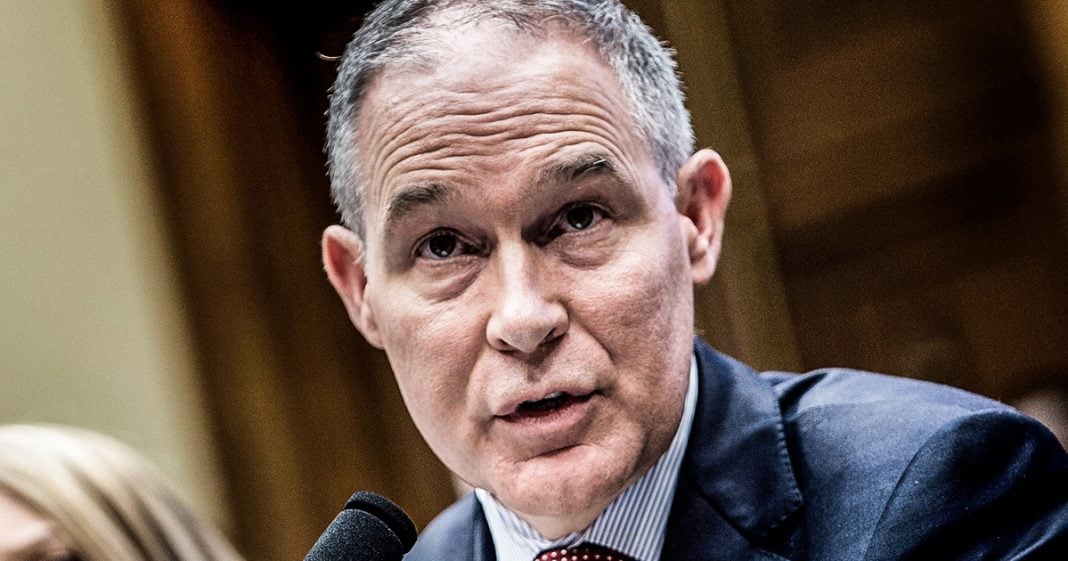 EPA Administrator Scott Pruitt just admitted that he committed a crime while he was testifying before the Senate Appropriations Committee this week. Pruitt admitted that he had a staffer go house-hunting for him and that he never compensated the staffer for his time and effort, meaning Pruitt accepted an unauthorized gift and misused the power of his office. Will he be removed from office? That’s unlikely, as Ring of Fire’s Farron Cousins explains.

Speaker 1:
This week Scott Pruitt, the Director of the EPA, was called to testify before the Senate Appropriations Committee because they wanted some answers about the spending scandals that this guy just can’t seem to stop getting himself involved in. But, one of the other things that came up during that testimony was the fact that Pruitt was using his staff members to basically be his personal errand boys to do things for him off-the-clock, which is a felony. Oh, and also Pruitt freely admitted that he did that.

Take a look at what Pruitt said during his testimony while he was being questioned by Democratic Senator Tom Udall.

Tom Udall:
It’s been reported that a member of your staff, one who got a 33% raise to over $114,000 earlier this year, house-hunted for you during work hours. This would be a violation of federal rules, as well as a misuse of taxpayer dollars. Did your staff contact realtors and arrange tours for you during working hours? Yes or no? Answer the question.

Scott Pruitt:
It’s my understanding that all activity there was on personal time.

Scott Pruitt:
As I indicated, it’s my understanding that all activity there was on personal time, and the individual that you’re referring to is a long-time friend of my wife, and myself, so to link any type of review on a pay increase is just simply not substantiated. It’s not related at all.

Tom Udall:
You know you’re an Attorney General. Were an Attorney [inaudible 00:01:28]. You’re a law enforcement official. CFR regulations prohibit directing a subordinate to do personal work for you, and if they volunteer that is a gift. Services must be paid for at fair market value. So, it doesn’t cut it that they’re a friend, or that kind of thing. Did you pay them at the time for doing that work?

Scott Pruitt:
All activity that I’m aware of that was engaged in by the individual you’re speaking about occurred in personal time.

Tom Udall:
And did you pay them for it?

Scott Pruitt:
No, I did not.

Tom Udall:
Then that’s a gift. That’s in violation of federal law.

That’s pretty cut and dry if you ask me. Udall made it clear that what you’re saying is a violation of federal law. It’s a felony. “So, you broke the law, yes?” And Scott Pruitt says “Yeah, but it was after hours.” “Okay, well did you pay them for it?” “No, I did not.” “So, therefore it’s a violation of federal law because you accepted a gift that was not authorized.” Scott Pruitt broke the law. He’s probably broken the law many times, but he just admitted it in front of the Senate Appropriations Committee. So, the question I have is why are there not more members of Congress, members of the Senate, and in general people from the public demanding that this jackass resign immediately?

He admitted that he broke the law. He shouldn’t be allowed to walk back into his office at the EPA because he should be in a holding cell at a local jail, but instead nothing will happen. It will take a miracle for members of Congress to ban together and force Scott Pruitt out of the EPA because Republicans don’t want to touch him. Regardless of all of the scandals surrounding him, he is still fulfilling their wish list as the head of the EPA. The Koch brother wish list, the fossil fuel industry wish list, the chemical industry wish list, so they’re not going to get rid of him at all. They don’t want to touch him because he’s still doing what they want him to do, and when you’re a loyal Republican stooge fulfilling that agenda it doesn’t matter how many scandals you’re involved in, it doesn’t matter how many felonies you commit, they’re going to do everything they can to protect you, and that’s what’s happening right now with Scott Pruitt.