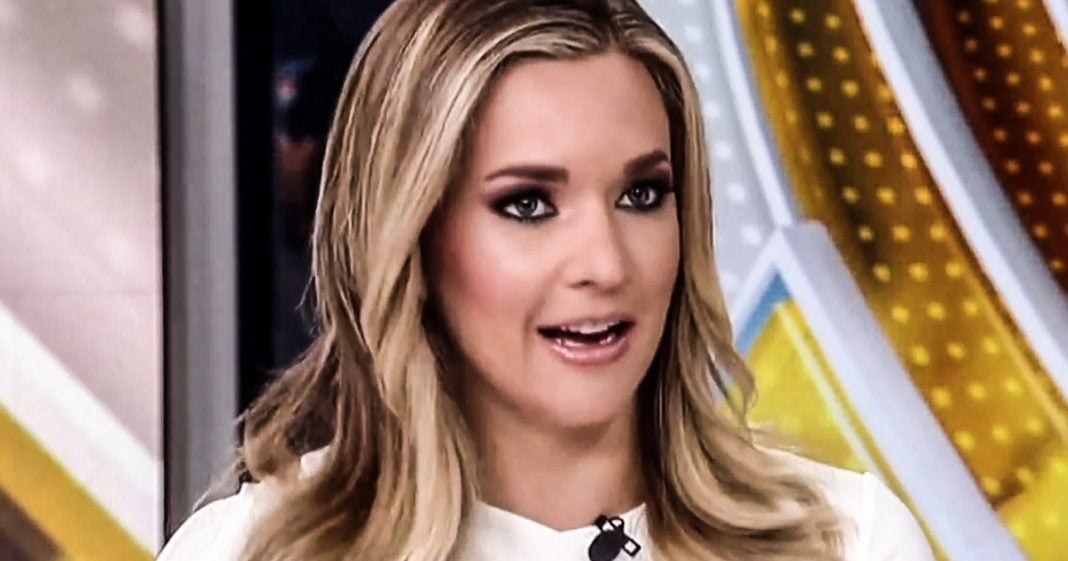 According to Fox News host Katie Pavlich, the meeting that took place in Trump Tower between Donald Trump, Jr. and Russian lawyer / self-admitted spy Natalia Veselnitskaya was likely arranged by Hillary Clinton in order to get dirt on the Trump campaign. The hosts on Fox News are driving themselves insane trying to deflect from the nonstop Trump scandals, as Ring of Fire’s Farron Cousins explains.

Earlier this week the transcripts from some of the congressional testimony of people who have testified from the Trump campaign, Donald Trump’s friends, about potential collusion between the campaign and Russia. Those transcripts were released, and one thing we learned was that it was all Hilary Clinton’s fault. Now that actually wasn’t in any of the transcripts, but that’s what the good folks over at Fox News got after reading through all those transcripts, that this was somehow Hilary Clinton’s doing. Take a look.

Katie Pavlich:
Well, reading the transcripts it seems like Don Jr. thought that this was a meeting where he was going to get information that turned into a lobbying effort by Natalia Veselnitskaya, and that was it. It was something that they said that they were doing and they kind of turned it into something else; but when you get further away from it and you get a year, two years past this meeting and the information that we have outside of it, let’s not forget that Natalia Veselnitskaya admitted she was a spy a couple of months ago. We know that, but the most interesting part is that Glen Simpson, who was the co-founder of Fusion GPS, was part of writing this unverified, salacious dossier about the president, met with her before the Trump Tower meeting with Don Jr. and after the meeting, which makes me think this wasn’t about giving Don Jr. dirt. This was about her going into Trump Tower and trying to get dirt on the Trump campaign.

Speaker 3:
Trying to infiltrate. Right, to extract something.

That’s right. That meeting that Donald Trump Jr. attended with Jared Kushner and Paul Manafort with Natalia Veselnitskaya … is how you pronounce it there, Katie Pavlich … that was all Hillary Clinton doing that. Yeah, she wanted dirt on the Trump campaign. Somehow in the crazy minds of Fox News hosts, she coordinated with a Russian lawyer who is now admitted that she’s also an informant for the Russian government to get dirt on the Trump campaign. I don’t even know how a crazy a human being has to be in order to try to make that jump of logic there.

But that’s what’s happened at Fox News, there’s no longer even the semblance of trying to be normal. They are doing whatever they can to deflect away from the non-stop scandals of the Trump administration. And yeah, the testimonies that were released, those transcripts, those are a big deal. It shows that Donald Trump Jr. definitely met with that Russian lawyer because he thought he was getting dirt on Hillary Clinton. The emails that Trump Jr. himself released showed that he 100 percent met with that lawyer to get dirt on Hillary Clinton. Jared Kushner went to that meeting hundred percent expecting to get dirt on Hillary Clinton, according to those transcripts. One of Donald Trump’s friends set up the meeting, not Hillary Clinton. That’s in the transcripts. The dude was called to testify before Congress, we know that. Yet this idiot on Fox News is telling us that somehow, in some way this was Hillary Clinton’s doing. She’s the one who set up the Trump campaign for failure, to be investigated by arranging this meeting that she actually had nothing to do with.

The people at Fox News have lost their collective minds. They’re not even afraid to show that anymore. They want you to understand how crazy they are. They’re so crazy because they have bet everything on Donald Trump, and every day just keeps getting worse for them. They have nowhere else to turn. They have nowhere else to deflect to, so they try to make up these insane conspiracy theories to keep their viewers hooked, thinking that Hillary Clinton is still the biggest, baddest, worst human being to ever walk the planet. Well, guess what, your candidate, your guy, the one that you defend every day, I’m pretty sure that he’s a lot worse than Hillary Clinton could ever even hope to be. How about you stop obsessing over the Clintons and maybe occasionally, every once in a while if you could, talk about the fact that Donald Trump is in very serious legal trouble, as is the rest of his family.