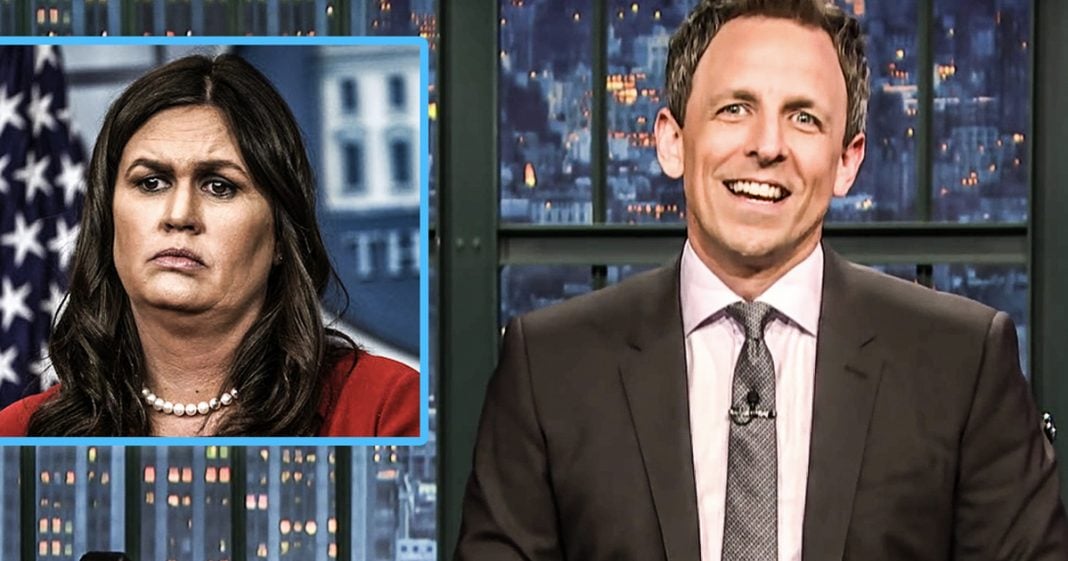 Seth Meyers found a clever way of finally getting Sarah Huckabee Sanders to tell the truth, and on a recent episode of Late Night, he aired a clip showing her answering his questions as honestly as possible. Ring of Fire’s Farron Cousins explains how comedians like Meyers and many others are the last breath of sanity in this country today.

Sarah Sanders: Nothing more than a poorly executed PR stunt.

Seth Meyers: Can you tell us, why does the President keep attacking Robert Mueller on Twitter?

Sarah Sanders: The President does not have a lot of respect for people whose sole job is to carry out the law.

Seth Meyers: If you’d only name one, what’s the biggest weakness of the Trump administration?

Seth Meyers: What do you think the future of this country looks like?

Sarah Sanders: I don’t know that there will be one by the end of this year.

Seth Meyers: When I look into your eyes, I sense a deep sadness, why?

Sarah Sanders: I spend more time with the President than anyone else.

Seth Meyers: What do you call the rules outlining when Eric is allowed to come out of the basement?

Sarah Sanders: Certainly, we have confidence in the number two.

Seth Meyers: What was the name of Michael Cohen’s band in college?

Seth Meyers: If we do ever get to see the nude pics of Trump that Stormy Daniels claims to have, what do you think it’ll look like?

The thing I love so much about this video is the fact that everyone knows that Sarah Huckabee Sanders is a liar. I mean there’s no question about that. We know it. The thing is she doesn’t have to be. If she doesn’t want to answer questions that are a little too tough, then don’t. Just say, “I’m not going to address that and move on,” but instead she makes the choice to go out there and lie on behalf of the President, lie on behalf of the administration, lie on behalf of the Republican Party. Too few people are willing to go out there and admit that, “Yeah, she’s just a liar.” That’s why people like Seth Meyers, Samantha Bee, Michelle Wolf, Jimmy Kimmel, that’s why they’re so important right now. It’s a little breath of sanity in an otherwise insane world.

More importantly, these people, these comedians are actually doing the job that the corporate media should of been doing since day one of this administration. It’s really sad when we have to put our faith and hope for the country in comedians and late night talk show hosts, rather than the media, whose job it is to keep us informed and to hold those in power, accountable.