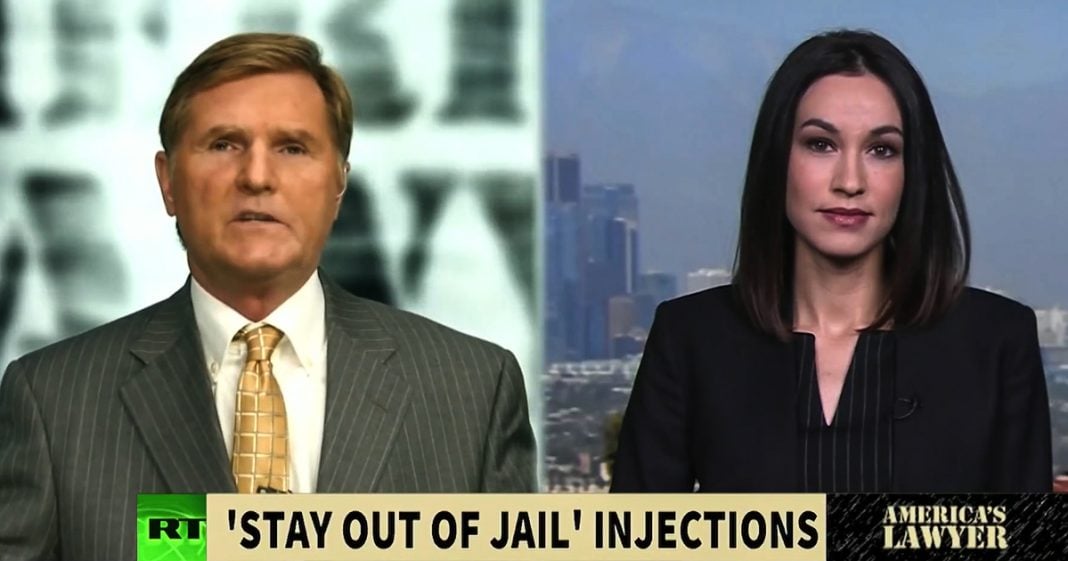 Via America’s Lawyer: Mike Papantonio talks with Brigida Santos about a new ‘stay out of jail’ sales pitch approved by the FDA for a famous schizophrenia drug.

Mike Papantonio: The FDA is now allowing Johnson & Johnson to market their schizophrenia drug as a drug that can keep schizophrenics out of jail. Schizophrenia, unfortunately, is considered to be an illness where one of its major side effects causes the sufferers to go to prison, apparently, if you follow this story. The company believes that their new marketing rights will of a great service to patients who want to avoid getting locked up. Some health professionals view this newly approach sales pitch, this disgusting sales pitch as depressing, and it really is. Joining me to talk about this is RT correspondent Brigida Santos.

Brigida, it never ceases to amaze me how the pharmaceutical industry will go to any depth, whether it’s off label, whether they’re telling somebody you can use this from something that it wasn’t approved from, whether they put it out on the market knowing that the clinicals are bad. It’s a tough call for me. Is it Wall Street financial banksters, or is it the pharmaceuticals industry that is the worst of the worst where it comes to corruption of the process of our democratic process? It’s a hard call for me. How did the FDA come to making this decision, Brigida? What’s your call?

Brigida Santos: A subsidiary of Johnson & Johnson conducted a study following 444 with schizophrenia who had been arrested at least two times in two years where one of those led to incarceration. Now what they found was that the participants who had been given this Johnson & Johnson injection of a drug called Invega Sustenna, they went on average 416 days longer without an arrest than their counterparts in the study who had taken a daily antipsychotic pill. Of course, the FDA sees this as a success, and it wants to help Johnson & Johnson better market the drugs, so that doctors will be more likely to prescribe it. Now this is an injection, so it’s a little bit … Patients aren’t necessarily more likely to want to take it because it’s an injection, so they want to help get this out to people more.

Mike Papantonio: Two thoughts come to my mind. A, when the lawsuits start, and they will start because it’s Johnson & Johnson. There are more lawsuits against Johnson & Johnson than most pharmaceutical companies. We’re going to find that there’s probably a hustle on the clinicals. You have to really take a close look at the clinicals to even understand whether they’re telling us the truth about what they found. B, we’re going to find that the FDA as usual has an incredibly close relationship to Johnson & Johnson, and the FDA is going out of its way to help put another drug on the market, so Johnson & Johnson can make more money. We see it every single year with this new concept. We’re going to keep people out of prison, this is the big sale. The next thing they’re going to be doing is trying to sell this to state agencies. Gee, you need to use this. You need to solve the crime problem. You need to keep the prison problem under control. You need to use this, and you’re going to have legislators that actually say, “You’ve got to use this.” It’s going to look like One Flew Over the Cuckoo Nest where we have people so drugged up that they basically can’t operate. That’s where this is all going. In your take, what’s in it for Johnson & Johnson to get this kind of approval?

Brigida Santos: Market exclusivity. They get an extra three years where they get no competition on the market because that’s what the FDA is granting them. That means there will be no generic options, no competing drug companies. One single injection costs anywhere between $400, and $2,000, and more according to Medicare data, just depending on a patient’s dosage and on their insurance coverage. They’re going to make a ton of money from this. They first put this drug on the market in 2009.

Mike Papantonio: I’ve seen it so many times. Phone call takes place between Johnson & Johnson and some cat at the FDA, that they want that person’s help. The argument is, it’s called the revolving door. They don’t say to the guy who’s trying to push this through, “Hey, we’re going to give you a job.” They simple say, “By the way, when you leave the FDA you might want to come see us. We can give you a very big salary.” That’s the way it works. They don’t come out and use those words, but what they do is by implication they get a lot of these things done even when there are risks, and are there risks taking this drug? Are there any concerning side effects that probably we’re just seeing the leading edge of? What’s your take on that?

Brigida Santos: Of course. With any drug there are absolutely side effects. Unfortunately, schizophrenia is a very debilitating diagnosis. It causes people to break with reality. They suffer from delusions, hallucinations. Often times it’s hard to tell which symptoms are coming from the diagnosis and which ones are coming from the drugs. However, antipsychotics have a laundry list of very, very serious side effects including violence. When it comes to this drug, Invega Sustenna, according to the list that they have provided of side effects, this drug can include an increased risk of death, abnormal liver and heart problems, restlessness, Parkinson’s symptoms. The list goes on and on. I broke down the study here, and when you look at it the data shows that participants taking this particular drug reported more adverse events than their counterparts taking oral antipsychotics and even one death. There were no deaths on the other side, Mike.

Mike Papantonio: What you’re going to find is this. When it’s all over, they’re going to put this product on the market, try to make it into a cash cow. They’re going to make $1 billion here and a $1 billion three or four years in a row. Then when people start dying from all of those side effects, they maybe have to pay out one of those $1 billion, maybe $800 million. They’ve made a good profit knowing that this whole thing is absolutely unnecessary, that there are plenty of drugs on the market that deal with schizophrenia and that this whole thing is nothing but a side show, so Johnson & Johnson can make more money. When the politicians get involved we’re really going to see that they really pump up Johnson & Johnson by making some requirement that institutions have to use this. Don’t you see where this is going?