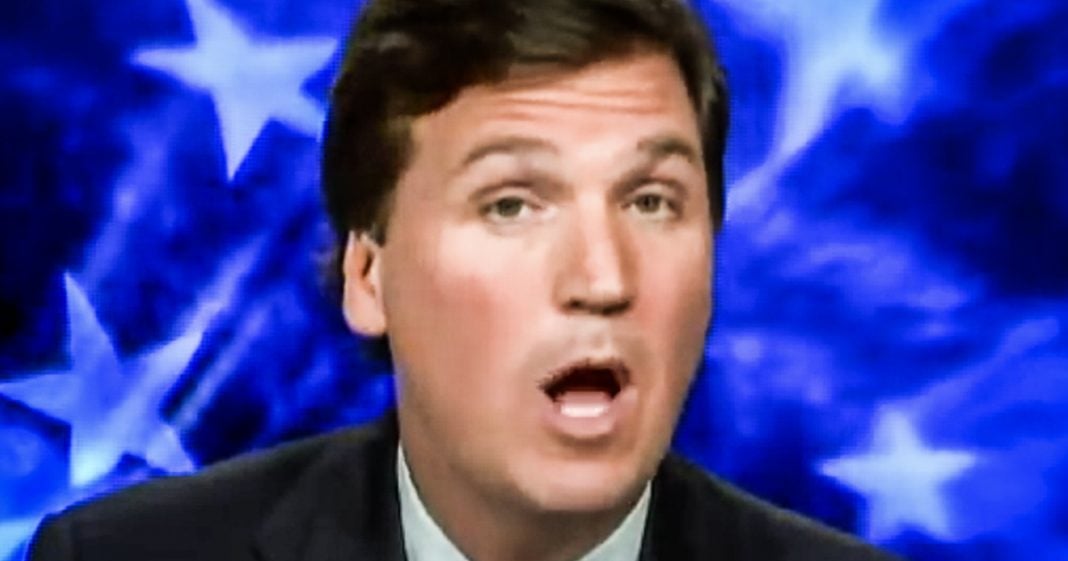 Fox News host Tucker Carlson completely lost his mind during an interview on Tuesday evening while he was debating a Congressional candidate on the issue of gun control. He began screaming and shouting and almost threatening the candidate because Tucker couldn’t wrap his head around the facts. Ring of Fire’s Farron Cousins discusses this.

On Tuesday evening, Fox News host Tucker Carlson hosted Pat Davis, a retired police officer who’s running for Congress in the state of New Mexico as a Democrat and his ad that he has running right now is F the NRA.

He wants to take a stand against this organization that wants to weaken gun laws across the United States because he wants a more common sense gun policy, as do the majority of people in the United States, including the majority of NRA members! He’s running this add; he’s getting great response, and Tucker Carlson wanted to bring him on the program to talk about that ad.

And as usual, things didn’t go the way that Tucker Carlson wanted. Take a look, because Tucker Carlson had a complete meltdown at the end of this interview. Here it is.

Tucker Carlson: Oh. And so-

Tucker Carlson: So if you could fired, it is physically possible to fire … it’s not. I mean, these are rhetorical questions. You don’t know what you’re talking about. And I know that you were a police officer. You claim to have been-

Tucker Carlson: No AR-15 can fire 150 rounds in 15 seconds. That’s untrue, and if you believe it is true, then you’re not qualified to have a conversation about guns. People are laughing at you, because you are ignorant.

Pat Davis: And yet, we take the news.

Tucker Carlson: People are laughing at you because you don’t know what you’re talking about. No, no, that’s just untrue.

Pat Davis: We take exactly the word of the police officers in Las Vegas, who I trust, who ran into that room to save people down below. And found the weapons-

Pat Davis: And found the weapons that were modified with bump stocks that would allow him to do that.

Tucker Carlson: So they say an AR-15 can shoot … what do you think would happen to the barrel in 15 seconds, if you put 150 rounds? It would melt.

Pat Davis: Tucker, I know they get hot. I’ve been through this. But here’s-

Tucker Carlson: So I guess my point is, if you’re gonna take on the NRA, be Mr. Tough I Was a Cop guy, maybe you should know what you’re talking about. But you don’t. You’re putting something on television that’s demonstrably wrong. That’s physically impossible and all of your voters are like, “Oh yeah! This guy knows what he’s talking about! He was a cop.”

Tucker Carlson: But you don’t know. So maybe you should apologize for it.

Pat Davis: -on the NRA, when no one else is doing.

Tucker Carlson: I’m just trying to … oh, okay. I think you should apologize for saying something that’s factually untrue.

Pat Davis: Apologies and politeness have not changed the conversation. We need new folks to take over in House. This will be a real priority.

Tucker Carlson: But you don’t know what you’re talking about, so maybe you shouldn’t be in a position to make decisions because you don’t understand the issue, because you just told me with a straight face that an AR-15 can fire 150 rounds in 15 seconds. Ooh, surprise, it can’t.

So maybe you should admit that and move on to something you understand. Would you do that?

Pat Davis: Tucker, we’re not … this is exactly the type of arguments that don’t get us where we need to be. We need new leaders in Congress.

Tucker Carlson: Oh, it’s not like F the NRA!

Pat Davis: That’s what people are getting behind.

Tucker Carlson: That’s the kind of argument we need.

Pat Davis: We … politeness is not working so far. If you woke up one day and don’t have your kid anymore-

Tucker Carlson: Oh, it’s not? You know what works, actually facts work. Why don’t you get some facts?

Pat Davis: You want somebody in Congress to step up.

Tucker Carlson: Why don’t you get some facts? Oh, Pat. Do you like this mode of communication we have?

Pat Davis: It’d be great to have a conversation.

Tucker Carlson: All right, tough guy. Learn something about guns and get back to me.

Pat Davis: And when the NRA’s-

Tucker Carlson: Interview over, because you don’t know what you’re talking about.

All right. Okay, all right, here’s the thing. Let’s assume that for one second that Tucker Carlson was actually correct. Even though he wasn’t. This is what Republicans like to do when you try to talk about gun control.

They like to divert based on your language, like you call an AR-15 an assault rifle, that’s the only thing they want to talk about is why you’re wrong about that terminology and not about the fact that it’s being used to murder children all over the country.

They just want to know that you know that it’s not actually an assault rifle. They want to focus on the language used. And furthermore, Carlson is wrong. No, the barrel would not melt.

It would get very, very, very hot, but it wouldn’t melt, and yes, that’s what bump stocks do! That’s why there’s this big thing about wanting to ban them, you moron.

And furthermore, sense when do you care about facts? And the truth? If you’re getting pissed off at a guy who you claim is allegedly lying, then I suggest you go back and re-watch every single program that you’ve ever done, dating back to your days at MSNBC before you were even completely a right-wing nut job where you sometimes would tell the truth, but not all the times.

And then you can go back and criticize yourself for lying to the American public for about 15 years at this point, Tucker. You are one of the most dishonest people on TV today. And you have the audacity to freak out on this Congressional candidate, this retired cop, calling him a tough guy?

What, are you gonna fight him? Because I would love to see that, personally. If you want to go get in the street with Pat Davis and see who comes out on top, I would pay very good money to watch that happen because I don’t think you would stand chance. You like, so many other conservatives, you sit in your little cushy studio, multi-million dollar studios with your multi-million dollar salaries, with your private drivers, your private security, and you have the audacity to act like you’re the toughest guy out there.

You wouldn’t last five seconds if somebody decided to come up to you and actually start a real physical fistfight just to see who the real tough guy was, so stop sitting in your comfortable little chair, acting like you’re the biggest, baddest dude on the block.

You’re a whiny little conservative baby who wouldn’t know a fact if it slapped him in the face. As are too many of these other conservatives out there. This guy, Pat Davis, just wanted to make a point that you, Tucker, seem to care more about him using the F word than you do about the fact that children aren’t safe when they go to school, and that is on the hands of the NRA.