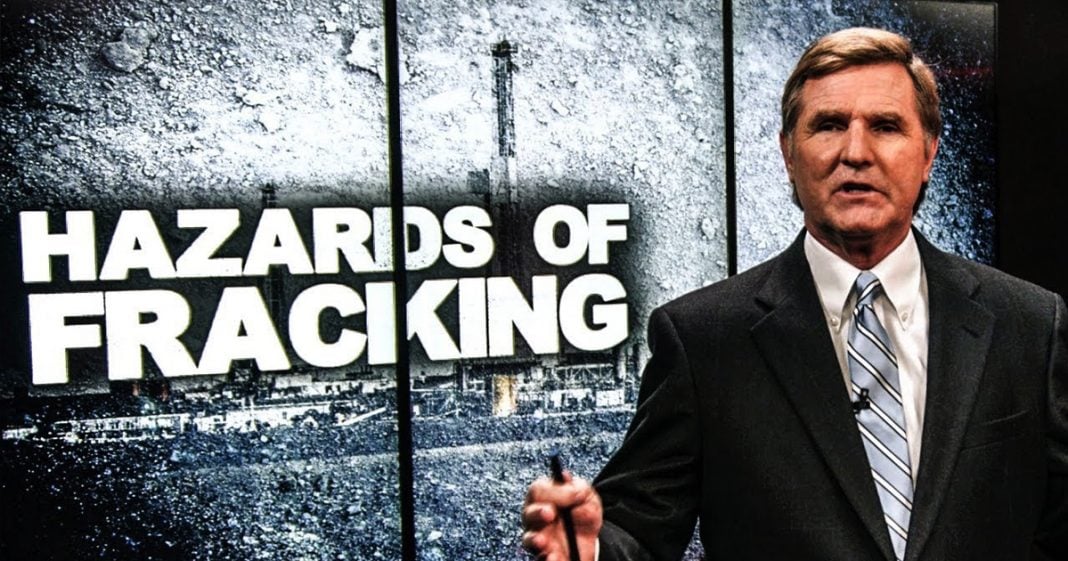 The state of Oklahoma has been home to fracking operations for decades, long before any of the dangers that we now know fracking were brought to light. Thanks to the boom that’s taken place in fracking in the last decade, the state is becoming a fracking train wreck. America’s Lawyer Mike Papantonio discusses this.

CLICK HERE to learn more about the dangers of fracking.

The state of Oklahoma has been home to fracking operations for decades, long before any of the dangers that we know about fracking today were brought to light. And thanks to the boom that has taken place with fracking in the last decade, the state has become ripe for exploitation by the natural gas industry.

One of the biggest problems with the fracking process is that we still to this day don’t know what kinds of chemicals are being pumped into the ground. Traces of diesel fuel, benzene, and countless other dangerous chemicals have been found in fracking wells and wastewater injection wells. But for now, we aren’t allowed to know the full list of chemicals that natural gas companies are pumping into the earth because of something called The Halliburton Rule, which allows companies to keep the list of more than 600 chemicals used in fracking wells a secret from the American public.

While those chemical cocktails are a very real threat to public health, the other danger from fracking is coming in the form of earthquakes. And states like Oklahoma – where fracking has been happening at a fevered pitch – are experiencing an epidemic of earthquakes near fracking wells.

The journal Science reported in July 2014 that a recent spike in seismic activity – known as the Jones swarm – that occurred in Oklahoma between 2008 and 2013 was caused by the increase in wastewater injection from drilling activities like fracking that have been increasing in the state. When the volatile mix of chemicals and water were forcibly pushed into the earth, it created the perfect conditions for earthquakes both large and small to rock parts of the state. These wells were pumping more than 4 million gallons of wastewater back into the earth every month.

But there is a very important distinction to make – the act of fracking itself is not the cause of these earthquakes; It is the injection of the wastewater from fracking that has been linked to the earthquakes. However, these earthquakes did not begin until the fracking boom took place in Oklahoma which dramatically increased the amount of wastewater being pumped back into the earth.

To put it into perspective – in the year 2008, right before the major fracking boom in Oklahoma, there were only 2 earthquakes recorded at a magnitude of 3.0 or greater. Last year there were at least 572.

The link between fracking wastewater wells and earthquakes has been established by several independent studies, but the most important study linking the two was by the U.S. Geological Survey, which concluded that yes, these injection wells are the cause of the spike in earthquakes in Oklahoma.

And the natural gas industry has been well aware of these studies for some time. In fact, they became such a problem for frackers that they actually toyed around with the idea of paying off scientists to publish studies saying that isn’t any link at all between fracking and earthquakes. And a few of those scientists took the bait and actually wrote papers like that. Because they were paid a lot of money.

As these earthquakes occur, they damage property, land and other assets of people who live in these areas, and those damages are now causing massive legal headaches for the industry at last! I hope it continues.