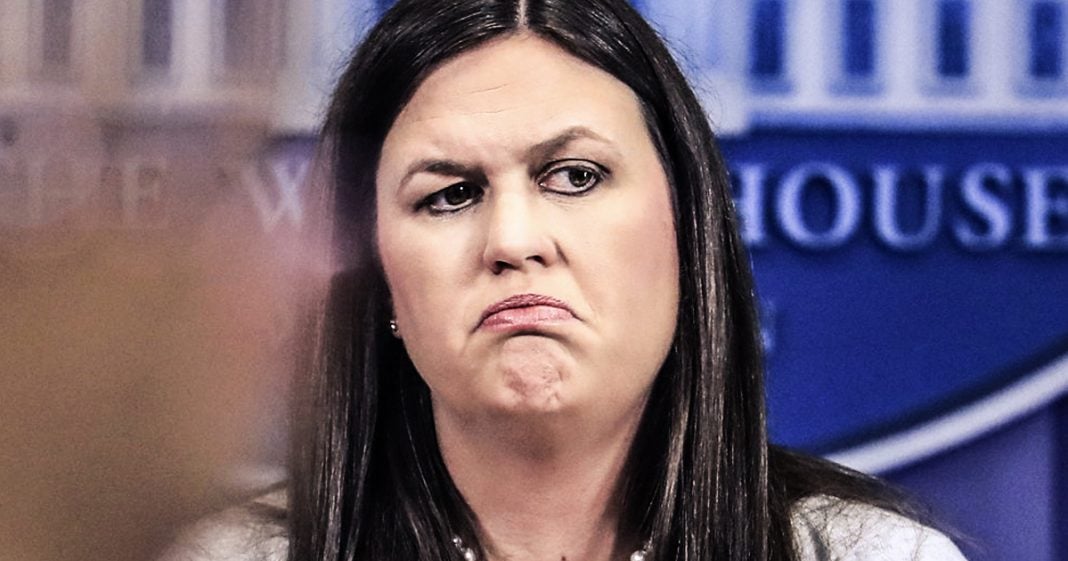 According to White House Press Secretary Sarah Huckabee Sanders, the people who work for her are extremely “selfish” because they continue to leak damning stories about the administration to the press. The staff was forced to sit through an anti-leaking meeting this past week, and the subjects discussed during that meeting were almost immediately leaked to the press. Huckabee Sanders needs to start being more honest with the public if she wants her staff to stop leaking to the press, as Ring of Fire’s Farron Cousins explains.

On Friday, Sarah Huckabee Sanders decided to hold a meeting with her entire staff, to let them know what selfish individuals they truly are. According to the people at the meeting, the meeting was actually about the fact that everybody at that meeting continues to leak things to the press, that people like Sarah Huckabee Sanders and Donald Trump do want leaked to the press. This was an anti-leaking meeting that was immediately leaked to the press after it ended, and yes, according to the people there, Sarah Huckabee Sanders called them selfish for leaking information to the press about what’s going on at the White House behind the scenes, but more importantly what’s going on with the communication’s department because this meeting happened to take place the day that the comment from Kelly Sadler about John McCain not mattering because he’s dying anyway was dominating the news media. Huckabee Sanders was annoyed that something somebody said in the communication’s department made its way out to the media, so she decided to bring everybody in and have her little come to Jesus meeting where she told them that somehow leaking to the press was selfish.

Now I don’t understand that justification there. They’re not doing it to get fame. We don’t know who leaked it, so we don’t know their name, so there’s really no personal benefit to whoever it is who’s leaking the information, but these are things that the American Public is entitled to know. These are not National Security secrets. These are not high classified documents here. These are the horrible things that people in the Trump administration are saying behind closed doors, and when we have a president who acts the way Donald Trump does, we need to know what’s going on with everybody else in that administration. Do they agree with him? Do they share his same horrendous values? Those are things the public needs to understand before they go out and decide to support him or not to support him. But for Huckabee Sanders, that’s too much.

Here’s a little suggestion for you Sarah, if you want your staff to respect you more, to not go out and leak these stories, then it starts with you. First and foremost, you need to make sure that your staff respects you. You don’t do that through fear. You do that by treating them like decent human beings. Second of all, if you don’t want things leaked to the press, then I suggest you go out there to that podium and start telling everyone the truth, so that there’s nothing left for people to want to leak. This all flows from the top, Sarah, and as you’re the top of that department, any leaks in there are reflective of your failure as the White House Press Secretary.