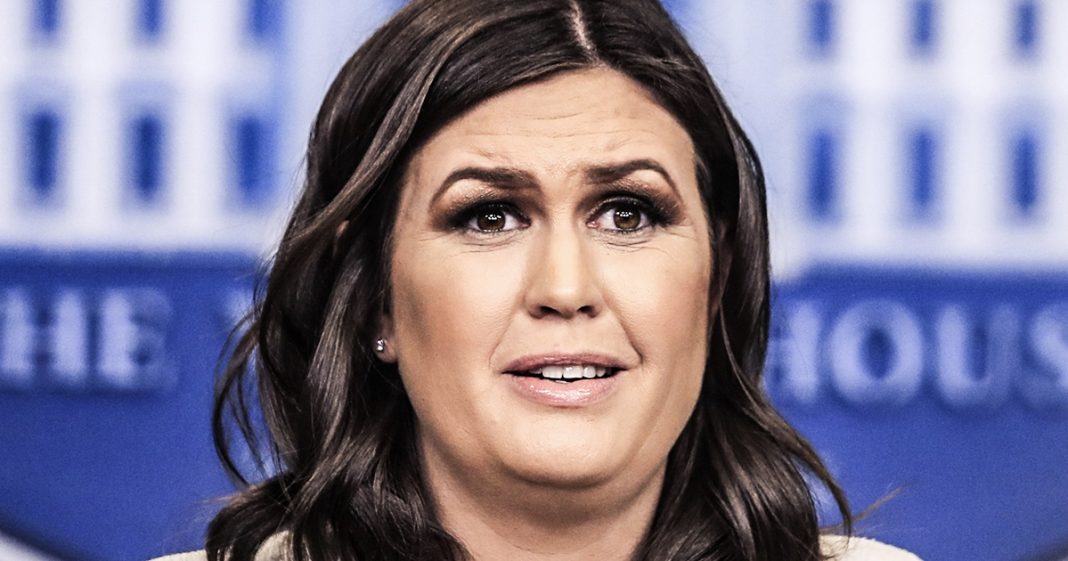 Sarah Huckabee Sanders doesn’t seem to understand the concept of bribe money. During Friday’s press briefing, she told reporters that the bribe money being paid to Trump’s lawyer Michael Cohen for access to Trump is actually proof that the President can’t be bought and that he’s draining the swamp…except for the fact that those who’ve paid for access have gotten everything they wanted. Ring of Fire’s Farron Cousins discusses this.

White House Press Secretary Sarah Huckabee Sanders certainly has a way with words. Now, it’s not a good way with words. She’s not some kind of clever wordsmith. She just has a way to twist logic and state it so plainly that almost anyone could say, “Wow, she certainly knows what she’s talking about even when she’s wrong.” If you don’t understand what I mean, take a look at this clip from last Friday’s White House press briefing, where Huckabee Sanders was asked a question about Michael Cohen’s basic bribe money that he received for access to Donald Trump. Take a look at what she had to say when asked about that money.

Sarah H.S.: I think that this further proves that the president’s not going to be influenced by special interest. This is actually the definition of draining the swamp, something the president talked about repeatedly during the campaign, and for anything beyond that I would direct you to the president’s outside counsel.

Reporter: Explain what this definition of draining the swamp. I mean, this is companies paying for information about the president’s…

Sarah H.S.: I think it’s pretty clear that the Department of Justice opposed the merger, and so certainly the president has not been influenced by any, or his administration, influenced by any outside special interest.

That’s right, the fact that his own lawyer was bribed by these corporations, and then these corporations got to go meet with Donald Trump somehow proves that he can’t be bought. That’s what I’m talking about when I say this woman has a way with words. I mean, that is just such a stretch of basic human logic, and yet, she just throws it out there like, “Yeah, that’s … He can’t be bought, obviously, clearly. Look at that.” No, Sarah. He was literally bought. Michael Cohen was literally bought, and when you say that, yeah, the DOJ doesn’t support the merger of AT&T and Time Warner, that’s not what this is about, because AT&T already got the biggest gift that they could ever want, and that was the destruction of net neutrality.

That’s the main thing they wanted. The Time Warner deal came up long after that, so yes, they did get that. That $600,000 payment to Michael Cohen for access to Donald Trump paid off nicely for them, because they’re going to make a huge profit off of the destruction of net neutrality. Then when you look at a company like Novartis that paid hundreds of thousands of dollars to Cohen as well in order to get an audience with Donald Trump, he just announced that he is not going to work with drug companies to lower prescription drug prices, one of his biggest campaign promises. Not going to happen, so now pharmaceutical companies don’t have to worry about lowering the cost of their drugs, and therefore reducing the amount of profit they take home every year.

Trump is not draining the swamp, and any person who believes that he is, is an absolute idiot that shouldn’t be allowed to speak on the issue of politics in the United States. That’s the truth. Donald Trump has filled this administration with some of the most corrupt people to ever serve in the federal government, and now, every week that passes, we’re learning more and more about the disgusting, and corrupt, and possibly illegal activities that he also engaged in through his lawyer, Michael Cohen. Sarah, there’s going to come a time when you’re not able to spin this crap anymore. You’ve done a decent job so far. I know nobody’s buying it, but at least you’re still willing to get up there on the podium, unlike Sean Spicer, who decided to hide in the bushes, but there’s going to come a day when you’re going to snap. You’re not going to have enough left in you to go out there and lie on behalf of this administration anymore, or, much like this press conference, you’re going to admit that yes, these payments happened, and oops, that’s not what you were supposed to do.

I don’t think you realize that. You were supposed to continue to deny that the president had anything to do with it, but now you went out there and said that yes, these payments happened, yes, these people had an audience with the president as a result of those payments, but it’s not like he gave them any favors, right? Yeah. It doesn’t matter if they got anything in return, because actually they did, but you just confirmed that the president and his lawyer engaged in bribery. Good luck keeping your job through the end of the summer.