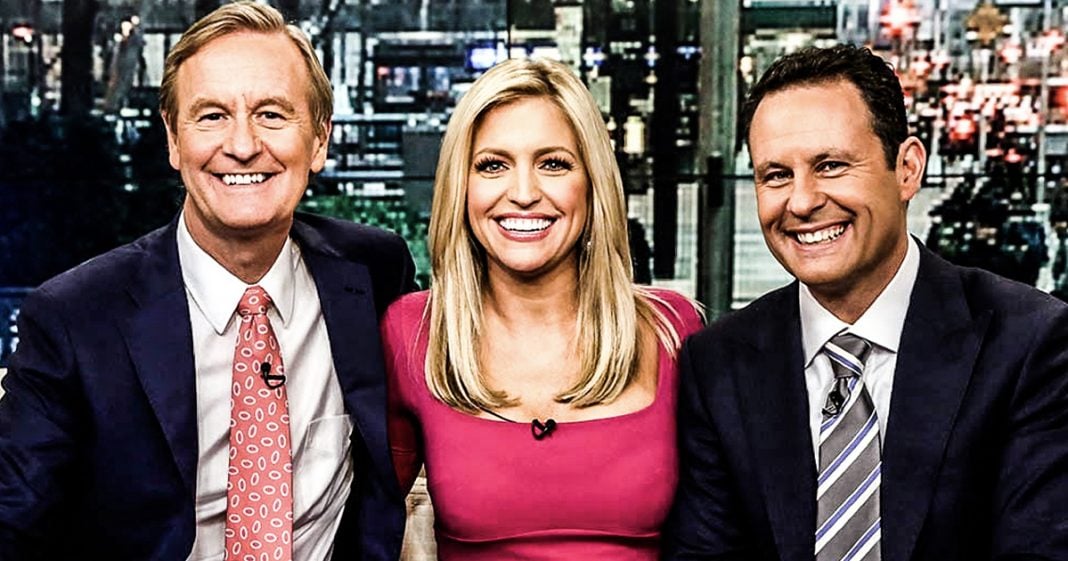 According to a leaked email sent to employees at the FDA, the Trump administration has ordered all FDA offices to permanently put their TVs onto Fox News, and they are forbidden from changing the station. This administration has lost its collective mind, and a strong argument could be made that the relationship between the President and Fox News is a threat to our national security. Ring of Fire’s Farron Cousins discusses this.

CBS News has now confirmed that certain government agencies have been ordered by the Trump administration to turn their TV’s on to Fox News, and to never change the channel. Now, it used to be common that most government offices had TV’s on that were tuned in to CNN, it wasn’t too left, it wasn’t too right, it was kind of right down the middle. So CNN was the one they picked. But that’s not good enough for the trump administration, and for all of his buddies over at Fox News that he’s calling on a nightly basis.

So now, the Trump administration sent an email to an office at the FDA telling them they have to put it on Fox News and leave it on Fox news. Here’s the email, I’m going to read you the entire email here.

Good morning CBER Researchers. The CBER is the center for biologics evaluation and research at the FDA.

Please excuse me for sending this out to your entire group via your list serve, but I was alerted by a member in your group, and I wanted to let everyone know that the reason for the change from CNN to Fox. The reason for the change is that a decision from the current administration, and administrative officials has requested that all monitors under our control on the White Oak campus display Fox News. Sorry for the inconvenience, but I am unable to change any of the monitors to any other news sources at this time.

That is a copy of an official White House email sent to the FDA to let them know that your employees, whether they like it or no, are going to be forced to watch pro Trump, pro Republican propaganda every single day, even though it has no basis in reality, no factual content on any of their programs. This is the way you live, and ladies and gentlemen, this is fascism.

They just told them that they’re not even allowed to change the channel on their televisions. They have to tune in to the pro Trump news network. If that doesn’t terrify you, then one, I’m assuming you’re a Fox News viewer already. But two, then I don’t think you understand the implications of this. These are federal government employees whose salaries are paid from our tax dollars, who are now forced to listen or watch Fox News all day long in the background, as they’re trying to work.

And this is the center for biologics and evaluation in research at the FDA, these are fucking scientists, and they have to watch Fox News while they’re working on approving drugs and evaluating them, that could change the course of human history. Having Sean Hannity flapping in the background, you think that’s going to be conducive to a proper working environment? Because I don’t.

This is disgusting. And it does back to Donald Trump’s incestuous relationship with the people at Fox News, and probably the fact that his son is now dating a Fox News host. This is not acceptable, and anyone who thinks that this is okay, that this is how the federal government should be working, you’re a threat to this country. These people shouldn’t be forced to have the TV on any channel. You want to make it to where they have to leave TV’s on so people who come into the offices have something to watch, put it on the Food Network. Something non partisan, non offensive, who can be offended by food?

Put it on the Travel Channel, anything, weather channel maybe. I don’t know that’s a little too political for folks in the Trump administration, because occasionally they reference climate change. Put it on Sesame Street if you have to. Anything would be more educational than leaving it on Fox News all day. But that is now the environment in which these people at the FDA, and probably coming soon to many other government organizations are now forced to work every single day.