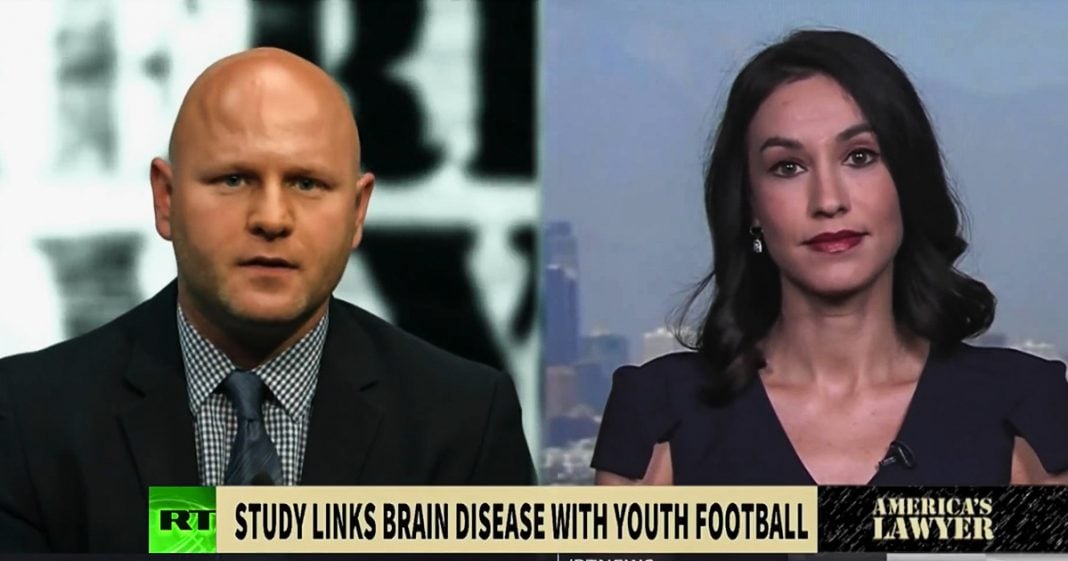 Farron Cousins: A new study reports that kids who play tackle football early in life will probably experience an early onset of degenerative brain disease. The study will likely create more controversy within the NFL, the NCAA, and football fans, as medical studies like this directly challenge the profitability of the sport.

Joining me now to talk about this is RT correspondent, Brigida Santos. Brigida, what did this new study find and who actually performed this study?

Brigida Santos: This study was performed by researchers at Boston University and what they found is that children who played tackle football before the age of 12 are suffering from degenerative brain disorders like chronic traumatic encephalopathy. CTE, of course, has been found in the brains of athletes and this comes in the form of increased deposits of Tau proteins, and those proteins are what destroy the brain. Now, this study was published in the Annals of Neurology and it was carried out by those same researchers who had initially revealed that CTE was found in 99% of all NFL players that they had studied previously.

Farron Cousins: When CTE was first discovered, the NFL did not act on these findings appropriately at all. Can you tell us what the reaction was back then and what do they have to do … What do they have to say, actually, about this new study, if they have anything to say at all?

Brigida Santos: Back then, they had denied for about two decades and even dumped many of their resources into denying the link between brain trauma and concussions. When it comes to this new study, it’s unclear. Now, I know that they have had to pay out $765 million in settlements and they have also since changed some of their rules, imposing penalties and fines on players who initiate head to head contact during games, but they haven’t really said what their position is on these children getting this disorder. And, of course, children are going to get it if they’re engaging in the same activities that cause it in adults.

Farron Cousins: You know, it’s really interesting, actually. A month or two ago, there was an update to that NFL CTE settlement story talking about the fact that the majority of that money has not been paid out. The NFL is not holding up their part of the bargain to make these people whole again after basically lying and covering up the fact that they’ve been destroying their brains and doing nothing about it. Anyway, we do have that point, the NFL did their thing, allegedly, but for kids who are playing this game, they’re under the age of 12, what protocols or warnings are even in place in these leagues that are allowing parents to know about the risks here?

Brigida Santos: It’s unclear. As far as I can tell, there are no standards set across the board for these leagues. Now, I do know that former NFL players have been trying to educate parents and, in fact, they’ve started the Concussion Legacy Foundation, which is a website where parents can go and get information. I know that in at least four states, lawmakers are trying to ban tackle football in schools for children or at least restrict it to children ages 12 and up. It’s unfortunate that there are no standards because the earlier that children play, the earlier they’re going to be exhibiting some of these symptoms of degenerative brain disorders. In fact, on average, I believe it’s about 13 years earlier that they’ll show these signs than adults who play tackle football.

Farron Cousins: What is the NCAA, the college athletics, that’s obviously a huge thing, I live down here in the South, it’s one of the biggest things in the world, but what is their position on any of these medical studies and the findings of CTE, because they’ve been a lot more lax about this than the NFL has.

Brigida Santos: They’re just now starting to face litigation and we do not yet know what their official position is. However, they will likely reveal that position this June when for the first time in Ploetz versus the NCAA, a battle over CTE will be heard in court for the first time. As of now, any cases involving CTE have only been settled. They have yet to go to trial. This will be the first one and that’s when the NCAA is going to reveal its position. We really don’t know yet what it’s going to do, but I imagine it’s going to try to do exactly what the NFL has done and deny those payments to people and do everything it can to pretend this doesn’t exist.

Farron Cousins: The bottom line on all of this is just taking care of these athletes, letting the parents and the players and the professionals and the college athletes, letting them fully understand the risks and then letting them make that informed decision about whether or not that’s a risk they’re willing to take. Is this what they want to do with their future? Do they want to possibly have degenerative brain disease 13 years earlier than should be? It’s all about the choice. When you do not give them the facts, when you do not let them know what’s actually happening, you are taking that choice away from these people, and that is why we have these lawsuits, that is why we had the settlement, because they’re taking away people’s right to make an informed choice.

Brigida Santos, thank you for joining me today.