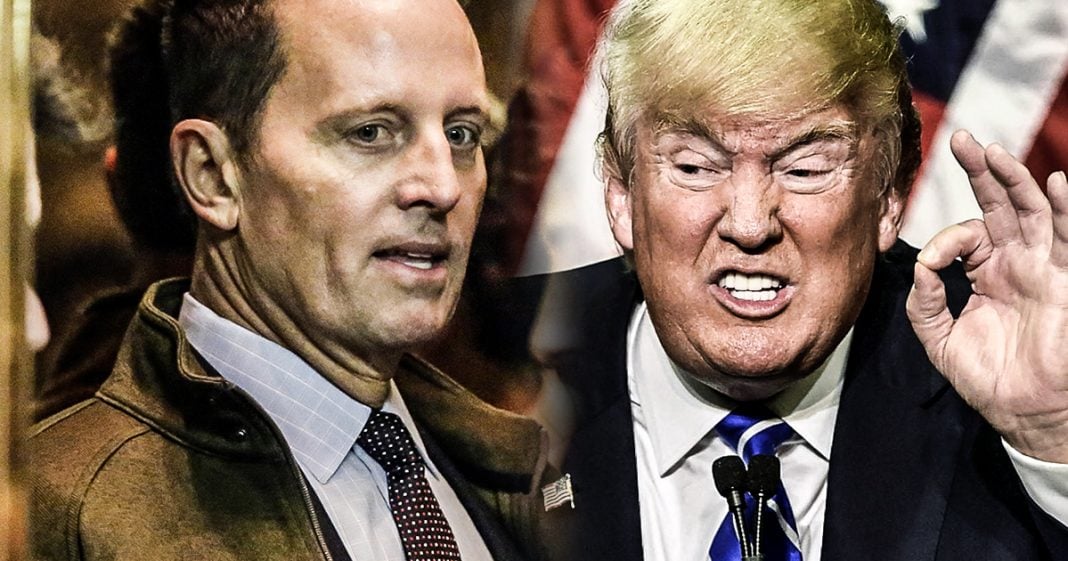 Starting a new job is never easy, and there’s always a period where the new hire makes a few mistakes. But in the case of the Trump administration, those rookie mistakes have major consequences for US foreign policy. Just hours after accepting the position as the new US ambassador to Germany, Richard Grenell sent a tweet that undermined the country that he is in charge of securing relations with. It isn’t easy to offend a whole country with a single tweet just a few hours after getting hired, but the Trump administration still managed to do it, as Ring of Fire’s Farron Cousins explains.

It’s never easy starting a new job. I mean anybody who’s ever had to go and start a new job in the United States, you probably make a few mistakes in your first couple weeks. You don’t quite know where the coffee machine is. Things are a little rough. But when you’re a member of the Trump administration, it’s even worse, because these aren’t just jobs where it’s, “Oh, I misplaced that spreadsheet. I’ll find it later.” No, these are jobs where you have to go out and represent the United States to the rest of the world. When you screw up, even if it’s your first day, it’s a big deal.

Well, it’s really not, because as it turns out, something that people in the Trump administration don’t seem to understand, the rest of the planet seemed to like the Iran deal that the US just pulled out of. That’s what Grenell’s tweet was in response to. He’s now the ambassador to Germany, so he wanted to let them know, “Hey, we’ve pulled out of this thing, so you need to stop doing business with this country even though you haven’t pulled out of it. You’re keeping your part of the bargain. So is Iran. We’re not, so you shouldn’t.”

Well, obviously the whole country of Germany gets pissed off at this guy, again hours after he took the job, and now we’re alienating yet another ally of the United States because we’re trying to tell them what to do with a guy who was on the job for so short of a time that he probably never even took a bathroom break before he sent the tweet. That’s the kind of level of incompetency and idiocy that we are dealing with with the Trump administration.

You can’t just go around bossing around every other country in the world. We don’t run them. We don’t own them. We don’t owe them anything, and they owe us nothing. That’s how this works. You can’t tell them what to do, especially when you were the ones, Trump administration, that pulled us out of a multinational agreement with the country of Iran. We fucked up. Not them. Not Germany. We did. Well, you did, and Grenell did the same with his tweet. Yet here they are, sitting there acting like they’ve got the moral high ground to tell these other countries what their businesses can or cannot do.

Grenell is lucky that leaders in Germany were able to calm down the business leaders by telling them, “Relax. Don’t listen to him. He’s an idiot,” basically, but that’s what the rest of the world thinks of us now, and it is 100% because of the crap that Donald Trump has pulled and the incompetence that he has brought to the office of the presidency.