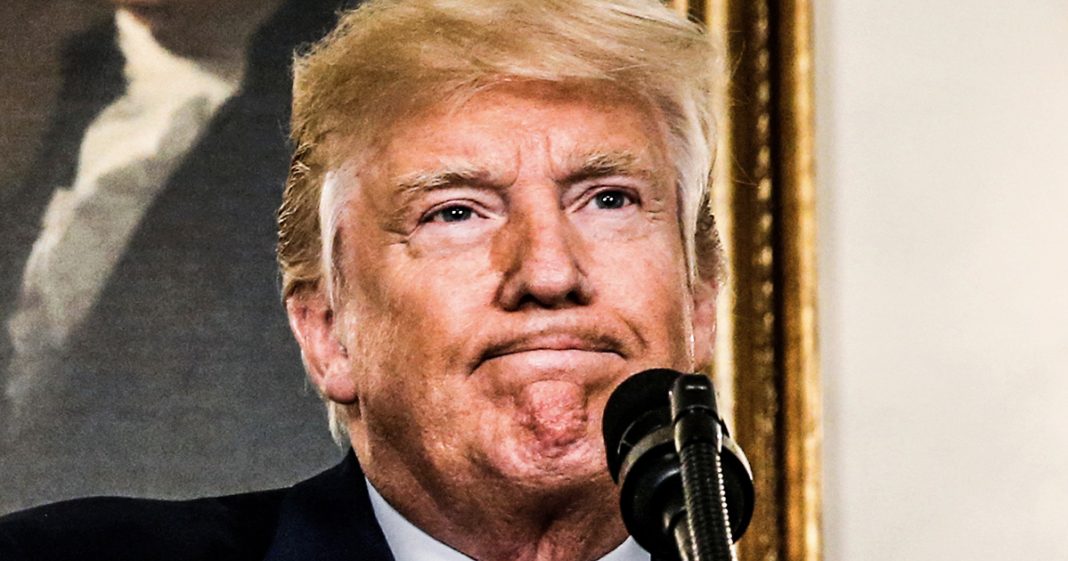 Conservatives bend and twist logic at every possible opportunity in order to serve their master Donald Trump. But why? Nearly everything this man says or does can be exposed as a complete fraud, yet the MAGA crowd continues to believe that he’s the greatest president ever. Ring of Fire’s Farron Cousins explains why Republicans are so willing to be lied to – and why they refuse to accept reality.

Donald Trump is quite possibly the biggest liar that we have ever had as President of the United States, and I say that, at least in my lifetime, because according to fact checkers, Donald Trump lies to the American public at least six and half times every single day. Every day, at least six and a half lies, on average to the American public. He’s a complete fraud. He is an absolute charlatan con man that for some reason has managed to hoodwink so many people on the right in this country. A few examples from this particular week; Donald Trump tweeted out the fact that several Isis leaders had been captured. That was about it to the tweet, it was a very short tweet, unusual for him, and then all of his followers on Twitter started tweeting out their congratulations to him, saying they were so proud to have him as President. He’s doing more for the war on terror than anybody else ever has. He did a great job capturing these people.

Here’s the thing though; the United States didn’t capture them. The United States wasn’t involved in it. It was the Iraqi police forces that actually captured these people, and yet Donald Trump, kind of in a round about way, got on Twitter to take credit for it, because he didn’t say that somebody else did it, so he posed it as if it was the United States or his decision to do this, and his followers bought it up because they’re too stupid to go Google something and find out what actually happened.

Furthermore, two other major things happened this week that showed what a fraud Donald Trump is. First of all, we learned that’s he’s just not going to do an infrastructure bill this year. One of his biggest campaign promises, and something that actually would have been good for this country was he was going to go out there and fix the infrastructure, it’s been crumbling for decades, it needs to be fixed. People are dying because our infrastructure is so crappy in the United States, and he was going to fix it. Not now. No, we spent too much money on those tax cuts, we can’t give you an infrastructure bill.

And do you know what the response was from his supporters online? It’s the Democrats fault. They started lashing out and blaming the Democrats for the fact that we’re not getting an infrastructure bill. “They’re blocking it.” Nobody’s blocking it dumbasses, it’s just not being written or proposed. And then they said, “Well, it’s okay because he’s already done so much in the last 14/15 months that he kinda deserves a break.” A break? The guy has golfed 25% of his presidency, I think he’s had enough of a break.

The other thing that happened was that he announced that he wasn’t going to negotiate drug prices for Medicare, which was his second only major good thing that he had proposed while running for President. He was going to bring down drug prices. Nobody really believed him, other than Republicans, but hey, if he was going to give it a shot, give it a shot. But now he tells us, on the same week we learned that Novartis Pharmaceuticals paid his lawyer $1.2 million for access to him, that he’s just not going to do it. Nope. “No negotiation for Medicare, not going to happen, we’re not going to lower those drug prices, I’ve got to go play golf now, sorry.”

And these morons, and I say morons because you’re morons, still believe him. They still believe he is the best President ever, they tell him that on Twitter. They tell him that they support him wholeheartedly, that they love him, that they’re praying for him. So what the hell is so wrong with the brains of these conservatives, and I know it’s probably not the majority of them, but there’s a good number of them that act like Donald Trump is come kind of savior of the United States when he has not enacted a single policy that would benefit them.

He has not fulfilled a single campaign promise, other than to cut taxes for millionaires and billionaires, which includes himself and many members of congress. He is screwing you people over, and you’re cheering him on while he does it. This isn’t just a Trump problem, this is an American voter problem. Well, more specifically, this is an American Republican Party problem. There is something mentally wrong with that party, and if you need any proof, then go click on any one of Donald Trump’s tweets and read the responses from his followers. That will be more than enough evidence to convince you that every one of these people needs to go seek mental help immediately.