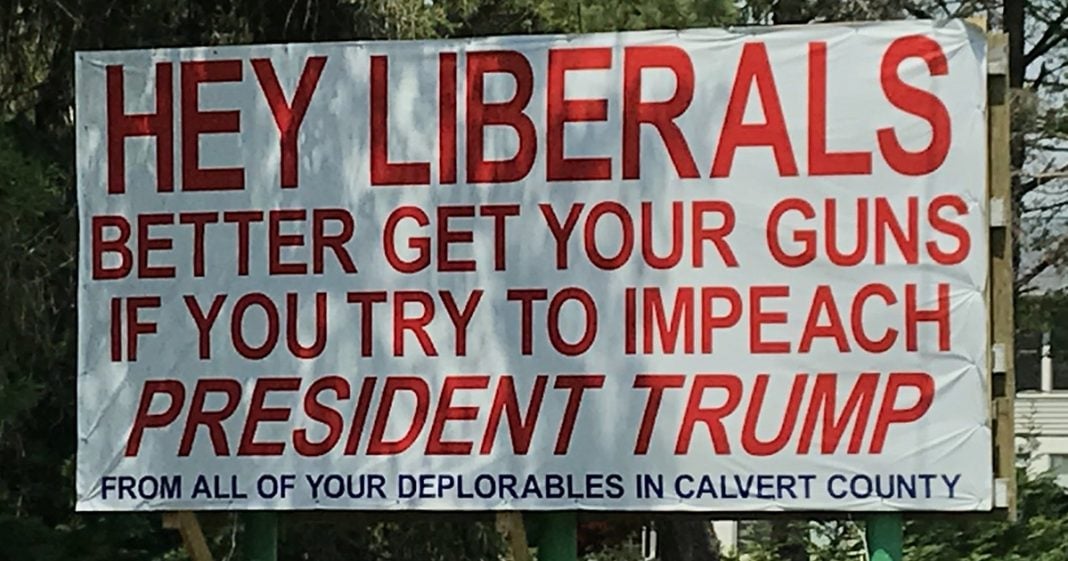 Self-described “deplorables” in the state of Maryland have put up a massive sign, warning liberals that there will be bloodshed if Democrats attempt to impeach Donald Trump. These are sick individuals who claim to be patriots yet continue to let their country fall into fascism so that they can support a political party. Ring of Fire’s Farron Cousins discusses this.

A group of self-described deplorables in the state of Maryland have issued a warning to Democrats in the United States telling them that if they want to impeach Donald Trump, they better be ready to grab their guns and go fight over this impeachment. They’ve put up a billboard these deplorables, as they call themselves, that says this: “Hey Liberals, better get your guns if you try to impeach President Trump. From all of your deplorables in Calvert County”.

Now, this isn’t a billboard that, you know, was paid for. It’s not like they went to the advertising agency and said, “I would like to purchase this billboard”. No, no, no this is a bunch of idiots who got some paint and boards and put it up on the side of the road. Now, people in this area who have to drive past this are terrified. One woman told the local news outlet that it actually scares her children because they’re afraid that they’re going to be physically harmed by these people, threatening armed warfare against the Democratic party if they attempt to impeach Donald Trump.

This is sick and disgusting behavior by seriously disturbed individuals who need to be psychologically evaluated and then properly put away. But here’s the thing, let’s go beyond just the fact that, oh these are a bunch of crazy folks, let’s try to get a little deeper into it, right? Why is it that these so-called patriot deplorables are so beholden to Donald Trump? That’s what I don’t get. Why? And nobody has, as of yet, been able to really explain that. The why. Your life is not any better today than it was three years ago, four years ago under Barack Obama. Literally for these people nothing has changed about their daily lives and yet, they cling to the fact that Obama was a piece of crap and Donald Trump is Jesus Christ. And it makes no sense. These are not the top one percenters who just got a tax cut, if it was that billboard would have looked a hell of a lot better than just a bunch of rednecks with a can of paint.

These people, their lives haven’t changed. They owe nothing to Donald Trump, they owe nothing to Obama and yet, they’re clinging to this, threatening, at this point, I guess, to murderer people if this guy is impeached. Nothing about this makes any sense but this is the kind of America that Donald Trump has created and the Republicans who are complicit with him are fostering this. This is not acceptable and people like this illustrate why we need some kind of restriction on the second amendment at this point. You should not be allowed, legally, to go out there and threaten this kind of thing on a billboard in the middle of an area with no repercussions. Something has to be done here.

But more importantly, when we talk about the rule of law in the United States, why is it that these Republicans get so pissed off when we want to hold Trump accountable if he committed a crime? Right now all we’re trying to do is make sure that investigation plays itself out. If crimes were committed we’ll go from there. If they weren’t, well, sucks for us but we’ll suck it up and deal with it. These Republicans don’t understand that, these deplorables as they call themselves now, as if it’s some kind of badge of honor. These people are sick and twisted individuals who have a cult-like mindset when it comes to Donald Trump and the Republican party. They are not patriots, they do not care about America or American citizens. All they care about is having their cult leader still in the White House.