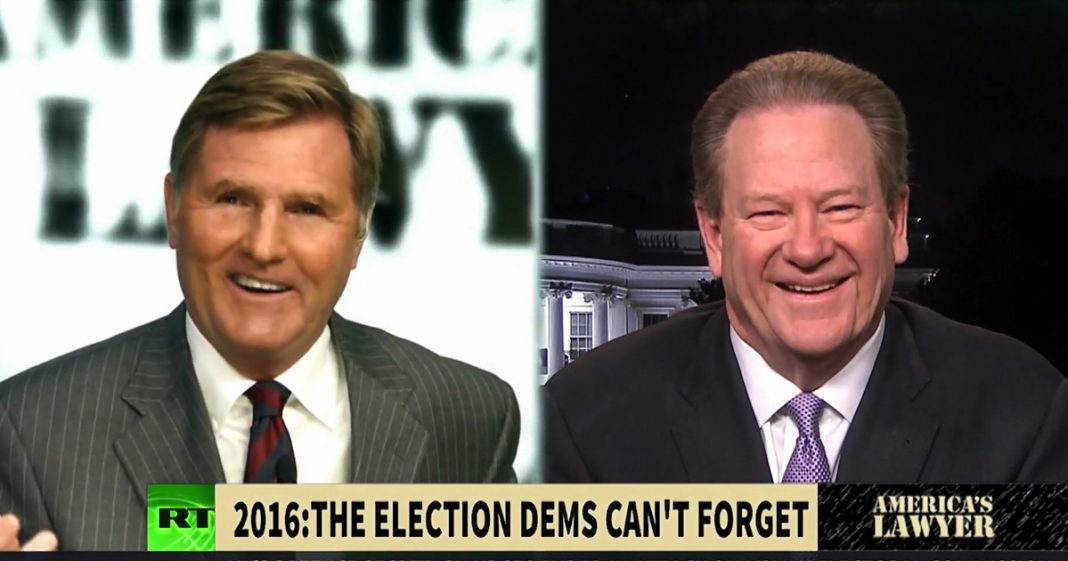 The Democratic Party establishment still can’t seem to get over the fact that Hillary Clinton lost the 2016 Presidential election. But rather than admitting that they put up a bad candidate or that she ran a pathetic campaign, they’ve decided to triple down on their claims that she did nothing wrong. Mike Papantonio is joined by Ed Schultz to discuss this.

Mike Papantonio: Ever since the 2016 presidential election officially called Donald Trump the winner, the democratic party’s been going through a list of different excuses as to why Hillary Clinton lost. They blamed everyone and everything including Bernie Sanders, Jill Stein, Susan Sarandon, the Russians, Wikileaks, James Comey, the weather, but never once have the party leads admitted to themselves that maybe they just ran a lousy campaign and maybe John Podesta and Robby Mook did what they typically do. They lost.

Now here we are nearly 18 months after that election and the DNC refuses to move on. The democratic party has decided that their best course of action is not to look at themselves and figure out where they screwed up, but to continue with these wild goose chases about who it is to blame for Hillary’s loss.

They’ve now filed a lawsuit against the Trump campaign, Russia, and Wikileaks alleging that a conspiracy to steal the 2016 election took place that prevented Hillary from winning. You have to wonder if that alleged conspiracy involved preventing Hillary maybe from visiting vital states like Wisconsin, or maybe it involved having her bash Trump instead of talking about important issues. Perhaps it involved these groups coming together to convince Hillary that she should hold private dinners, private dinners, with Wall Street bankers instead of talking to the average voter on the street, or maybe she still doesn’t understand that a few of the personality traits that plague her are very hard to hide.

The premise of the lawsuit is razor thin and it’ll be surprising if a judge even allows this to move forward, but one thing is for certain. It’s highly unlikely that the DNC is going to come out of this fight with a victory. They might actually cause harm to the party as they go forward.

Joining me to talk about this is Ed Schultz, the host of The News with Ed Schultz and RT America. Ed, tell us, what are the grounds for this lawsuit? I’ve looked at it. I’ve taken as close a look as I can. From a legal standpoint, you talk about razor thin. It’s almost nonexistent. From a political standpoint, what’s your take?

Ed Schultz: Well, Mike, good to be with you. It’s nice to have an opportunity to give some opinion on this outside of The News and I appreciate the opportunity very much. This is nothing more than the democratic party going down a political rat hole chasing Hillary Clinton’s dreams. This is nothing but swamp-building. This isn’t swamp-draining.

The timing of this lawsuit is highly suspect. If the DNC felt this all along, why didn’t they file a lawsuit right after the election? Where’s their evidence? The House Intelligence Committee just this past Friday said that, “Well, there was no collusion.” This is a fundraiser is what it is.

Believe it or not, there’s still people around the country who think that Hillary got shafted and that they can give a lot of money and they need money. They’re way behind in their fundraising, and they’re thinking that if there is any kind of force left with the Clintons, it’s probably just money. It’s not political weight in Washington. The timing of this is suspect. It’s politically motivated. It’s also connected to money. It’s not going to go anywhere, and it’s a sad day for the democrats.

I want to point out that there are opportunities out there for the democrats right now to really establish what they believe in and they’re not taking advantage of that from what I can see and this lawsuit is just taking them down a political rat hole.

Mike Papantonio: Well, I’ve got tell you something. I handle some of the biggest lawsuits in the country, everything from tobacco to virtually every pharmaceutical misdeed, Wall Street misdeeds. The chances of this proceeding and getting any meaningful result is zero. I can’t overstate it. It’s zero, unless they get a judge that says, “Well, let’s take a look. I’m not going to dismiss it. Let’s move to summary judgment.”

Here’s the problem, though, Ed. What they’ve done is they’ve opened themselves up to depositions. You see, for example, when a slander case takes place, it’s great if you want to find out and you want to take depositions against that person who sued you. Can you imagine? I wish somebody would hire me to take the depositions in this case. It’s going to be extraordinary what we find about the DNC.

What are the chances that the suit is going to hold up from a political standpoint? At some point, there’s going to be pushback. Some of the people involved here are going to say, “Let’s talk about issues. Let’s go back to the old days when we talked about issues.” What’s your take on that?

Ed Schultz: Well, the democratic party in this lawsuit, they allege collusion. They are saying that there was a coordinated effort between the Trump campaign, the Russians, and Wikileaks. Well, if that’s the case, then they would have to get way out in front of the Mueller investigation, number one. They would have their grounds for proving it.

The key word here is collusion. You would have to get a jury that would be all democratic supporters and Hillary Clinton backers and a judge to allow this to go forward that would be heavily democratic and throw the hate merchant talk about Donald Trump into the mix, as well.

If I were a defense attorney and I was going to defend any of these entities, the first thing I’d do would be bringing in Al Franken, Amy Klobuchar, maybe Sheldon Whitehouse and Bernie Sanders, and I would depose them. I’d ask Bernie Sanders, say, “How did the DNC treat you? Were you ever fed any questions at debates the way Hillary Clinton was? Was there any collusion from your perspective on that?” I think that would sway the jury.

I would also ask the three senators that I mentioned, “How did your constituents vote? Because to my recollection, it was Bernie Sanders who won Rhode Island. It was Bernie Sanders who won Minnesota, yet you three senators are super delegates. You went to the convention and went against your constituents. What was the shakedown from the Clinton people to your campaign to make you think that you could go against your constituents, yet you’re claiming there was no collusion and you’re claiming that democracy is under attack when you yourself participated in a system that didn’t represent the people.” I think it would be case closed right there. They just don’t have any merits on any of this, Mike.

Mike Papantonio: Well, the problem is, be careful what you ask for because you might get it. I got to tell you, there is within what I do for a living, there’s something called an attack depo. All it is is when you are attacked, the best defense is to go ahead and attack on your own terms, your own narrative.

If I’m Comey or if I’m Clapper or of I’m Debbie Wasserman-Schultz or if I’m Franken, if I’m these people that understood exactly what was up with this move to cause as much harm to Bernie Sanders as they possibly could. Knowing what the facts are, I would be very concerned about this lawsuit because if they get an aggressive lawyer on the other side, if the republican will just finally just hire a lawyer that’s worth a darn and go after them on this.

See, I have the advantage. I’m not democrat and I’m not republican. I’ve been independent for 35 years, but as I watch this and as I weigh the sides, I’m saying this is a bad move politically, especially moving into the midterms. It’s not going to raise enough money for them, Ed. This is not going to raise money for them. All it does is further alienates the people who already think that the DNC is cuckoo. That’s what’s on the street. They think the DNC and the liberal edge of the party, the Wall Street edge of the party, excuse me, that the Wall Street edge of that party has gone completely nuts.

Ed Schultz: Well, cuckoo is a good word, but also the fact that they’re just politically disfocused. This does not focus the democratic party on their basic values and what they’re trying to advocate for workers. The opportunity that I was talking about earlier with you was look at these teachers, Mike, all over the country, in West Virginia, in Arizona, in Texas. They’re walking out of classrooms.

Where’s Chuck Schumer? Where’s Nancy Pelosi? Where’s the democratic party out in front of these teachers saying, “Yes, we’re for public education. We’re for every kid in America getting a fair shake”? That’s a basic democratic value. That is going to excite a lot of people and get people out to vote. This is a fundraiser. This lawsuit isn’t going to motivate one person to go to the polls or make them feel that the democratic leadership is really in their camp and supporting them in any way, shape, or form.

I’ll tell you where they’re missing another opportunity, Mike, is healthcare. Healthcare is coming back around again if the republican hang onto the house and the senate. Trump isn’t going anywhere, okay? Who knows, he may get reelected, but the fact of the matter is these midterms weigh a lot on people in this country dealing with healthcare and the democrats better get out in front of it. Doing lawsuits like this isn’t going to motivate one single voter.

Mike Papantonio: Ed, the real problem is, we’ve got about 20 seconds left. The real problem comes down to this. It is that part of the party has been charmed into believing this nonsense about Russia was true. There probably was some hacking that went on. Was it coordinated in some type of RICO kind of conspiracy? Absolutely not.

At some point, you have got to have people using their brain again rather than drinking the DNC Kool-Aid. It’s important that the democrats pull it together because it’s important that they rebuild their party. You’ve got to have the balance in this country between democrats and republicans, so I’m pulling for the democrats, but I’m just telling you this. It ain’t going to happen in midterms, and part of it is the Pelosi problem, the Schumer problem, the Hillary Clinton problem. Somebody needs to tell Hillary, “Jump on your broom and get out of here because you’re hurting the party.” Thanks for joining me Ed, okay?

Ed Schultz: Good to be with you, Mike. Thank you.