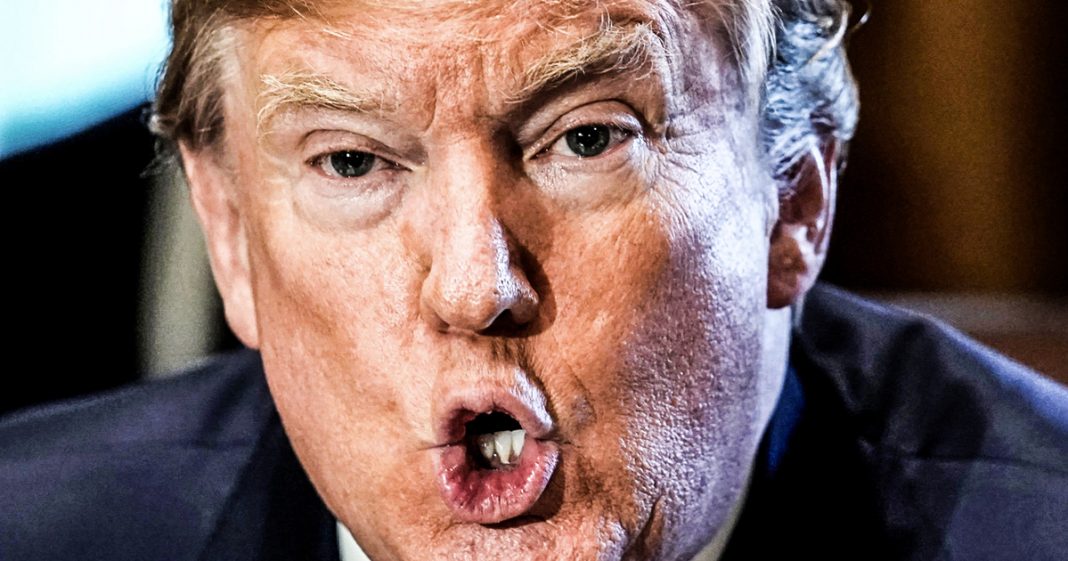 During a rally in Indiana this week, Donald Trump made a comment about extending his presidency beyond the Constitutionally-allowed two terms. This is the second time Trump has publicly said that he may stay in office longer than 8 years, suggesting that he isn’t really joking about the matter. And although he’s trashing the Constitution, the crowd of MAGA fools just cheered and cheered. Ring of Fire’s Farron Cousins discusses this.

This week Donald Trump decided to give a rally in Indiana. Not exactly sure why he needed to do a rally. He’s not exactly running for president in 2020 again yet, but he does like to hear people clap for him so that’s probably why he went there. And during this rally he mentioned that he possibly could serve as president of the United States for more than two terms. And when he suggested that, that crowd went absolutely wild.

Now according to reports and if you watched the video you’ll see, he kind of walked it back after that. He was like, “Yeah, the press would never have that. Actually they would love it because I’m great for their ratings, and if I wasn’t here they’d have nothing to talk about,” as if the political press didn’t exist before Donald Trump came around. We went through eight years of Obama. I think we could easily find stuff to talk about if you weren’t in office there Mr. Trump.

But nonetheless his statement that he might end up serving more than two terms as president is absolutely terrifying, and so is the reaction of the crowd, but first let’s start with Trump himself. The reason it’s terrifying is because this is not the first time he has suggested that. This is the second time at least publicly that Donald Trump has made mention of the fact that maybe he’s going to serve more than eight years as president of the United States. Even though constitutionally he’s only allowed to serve two terms.

You’d make the joke one time, it’s forgettable. You start saying it more than that though and it becomes a pattern. And when you see that crowd reacting like that, it shows that these people do not give a shit about the United States’ constitution. Because at the end of the day that’s what this is about. These people who go out there and say, “You can’t tread on the second amendment. That’s our constitutional right.” Really? Because you don’t seem to care that the president has repeatedly suggested violating the United States’ constitution so that he can be crowned king for life.

Oh and speaking of crowns, how about that moron Dan Bongino from NRA TV and he’s also a Fox News contributor I believe or at least he’s on there enough, did a segment yesterday where he mentioned that if democrats win back the house in this year’s mid-terms, they’re going to impeach Trump, and so now is the time to protect the crown. Those were his words, protect the crown. And that little statement there by Bongino, a guy who’s blocked me on Twitter even though this is the first time I’ve ever mentioned his name and I’ve never tweeted at him, that’s the kind of snowflake he is though, he admitted everything right there, and this Indiana crowd confirmed it with their wild applause.

They want Donald Trump to be king of the United States. They want him to be president for life. Why? I haven’t figured that out yet. But there is something that these psychotic cult-like people in this country have bought into with Donald Trump, and they would not hesitate to vote for him for a third or fourth term. And that is why it is so important that he be impeached or otherwise removed from office before he can finish this first term.