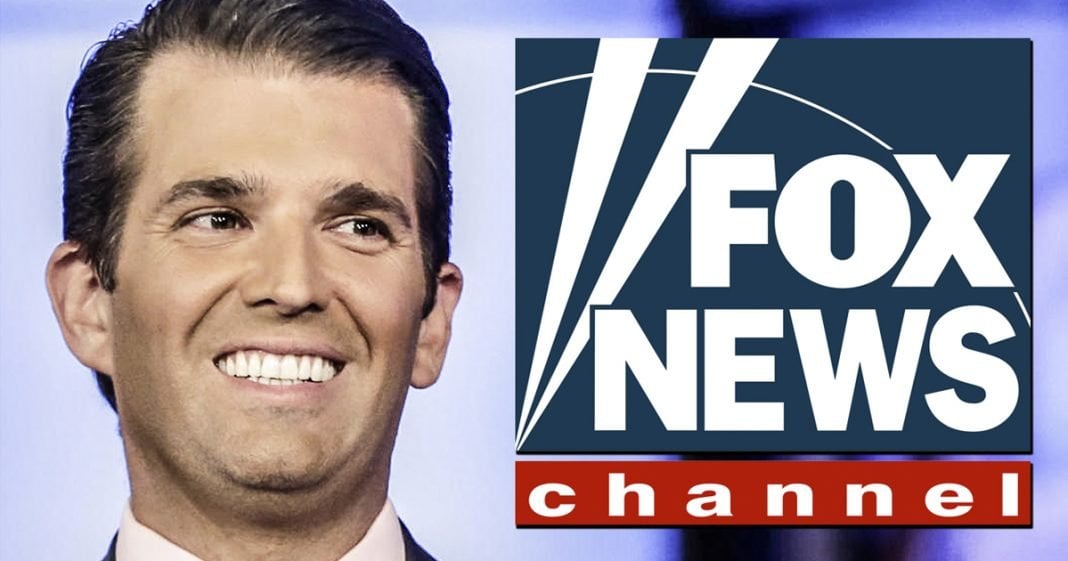 Now that news has broken that Donald Trump, Jr. is dating Fox News host Kimberly Guilfoyle, it is safe to say that the network is, quite literally, in bed with the Trump administration. This presents a huge conflict of interest for Guilfoyle, who has continued to serve as a loyal Trump apologist on the network. Ring of Fire’s Farron Cousins explains why this relationship is even more toxic than you think.

The Trump family is now officially in bed with Fox News. According to reports Donald Trump Jr., who has not yet quite finalized his divorce from wife Vanessa. Is reportedly dating Fox News host, Kimberly Guilfoyle, the host of The Five, on Fox News. And so, therefore, we’ve finally made that leap, from just being great, good buddies, with the Trump family, the Trump administration and Fox News. To now, possibly having them, literally sleeping together.

Here is why this is a problem. Obviously, Guilfoyle has been an ardent Donald Trump supporter on Fox News. Posing as just you know, an outside observer looking in, and I like everything I see. Well now, it turns out that maybe she was trying to get a piece of Trump family pie. Maybe a piece of the Trump family son. Who knows? And if she wants to date him, that’s fine. I actually don’t care about that whatsoever. Her dating life, none of my concern.

What is my concern is the major conflict of interest, that this creates both for Guilfoyle and Fox News as a whole. How can you have a network, that at least sometimes pretends to be objective, talking about a President, when a member of your staff is dating the dudes’ son? That doesn’t exactly work out. If Guilfoyle actually wants to continue this relationship and have it be meaningful and maybe whatever in the future. Fine. But, you have to leave the network. You have to leave the media. Because nobody can trust you to be an objective reporter, when you’re sitting there dating the President’s son. That’s not how this works.

But, let’s be honest. Fox News isn’t going to care about that. Hell, they probably love it! It’s going to be great for ratings. People are going to tune in to find out who the hell this woman is. Because most of us didn’t even know she existed till this story came out. Trump Jr. can feed her all the positive information that he wants. Even though it’s untrue, about his father’s administration. She’ll go on the air, report it as if it’s fact and the idiot Fox News viewers are going to believe it regardless.

And that’s how this whole thing comes full circle. Donald Trump dining with Sean Hannity, being good buddies with Lou Dobbs, calling him up during policy meetings. And now the President’s son, dating a Fox News host. Fox News is running this country right now. And if that doesn’t scare you then you haven’t been paying enough attention.