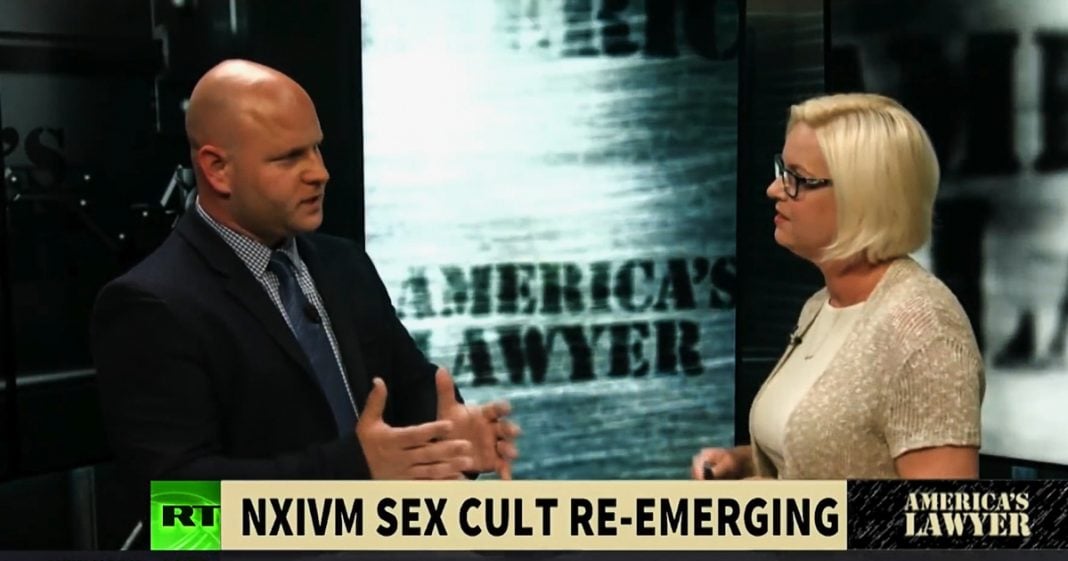 Via America’s Lawyer: Farron Cousins is joined by Mollye Barrows to discuss the NXIVM sex cult and allegations that they are covertly recruiting new members.

Farron Cousins: A notorious sex cult was found trying to covertly recruit new members within the Brooklyn arts and hipster crowd. Authorities believe the cult was steadily imploding after it’s founder was arrested in Mexico for sex trafficking. But these new reports have many among law enforcement alarmed. So joining me now to talk about this is Mollye Barrows, legal journalist for the Trial Lawyer Magazine. Mollye, what is this group all about? I mean, this hipster recruiting sex cult in New York. I mean, what is going on?

Mollye Barrows: Well, it’s interesting. This particular organization, and it’s a series of acronyms, but basically it’s pronounced “Nexium,” it’s N-X-I-V-M. It’s been around for about 20 years, founded in the Albany, New York area by a native of New York, a guy named Keith Raniere, 57 years old. Arrested in Mexico in March for human trafficking, sex trafficking and forced labor in Mexico where there’s another brand of this NXIVM.

So in a nut shell, it’s like a marketing organization, they apply the same set of sort of manipulative cult like principles, if you will, according to former members, to all sorts of different personal and career development type curriculums. Whether it’s for your physical fitness or maybe for women empowerment, but it’s an all women only sort of organization. And women recruit each other.

But once you’re in, apparently that’s when it goes to hell in a handbag. That you’re being branded, that there’s being blackmailed, you’re being brainwashed essentially. And it’s the systematic way of chipping away at their self-esteem. They think they’re signing up for one thing, and then slowly over time they start to whittle away at them, and you’re asked to do more and more bizarre things, including, if you want to get deeper and deeper into the organization, handing over material about yourself that’s potentially damning. Whether it’s nude photos, or financial information that they can use to hold over you.

Farron Cousins: So this to me sounds kind of like it’s a cult/pyramid scheme/Ponzi scheme to go out there and, you know, we’ve recruited you, we’re going to do all these horrible things to you. But now you have to go out and get more people. Is that kind of the way it goes?

Mollye Barrows: Yes, and then of course they have their own terminology within the organization, and much of it’s centered around a slave and master type relationship if you will. And so, again, it’s been around for 20 years, but last fall, both 20:20, ABC’s 20:20, and the New York Times spoke to quite a few former members. And I think it was coming on the heels of the Me Too movement, right around that time, it was more the focus of look what these women endured. Yes, they chose to be in this organization, but it was almost like a frog in a pot of water, they kept turning up the temperature slowly, and by the time it got really bad they were stepping back going I never intended for it to get this bad.

And so with this guy being under arrest, what’s interesting is this 35 year old actress, Allison Mack, who was on Smallville. I guess she played a friend of Superman’s on the show. She also was tied up with this fellow Raniere, was also arrested in Mexico … or was also arrested in connection with the sex trafficking, where, by the way he’s accused of raping girls as young as 12, imprisoning a year for a year and a half, forcing one to run into a tree and drink from a puddle.

So it’s a lot of demoralizing, demeaning activities that they put these women through, aside from taking their money. There’s different branch ways that they coerced these women into getting involved.

Farron Cousins: You know it’s interesting you brought up the Smallville actress, I actually read about that yesterday just in a separate piece about the fact that she was involved in helping to recruit. And as you had briefly mentioned earlier, the fact that they would brand some of those women, they would take the hot iron and they would put a brand on them to show that ownership, like you do with cattle.

Farron Cousins: And essentially that’s what these women become.

So, what happened? Now that this guy’s arrested, is this thing still there? Is there a re-emergence? Are they still recruiting? What do we know about what’s going on post arrest of the leader I guess?

Mollye Barrows: Right. Well why these criminal charges are being pursued and it’s moving pretty quickly in court with Raniere and the actress Mack, in the meantime it looks as though current members are still continuing to try to recruit. There were reports that in the Brooklyn area some folks that … They didn’t want to be named, but they talked to the press and they were prominent area artists and writers. They were invited to what they thought was going to be a discussion group of like minded individuals, very loose language that basically said hey we’re going to talk about improving humanity, and what more we can contribute. And you’re artistic and high minded.

And they get there, and they’re being offered $10,000 … Here, you can sign up for this self-improvement curriculum as an artist, specifically for actors and artists for the low, low price of $10,000. And once you’re involved there’s this additional ways that they try to, as we’ve already talked about, whether it’s the blackmail, the branding, it just steadily worsens as they get deeper and deeper into it.

Well, plenty of folks recognized at this party what was really happening, so they backed off and tell the press, hey just when you thought this was going away, people are still trying to keep it alive. Which is bizarre, why anyone would want to put themselves through it, but I’m sure a lot of it is to do with money.

Mollye Barrows: Alright, thank you Farron, we’ll stay on top of it.