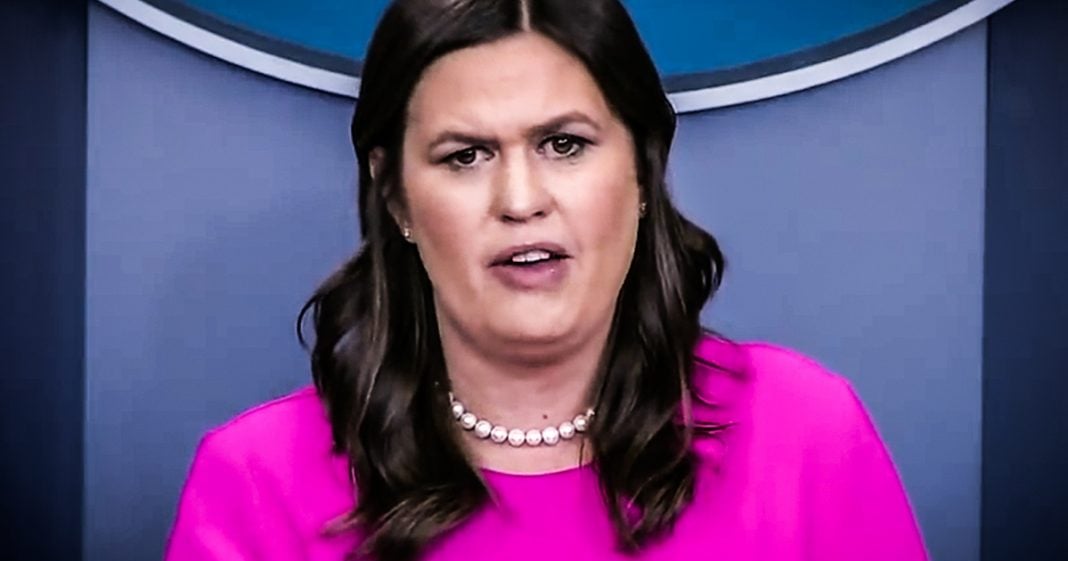 Sarah Huckabee Sanders was asked quite a few questions about Michael Cohen during the Wednesday White House press briefing, and she wasn’t prepared to answer any of them. She stammered, stumbled, and lied her way through the exchanges with reporters, never really giving a clear answer to anything. But she had to have known that these questions were coming, so why not prepare a little better? Ring of Fire’s Farron Cousins discusses this.

During the Wednesday White House Press Briefing, obviously, everybody in that room wanted to know about those payments to Michael Cohen, and what the President thought of it, was he involved in it, what was the whole scenario there? So Sarah Huckabee Sanders, who had a good 18 hours to prep for this. I mean, she had to have known this was coming, couldn’t even give a plausible answer. And instead, seemed more confused and irate than ever before. Take a look.

Speaker 2:
Let me ask you this question, Sarah. The confidential financial records of Michael Cohen’s company, Essential Consultants, were made public, promoting the Treasury Department’s Office of the Inspector General to launch an investigation as to how that happened.

But among the records were payments from AT&T to a person very close to the President, at a time when AT&T was looking for government approval of a proposed merger with Time Warner. There were also payments of over a million dollars from Novartis Pharmaceuticals, at a time that the President was talking about doing something to bring down the cost of pharmaceuticals. Is the President concerned about any aspect of what we’ve learned in the last 24 hours?

Sarah H. S.:
As you know, due to the complications of the different components of this investigation, I would refer you to the President’s Outside Special, or Outside Council to address those concerns.

Speaker 2:
Is the President concerned that major corporations were giving money to somebody very close to him, at a time when they had business before the Federal Government?

Sarah H. S.:
I haven’t heard the President express any specific concerns about that. Steve.

Steve:
Sarah, do you believe that Michael Cohen was ever in any way qualified to provide insights into this administration?

Sarah H. S.:
I’m not going to get into somebody else’s qualifications. That’s something that an independent company that hires an individual would have to make that determination. Not me.

Steve:
Let me ask you this, because what we know is that Michael Cohen received millions of dollars, apparently peddling the insights that he said he could provide into this administration, to America’s largest corporations. Is the President in any way embarrassed or ashamed of that? Because it seems to be the definition of swampy behavior-

Here’s the thing about that clip that really gets me. That’s not like Sarah Huckabee Sanders. She was genuinely caught off guard with her constant stammering, the stumbling between words, saying the wrong name for the prosecutor and all that. She’s not typically like that. She does get angry, she does get flustered sometimes, but she doesn’t ever really stumble that much. Something’s going on. And I think she’s finally at the point where her lies are no longer good enough.

As much as everybody got up in arms about Michelle Wolf’s White House Correspondents Dinner Roast of Sarah Huckabee Sanders that lasted a good five seconds, it actually opened a lot of peoples’ eyes. And it got into Huckabee Sanders’ head, knowing that people aren’t buying into it anymore. She seems to be falling apart at this point. And to be honest, there’s only so much you can say about this issue anyway.

I’m sure Huckabee Sanders does not have all the answers, because as we’ve seen multiple times in the past week, nobody in that White House tells her anything. So yeah, she probably doesn’t know what Trump knows about it, or if he was involved. But she could just say that instead of saying, “Well, maybe the special prosecutor … Oh, excuse me. Special, the council, whoever maybe talked to this dude over here. There’s a guy in the back, maybe he knows. I don’t know.”

Just be honest, Sarah. Just say, “Look. I understand you guys have a lot of questions about this. I wish I had the answers. But trust me, I don’t.” That’s all you have to do. Just try being honest for one day, and if you like it, maybe make that a thing you do from now on.