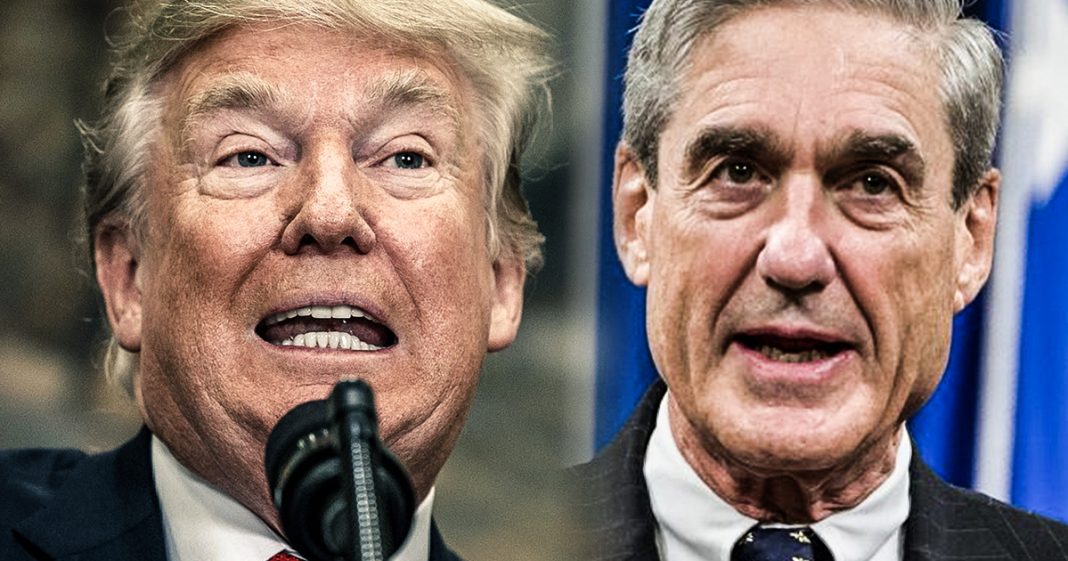 While many on the right claim that the lack of “progress” from the Mueller investigation shows that it needs to be shut down, the truth is that Mueller and his team know far more than anyone even realizes. After it was revealed that Michael Cohen received payments from companies like AT&T and Novartis, AT&T actually came forward and admitted that they had already told Mueller’s team about that payment in November of 2017 – a full six months before the public knew. This is likely why Trump is freaking out right now, because he understands that Mueller and his team know more than the rest of the country, and that’s bad news for this administration. Ring of Fire’s Farron Cousins discusses this.

One of my favorite arguments from Conservatives right now is seeing them on Twitter, or online, or even giving interviews, saying that there’s been absolutely no evidence brought forward from this Mueller investigation and therefore it needs to end because it’s a total witch hunt, as Donald Trump likes to say. Well the truth is, and people need to really understand this and think about it, the reason we’re not seeing all kinds of things flying out of this Mueller investigation is because that’s not how investigations work. Take, for example, earlier this week when we learned that AT&T, Novartis, and a couple other companies were paying hundreds of thousands, and in some case, millions of dollars, to Donald Trump’s attorney, Michael Cohen, through shell companies in order to gain access to the president of the United States. We learned about that stuff on Tuesday evening, May 2018.

Do you know when Robert Mueller knew about that? At least as early as November 2017, because as AT&T reported on Wednesday, they already handed all of that information over about their payments to Cohen to Robert Mueller in November and December of 2017. Had this story not broken this week because of Michael Avenatti, Stormy Daniels’ lawyer, we wouldn’t have known that Robert Mueller, the special prosecutor, and his office had this information or that they were pursuing it in any way. He’s already interviewed Viktor Vekselberg, the Russian oligarch, who gave $400,000 to Michael Cohen. He knew about this stuff long before anybody else did, so the next time you hear a Republican tell you that this investigation hasn’t given us anything, just say, “You’re absolutely right, because that’s not how investigations work. They don’t just leak information. They don’t hold a press conference every single time they get a piece of evidence against somebody in this administration. It’s all going to be in the final report, and hopefully, in the final indictments.”

Robert Mueller and his team are 10 steps ahead of the president of the United States right now, and that’s likely why Donald Trump is freaking out. We have seen him this week on Twitter freaking out about this investigation more so than usual, talking about the witch hunt, talking about no collusion, trying to distract people, telling us the news is fake all about all this stuff, even though it’s been confirmed by literally everyone involved in it. Trump has nowhere to go. He has nowhere to hide, and he’s only got a few days left before the deadline hits for him to give Robert Mueller an answer as to whether or not he’s going to testify in person, or if Mueller’s going to have to go and get a subpoena and force him to testify in front of the Grand Jury.

There’s no positive outcome for Donald Trump on this anymore. All of these threads that Mueller has found, the information that he has that we don’t even know that he has, they all point back to Trump. We got his lawyer. You know, we’ve got his kids involved. We got his son-in-law involved. We’ve got other members of his campaign, his closest confidants. You can’t tell me that all of those people surrounding Trump were involved, but the dude at the center didn’t know anything about it. That’s a kind of deniability that I’m just not going to buy into, because that would make absolutely zero sense. Mueller knows what he’s doing. The team knows what they’re doing, and even if he fires Mueller, which would create a Constitutional crisis, it’s not going to put an end to this investigation. As I said, there is no good outcome for this anymore with regards to Donald Trump, and I think at this point, based on his freakouts, even he is starting to understand that.