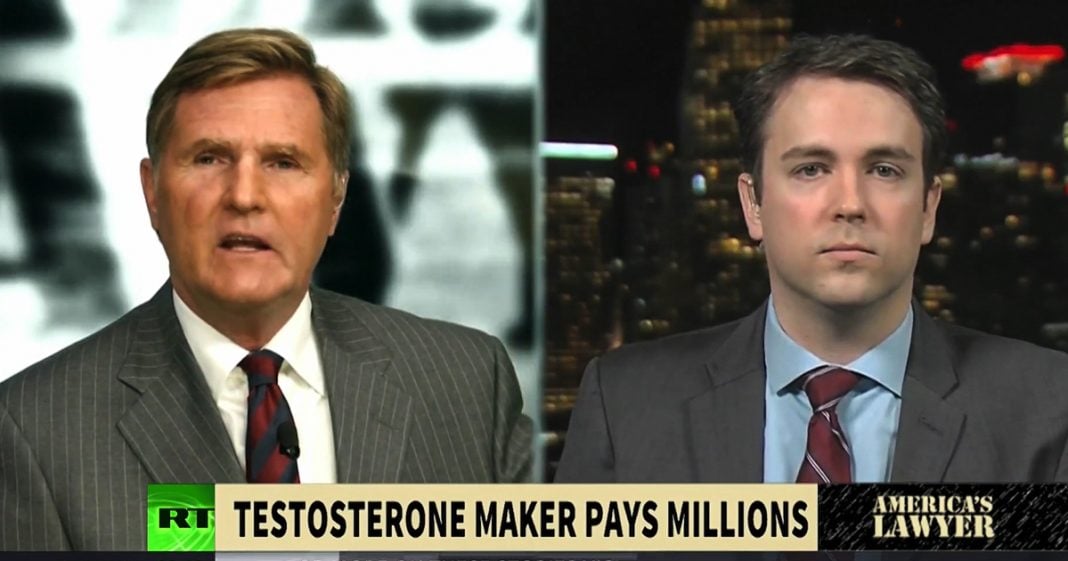 Via America’s Lawyer: Mike Papantonio and Attorney Wesley Bowden talk about $3 million case over the deceptive marketing of Testosterone drugs like Androgel.

Mike Papantonio: A federal jury’s ordering AbbVie to pay $3 million to a man who nearly died after using their famous testosterone enhancer, AndroGel. The man’s lawsuit is one among a thousand that claimed using testosterone drugs caused either strokes or heart attacks. The lawsuits also say the drug company deceptively marketed to men, knowing about the dangers.

Joining me to talk about this is attorney Wes Bowden, who tried the last case against AbbVie. Wes, what do we know about this case and why did the jury come to this verdict? Let me preface it. The last time you went to trial with them, a jury came back with $150 million for you. Now, that case was retried, part of it was taken away. Now you came back consistently another $3 million. What’s your take on what the jury’s reacting to here? Why are they so mad?

Wes Bowden: Well, we tried a few of these cases now. What we’re seeing is that these jurors get just absolutely angry, they’re upset when they see the deceptive marketing practices this company employed over the last 15 years. This company didn’t have anyone looking over their shoulder telling them to stop or forcing them to stop, and when they didn’t have anyone holding up a stop sign, they just ran and they started promising men benefits which they had never proven and they were increasing the risk for everyone to have heart attacks.

Wes Bowden: There are. There’s a lot of different testosterone manufacturers, there’s 7,000 cases throughout the country. 3,500 of them are against AbbVie, and that’s who we’ve been trying our cases against. They’re the market leader. They’ve got 70% of the market prior to the label change in 2015. You know, I think what it really boils down to is that their attorneys are telling them that this isn’t a case, and I would love to be in the board room when they sit back down and say, “Look, the first trial which was $150 million, that was a fluke, don’t worry about it. The second trial was $140 million, that was a fluke,” that had to be a really tough sell.

Now they’ve come back again for a third time and have rendered a multimillion dollar award against a company for a product which they had been consistently for the last decade and a half telling people poses no risk and have said that, “Look, our playbook of having going out there and convince doctors to sign up to prescribe this medication, it was all above board.” You know Pap, there have been two findings of fraud in this case. Fraud, not just negligence, but fraud.

Mike Papantonio: What are the frauds? Tell me what the frauds are.

Wes Bowden: Yeah, what they found here was that this company went out there and they made statements they knew to be false, they knew to be misleading, all in an effort to get men to take this drug. Who they made it to wasn’t just people directly, and I’ll tell you a little bit about their marketing campaign to people, to people like you and I where we watch it on TV, but they also went after their doctors. They had this plan that they developed prior to this drug ever coming on the market, they executed it brilliantly. I mean, this company has really written the playbook. I mean, they could teach tobacco a thing or two with just how great their marketing was.

Mike Papantonio: Well, so what they did, I mean, if I got it right, first of all they phonied up some of the material.

Mike Papantonio: Then after they phonied up some of the clinical data they then told people that, “We’ve done all these studies and if you take this testosterone drug you’re going to live longer, you’re going to be more vital, life is going to be good.” Tell us more about the fraud. That’s what I want to hear. What happened in the fraud? Give me some details.

Wes Bowden: Yeah so, what they did, you’re exactly right. They went out and they hired doctors, they called them key opinion leaders. They phonied up the science and they set them out in front of CBS, in front of FOX News, a lot of other stations out there to give the company’s message that this drug was going to lead people to have more energy, it was going to fix their sexual dysfunction, it was going to improve their mood. They had done studies internally and they couldn’t show any of this. In fact, what they did …

Wes Bowden: Their studies showed a lot of risk, I mean, real risk in terms of increasing plaque in arteries, increasing the rate of heart attacks, increasing clots, really bad things. What they didn’t show as they’re showing this increased risk, they didn’t show that people were getting a benefit. They might show a little bit of a benefit here in terms of energy, but a lot of people went down in energy on this. It showed nothing more than simply a placebo effect.

What they did was they took this information and they tried to get it published. When they went to these journals, these prestigious journals to get it published, the journals rejected it. They didn’t just reject it and say, “Come back when you get more information.” They said, “Your science is so bad, this is junk science. Don’t even try to resubmit it to us.” They did that a couple of times and finally they would find some of these lower tier scientific journals to get it published in, and they ran with that to a doctor and said, “Look what we can do for your patients.” It was all false.

Mike Papantonio: Well now, people have died because of this, if I get it right. I mean, you’ve actually had people die because of an overdose.

Mike Papantonio: What I understand, and correct me if I’m wrong with this, but AndroGel, for example, it’s a gel that you apply dermal application and your body’s supposed to absorb that, and part of the problem was that people would use the same areas to apply it, it would build up, the intake into the human body became so high that it would cause heart attacks or strokes. The company, AbbVie had every reason to know that. Give me the details around that. Is that kind of how the problem surfaces for a person who uses AndroGel?

Wes Bowden: Well, yeah. What happens is, is that testosterone, it’s nothing new. It’s been around since the ’50s. People have been injecting it typically, historically. All this company did was they took an old product, they turned it into a gel that you could rub on your shoulders, kind of like a deodorant stick, and what would happen is it would raise the testosterone level in your body. Now, they have done studies now, studies that they have funded that came out as recently as last year that show that as your testosterone level increases, so does your risk. What they found was that men, after a year of being on this drug had additional plaques in their arteries.