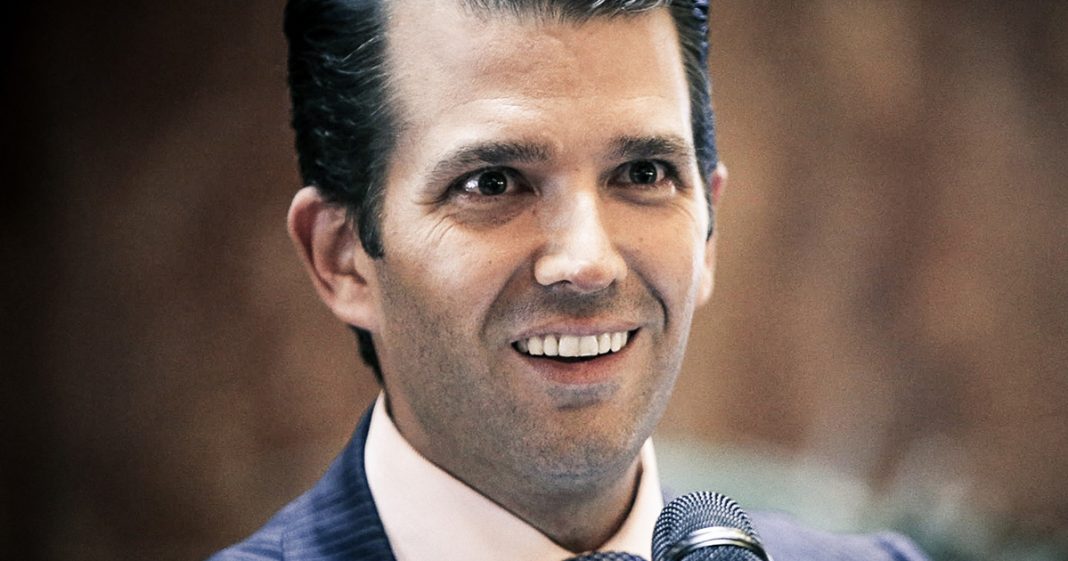 Donald Trump, Jr. is certainly ambitious, and his latest project appears to be one that is almost doomed from the start. Trump Jr. believes that he can travel the country and help the Republican Party not just retain control of the House and Senate this year, but actually INCREASE their numbers in the midterm elections. Junior may want to realize that his presence isn’t going to save the GOP, nor will it save his father from all of the bad news coming down the pipeline. Ring of Fire’s Farron Cousins discusses this.

Perhaps in an effort to prove that he is not the most incompetent of the Trump children, Donald Trump Jr. has announced that he is going to take a more active role in the 2018 midterms. According to sources within the White House Trump Jr’s been making phone calls and offering to go out and basically campaign and be seen with certain GOP candidates who may be in a bit of trouble in their years’ midterms. Targeting a few specific states, West Virginia is one where Donald Trump Jr. believes his presence can help defeat corporate democrat Joe Manchin. He’s also going to go to Missouri, Montana, Indiana, some of the mid west states, maybe show people that hey look, I’m just an average guy just like you. Here’s the thing that I don’t think Donald Trump Jr. quite understands at this point or actually will ever understand to be honest with you. Americans for the most part are not a big fan of the Trump family. Now, I know there’s still some ardent die hard Donald Trump supporters out there but as for the rest of them they could do without him. Donald Trump Jr’s presence is not going to help anything for Republicans who are already struggling.

As we’ve seen in recent reports, Republicans do not want Donald Trump himself going out there making the rounds and campaigning for people because as we’ve seen through all the special elections in the last year and a half, hasn’t really worked out all that great for them. Republicans understand that one of their biggest issues this year that they have to overcome is the presence of the Trump name itself. So, if Trump Jr. wants to go out there and start speaking on behalf of these Republican candidates I say let him. Not just because it’s going to backfire. But I say let him because people need to understand what the Republican party has become. A bunch of wealthy people who don’t give a damn about the less fortunate, who were born with silver spoons in their mouth yet believe that they’ve built their own wealth themselves even though everything in life has been handed to them. They won’t follow through with any of the promises that they make out there on the campaign. That is the Trump’s in a nutshell. That is what the Republican party today has morphed into.