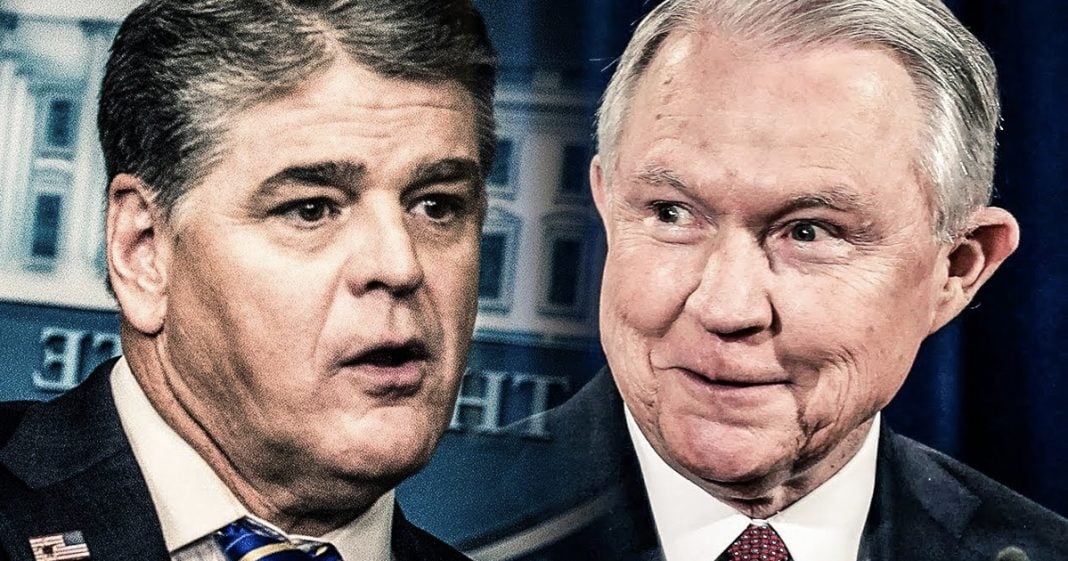 Sean Hannity has decided that he’s not even going to pretend to be sane anymore, and he recently suggested that the reason the DOJ is not handing over classified documents to known-leaker Devin Nunes is because Jeff Sessions is part of The Deep State so he could be acting as a double agent against the Trump administration. Hannity has completely lost whatever small amount of sanity he may have previously had, as Ring of Fire’s Farron Cousins explains.

FOX News host Sean Hannity has decided that it’s no longer worthwhile to even pretend that he is a sane human being. A few days ago, Sean Hannity actually accused or suggested that Jeff Sessions, Attorney General of the United States, hardcore Republican appointed by a Republican, always been a good loyal little Republican, Hannity accused Sessions of possibly being part of the so-called deep state. Here’s what he said.

Well, first a little back story, actually, before we get into the quote here. Sean Hannity is pissed off because Devin Nunes, the guy who has been leaking all this information to the Trump administration from Congress, wants to get his hands on some documents from the DOJ about the investigations into Donald Trump. Well, the DOJ says, “Hey, we can’t do that because this is a national security issue, and if we give it to you and you leak it like you usually do, because we don’t trust you, people could die.” That’s not good enough for Nunes. That’s not good enough for Hannity. In fact, the White House actually sided with the DOJ on not turning these documents over for what it’s worth, so did the FBI and the Director of National Intelligence.

Anyway, everybody agrees that if the DOJ turns these documents over it’s going to result in bloodshed. Somewhere, it’s going to hurt our alliances with other countries. It’s a bad thing. Sean Hannity’s pissed off on behalf of Devin Nunes, so he says, “Mr. Attorney General, I say this with all respect. Where is your urgency? You need to do your job. This has gone on way too long. These are legitimate, important requests. You are not impervious nor the DOJ impervious to the rule of law in our federal system.”

Well, hold up there Hannity, because the rule of law, I’m pretty sure that’s what the DOJ is supposed to be upholding. Right? If the people that are in charge of the law say that we can’t give you this because it contains classified national security information, I think I’m going to side with them, even if that means siding with a scumbag like Jeff Sessions. He goes on. He requested whether Sessions and Rosenstein are, “Part of the swamp,” referencing President Donald Trump’s drain the swamp campaign pledge. “Are you part of the deep state,” he asked. That was a direct quote, “Are you part of the deep state?”

There it is. Sean Hannity has now gone full blown Alex Jones conspiracy theorist thinking that Jeff Sessions, the guy that Donald Trump appointed to run the DOJ, the guy who served as a very loyal Republican stooge in the Senate for all those years, now he’s part of the deep state. What’s interesting to me about this, again, is that Sean Hannity and FOX News and all of these other Republicans, they at least used to just, you know, seem like a counter to regular news. You know? They would say things that weren’t necessarily true, but they never went into the realm of full blown conspiracy theorists. Well, now they have. There’s no turning back.

FOX News is Info Wars. FOX News is Daily Caller and Breitbart and Daily Wire and all of those other fly by night republican conspiracy sites that seem to be popping up every other day. They don’t care about actual reporting. They don’t care about facts. At this point, they don’t even care about reality. When Sean Hannity suggests that Trump’s hand-picked guy Jeff Sessions is part of the deep state, you know that something has gone wrong in Hannity’s brain and in the brains of every single executive at FOX News. They need to pull him into their office and say, “Hey, I understand you’re buddies with Trump. We get it. Could you not be an instance piece of crap on behalf of our network anymore, because it’s destroying what little credibility we may have had?”

Of course, they’re not going to do that. Hannity’s a cash cow. He brings in the ratings. He brings in the advertising dollars. They’re going to let him go out there, continue destroying the little bit of credibility FOX News may have had, which I don’t even know if they had any, all because he wants to protect Donald Trump from the mounting horrible evidence coming out against him at this point, on a near daily basis.