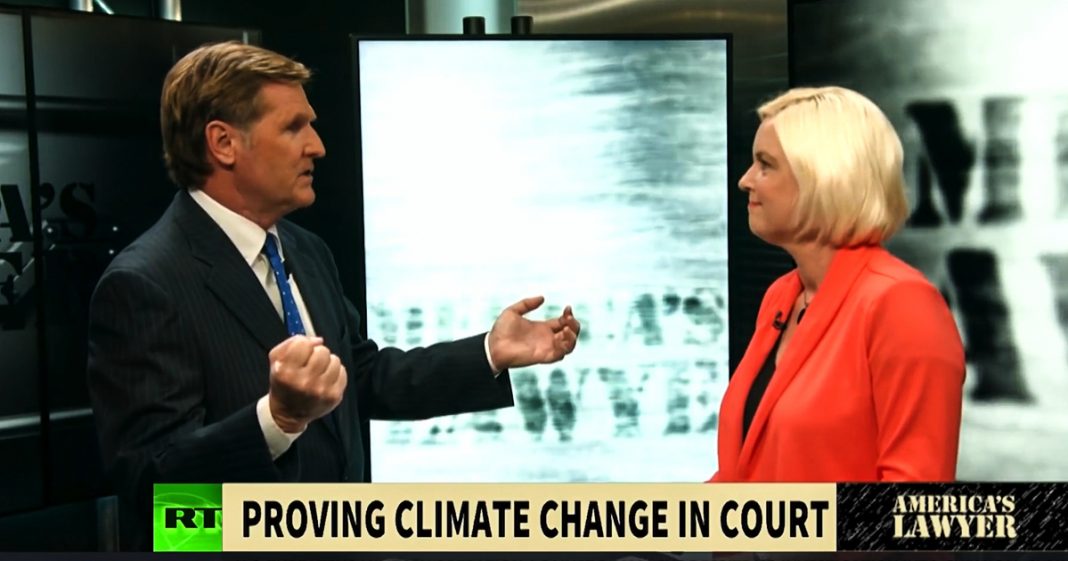 Via America’s Lawyer: Mike Papantonio and Mollye Barrows explain why a Judge is ordering oil companies to present evidence that shows why they argue they are not causing climate change.

Mike Papantonio: A California judge presiding over two climate change lawsuits is ordering the plaintiffs and the defendants to present the latest scientific evidence on global warming to him in court. The lawsuit says the five largest oil companies in the world are playing down the effects of fossil fuels and the effect that they have on the climate and they’re doing that to protect their profits and this judge is demanding that we take a closer look at all this.

Joining now to talk about this is Mollye Barrows. She’s a legal journalist for Trial Lawyer Magazine. We’ve seen this before, haven’t we, Mollye?

Mollye Barrows: I know that you just can’t believe that these cities would make these claims, San Francisco and Oakland. They’re accusing these kind, gentle oil companies of downplaying this evidence. This is a case that was made for you, Pap. Do you have a little bit of trial envy? Would you like to be up there in the midst of this?

Mike Papantonio: Can you imagine being the person that gets to present seventy years of information that shows us they knew it was coming and they covered it up?

Mollye Barrows: It’s like I’ve been waiting for you to ask and here they can present it.

Mollye Barrows: Well, it’s gonna be interesting. Basically, both sides … he wants them, both sides, to present the best science that they have available to support the claim so this will be the first time that these arguments, that have been going on for decades, on both sides of this climate change issue, will be presented on the record. It’s going to be interesting, it’s unofficially putting climate change on trial and it’s also, if he does move forward with allowing the cities of Oakland and San Francisco to move forward with these suits, there are other cities, other counties in California and as well as New York City, that are gonna file similar lawsuits and they’re basically saying, hey, we gotta spend a lot of money, you guys are responsible for contributing to climate change and the problems that we have in issues of global warming so we’re gonna need you to help pay for infrastructure that’ll protect us from that, from rising sea levels and so we want you to be held accountable and also admit that you downplayed this. Not only did you know that this was going on, you effectively launched campaigns to keep people believing your lies. That human activity isn’t to blame.

Mike Papantonio: Okay, so here’s what happens. Exxon and the oil companies make gazillions of dollars for decades. Now, they know, as they’re making this money, that they’re passing this risk on to the next generation and the next generation tax payers, they’re the ones that have to solve the problem when there’s salt water intrusion like we’re seeing down in Miami or all over the coast of the United States or, when there are changes that we simply can’t adjust to, when there are geographical changes that take place that the locality can’t adjust to. So, the truth is, this judge should take a look at this and say, okay, you’ve done this. Now, why do taxpayers have to pay for your problem. You see, why should taxpayers have to pay for your profits you’ve made all of these years? My guess is the best thing the oil companies are gonna try to do is try to legislate away the rights of cities and counties to be able to bring cases like this.

Mollye Barrows: To cut them off at the knees.

Mollye Barrows: Well, it’s interesting because so far what they’re saying is they’ve asked the judge to dismiss the lawsuit saying, hey, Congress regulates the laws that regulate or handles the laws that regulate fossil fuels. Take it up with them. They’re allowing us to do what we do. But so far, it looks like things are moving in the right direction or in the direction of allowing these companies to present the science. They’re not probably going to be on the same page by all indications, it’s not like all five of them, you hear from the attorneys on the other side and they’re saying well we’d love to hear what they’re gonna present. We feel very confident about our science. Like you talked about, seventy years worth. So, it’s gonna be interesting to see what they present. For example, Chevron doesn’t plan to argue about the specifics of climate change, they’re not going to engage in that debate. They basically want to present the conclusion of an international panel of scientists that said it’s extremely likely that people have contributed to the problems with climate change since the mid 1900s but, again, that doesn’t say much. It’s almost like they’re just taking this hands off approach.

Mike Papantonio: They say they’ve got an exit strategy. The exit strategy is gonna be bankruptcy or it’s gonna be congressional changes to where cities and states, even, are preempted from going after these companies. I promise you, that’s where this is headed.

Mollye Barrows: How far back do you think that plan goes?