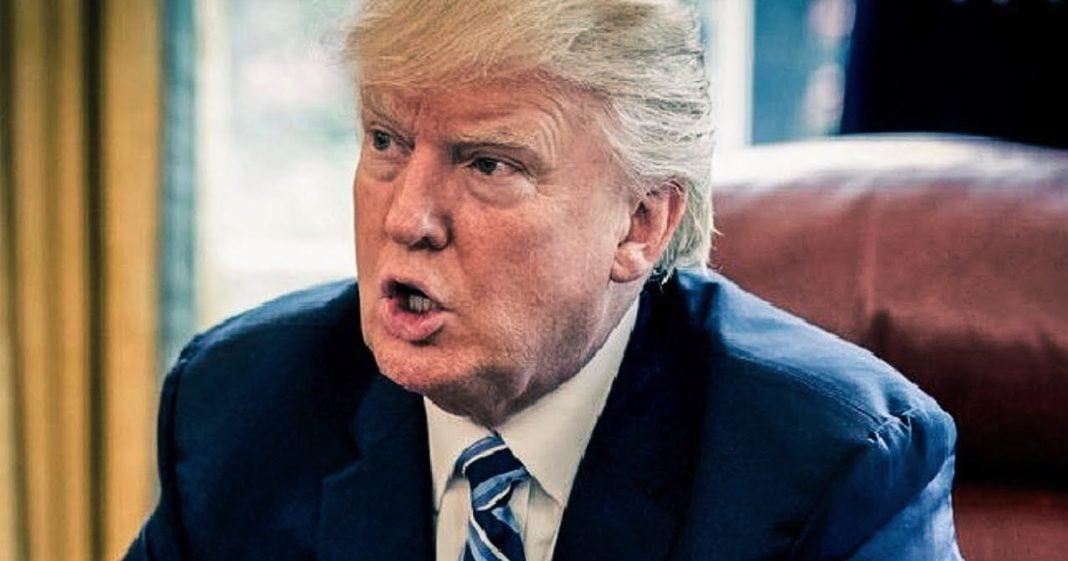 Donald Trump was in full meltdown mode on Wednesday morning when he threatened to strip media credentials from media outlets that weren’t being nice to him. According to Trump, 91% of the stories being run about him are completely fake, though he offered no source for his statistic. Ring of Fire’s Farron Cousins discusses this.

On Wednesday morning, probably reacting to all of the horrible news that came out about his attorney on Tuesday evening, Donald Trump decided to get on Twitter and do what he does best, attack the media. In a very incoherent and untrue tweet, Donald Trump went after the media for being so negative about him, and went on to suggest that we should actually just get rid of their credentials until they start being nice. Here’s the tweet, word for word, from the president: “The fake news is working overtime, just reported that despite the tremendous success we are having with the economy and all things else, 91% of the network news about me is negative, fake. Why do we work so hard in working with the media when it is corrupt? Take away credentials?”

All right, several things to address here. First and foremost, that 91% figure actually came from a right-wing organization that only looked at three different networks, ABC, CBS, and NBC, and it only looked at what they’re covering in primetime, and they decided that 91% of that was negative about Donald Trump. Didn’t include MSNBC, or CNN, or Fox News, or any of that, so first of all, their research methods are crap, and they’re completely biased. But more importantly, maybe, I’m just throwing this out there as a possibility, maybe if you did something good, people would start saying good things about you. Maybe if you weren’t such a bombastic idiot all the time on Twitter, people wouldn’t be calling you a bombastic idiot in the media, but you don’t understand that. You think you just deserve feigning praise from everyone for no reason whatsoever. No, no, no. You want people to be nice to you and say good things? Then you have to be a good human being.

Now, that’s one part of it. The second part of it is this. You’re threatening to take away their credentials. You’re threatening to curtail the First Amendment to the United States Constitution, and all of your idiotic followers who get up in arms, quite literally, when we suggest doing something about gun control. They say, “No, that’s an attack on the Second Amendment.” Well, guess what? The president of the United States is threatening to take away parts of the First Amendment because he doesn’t like when they’re mean to him. You know, for all the talk of these Conservatives saying that Liberals are snowflakes, and they’re special, and oh, you got to treat them with kid gloves, your president is literally worse than anyone I have ever seen on the left.

In fact, your whole side, you guys are nothing but little, sensitive, whiny, bitchy snowflakes, and that’s why you elected Trump, because he’s just like you. He can’t take any criticism. He can’t take anyone asking him the hard questions, and furthermore, the media’s not even being that mean to him. When you look at the fact that they refuse to say that he lied, they’ll say he told an untruth. He changed his position on whether or not he knew that he paid Michael Cohen for the Stormy Daniels payment, changed his position. No, he fucking lied, and the media won’t call him out on it, so if you want to get pissy saying that the media’s not being nice to you, I think you need to take a step back and understand that they should be being far more mean and intense with you than they currently are.