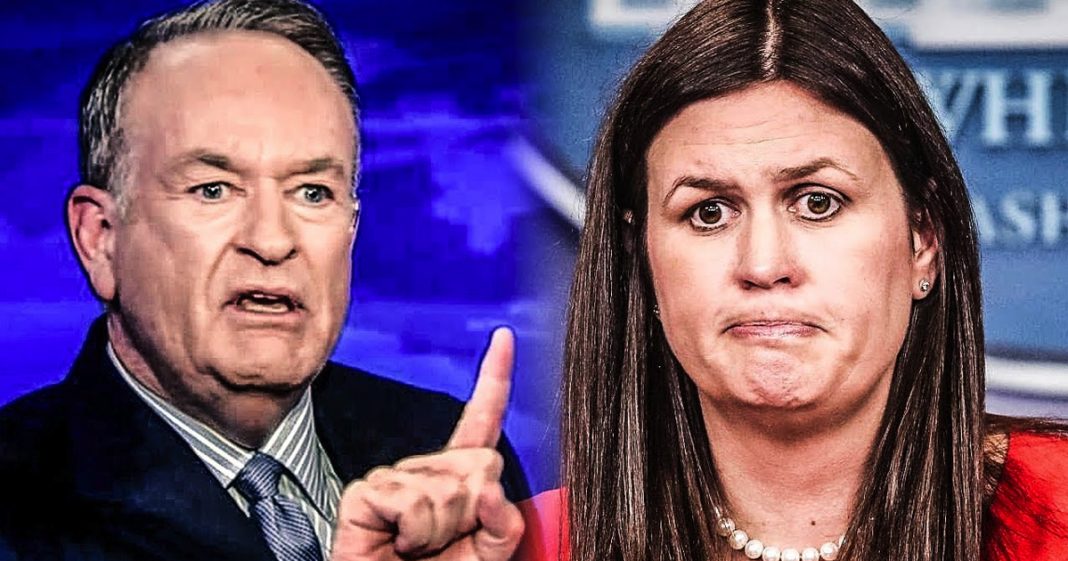 Former Fox News creep Bill O’Reilly must be having trouble finding full time employment, because reports say that the former Fox host offered to “stand next to” Sarah Huckabee Sanders during her daily press briefings in case any reporters “got out of line.” O’Reilly said that he wouldn’t hesitate to let these reporters know that he doesn’t like their behavior, but maybe his real reason for the offer is so that he can put the moves on Huckabee Sanders? Ring of Fire’s Farron Cousins discusses this.

According to Bill O’Reilly, it was the first time they’d ever met, they got long great. O’Reilly says he did most of the talking as usual, but he did offer Huckabee Sanders a favor should she ever want it.

Bill O’Reilly, according to him, told Huckabee Sanders that he is more than willing to go and stand next to her at that podium during those daily White House press briefings, to make sure none of the reporters in the room get out of line.

In fact, he says, “If somebody gets out of line, I will tell them exactly what I think of their behavior.” Nothing says intimidation, right? Like an elderly man covered in liver spots standing next to a woman that is immune to the truth. I’m sure Bill O’Reilly standing next to her is gonna strike fear into the hearts of all of those journalists. Like what the hell is he gonna do? Like grab the microphone from her and say, “That’s a mean question, you meany old mean head.”

Furthermore, is this guy that hard up for work? I mean has he not been able to secure any kind of full-time employment since being fired from Fox News, that he has to offer to go stand next to a woman at a podium while she speaks?

Bill O’Reilly is trying to be this knight in shining armor right here. He goes on to say, “I said Ms. Sanders, with all due respect, if you even need me to stand next to you in those briefings, I will volunteer to do that. And if somebody gets out of line, I will tell them exactly what I think of their behavior. She’s representing her country in very circumstances, extremely difficult, and she’s a patriot. You know, she’s taken an enormous amount of abuse, enormous.”

As I’ve said before, I have no sympathy for Sarah Huckabee Sanders, right? She makes the decision to go out there every day and lie to the American public, be combative with the press when they’re doing their jobs of asking questions, you can’t get pissed off about that, Huckabee. But she does anyway. And now Bill O’Reilly wants to come in, swoop in and save her. Why?

I don’t think it’s because he hates the media. He does hate the media, but I don’t think that’s why he wants to do this, I think Bill O’Reilly is reverting back to his creepy old ways that got him kicked out of Fox News to begin with. Maybe he’s having trouble not securing a full-time job, but securing a date. Maybe women don’t wanna go near him because they know he’s a serial sexual harasser, and so that’s why he wants to get closer to Sarah Huckabee Sanders. Maybe he thinks if stands next to her, acts like a tough guy, maybe she’ll fall for him. That is my theory about this whole thing, because once a dirty old man, always a dirty old man. And that is exactly what Bill O’Reilly is.