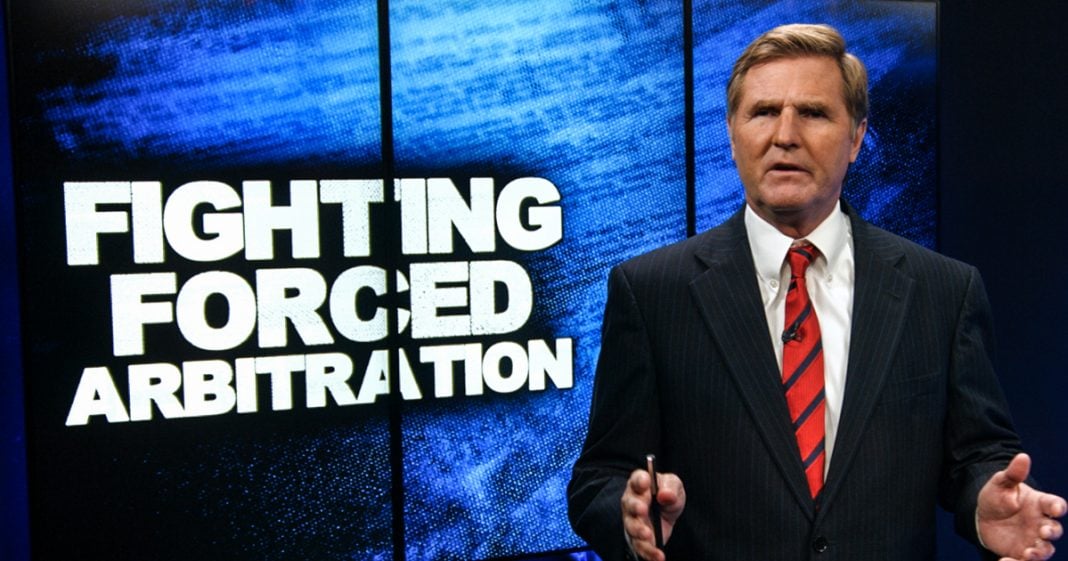 It seems like corporations in the United States will stop at nothing in their quest for profits. One of their most notorious actions is stripping American consumers of their constitutional right to hold corporations accountable when they lie, cheat, and steal. While it may seem like a gross abuse of power, businesses have been stripping American consumers of their rights for the last decade with binding arbitration clauses that they tuck into their contracts. These contracts take away your right to sue a company, or join a class action suit against a company, and force you to go before a corporate-friendly arbitration panel that will most likely rule for the corporation.

One of the biggest scams ever collectively pulled off by corporate America is forced arbitration. To put it in its simplest terms – forced arbitration eliminates a consumer’s right to sue corporations when they deceive them.

Millions of Americans have agreed to this by signing “arbitration clauses” in contracts; They’re in your credit card contracts, your cell phone plans, your car and mortgage loans – the list goes on and on as corporations are making sure that they’re the ones with a legal advantage over you, for when they find themselves in trouble.

And when they do, that contract you singed won’t allow you to file a lawsuit or create a class action against them for ripping you off, instead, you’ll have to go before a panel of arbitrators to resolve the dispute.

Unless you are a board member of one of these corporations, there is no way that these arbitration clauses will help you.

I’ll give you an example of how this scam works: Usually corporations pick the arbitrators so they know they are going against a friendly audience; They also have the benefit of having almost endless money to drag out the process, where most consumers can’t even afford to hire a lawyer. And when you’re talking about small amounts of money, it can cost a customer more to arbitrate than they could ever get back in damages. And even if a consumer is willing to jump through the countless hoops corporations put in place, studies show that it is businesses who win 80% of the time.

The deck has been stacked against American consumers.

Now here’s a quick example of how this issue can hurt you personally – suppose your credit card company or cell phone company was overcharging you 5 dollars a month. And not just you, but 10 million people a month.

Because you signed that arbitration agreement, you can’t join a class action lawsuit with the other victims. Instead, each of you has to hire your own lawyers for hundreds of dollars an hour just to get your 60 dollars back. You lose money in the process even if you win, while the corporation pockets 50 million dollars.

Right now, the Consumer Financial Protection Bureau is trying to work on rules to prevent corporations from using these binding arbitration clauses in their contracts, but they are facing stiff opposition from elected officials in Washington, D.C.

When you have both major political parties in the United States controlled by Big Business, class action lawsuits and trial lawyers are the last line of defense for the American public. And that’s why corporations have been trying for decades to paint plaintiff’s attorneys negatively.

And it’s important to remember that the attack on trial lawyers is corporate America’s way of getting consumers to go along with their attacks on our Constitutional rights. By convincing consumers that lawyers are the problem, they become willing to give up their right to sue those corporations. And when that happens, consumers lose every single time.