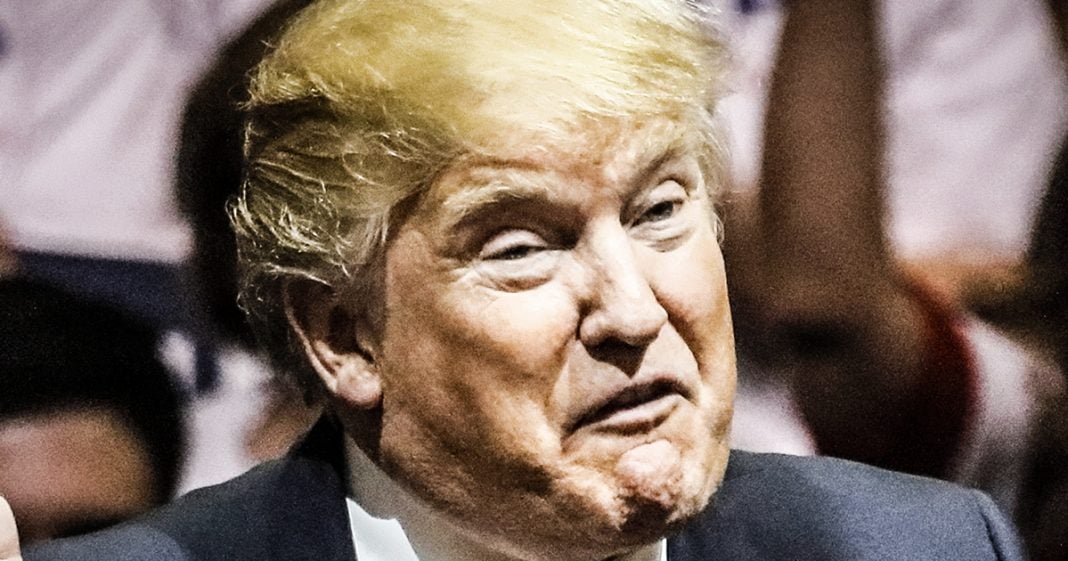 Donald Trump is apparently furious about Rudy Giuliani’s nonstop media circus, and reports say that his is fuming behind the scenes to his staffers and associates. To be perfectly honest, Trump has good reason to be angry. Every time Giuliani goes on TV he ends up making life so much worse for Trump, as Ring of Fire’s Farron Cousins points out.

As per usual, Donald Trump is pissed off right now. But this time, to be perfectly honest with you, he’s got a good reason to be pissed off. Donald Trump, according to reports, has been fuming behind the scenes to staffers, to aides, confidantes, and other members of the administration about how angry he is about Rudy Giuliani’s nonstop TV appearances that always seem to make life so much worse for Donald Trump.

In fact, reports from Tuesday morning say that Donald Trump is considering telling Giuliani that he is no longer allowed to go out and be on camera talking to the media as Trump’s attorney. What does this mean? Is Donald Trump two weeks, three weeks after hiring Giuliani already ready to fire him? I think he is ready, but I don’t think he’s actually going to do that because as we’ve seen too many times in the past, doing the right thing in a situation would reveal that Trump had to first make the wrong decision. He’s done this so many times throughout his very short presidency. He picks the wrong person for a job, they get in over their heads, make life so much worse for him, but he won’t fire them because he’s the one who handpicked them. If he has to say that, yeah, this guy is pretty bad, he’s crappy, then that means you had poor judgment at one point in your life.

Donald Trump is going to ride this Giuliani train all the way down into the ground. Maybe he’ll prevent Giuliani from going on the air, but I don’t think so because Giuliani, just like Donald Trump, has a massive ego. Going on these TV shows is not just about defending Donald Trump. It’s about going on TV shows, which is what Rudy Giuliani wants. His biggest fear, much like Trump himself, is becoming irrelevant, becoming forgotten. So, Giuliani’s not gong to stop. Given the fact that the guy is a complete moron, he’s also not going to stop screwing up Donald Trump’s legal cases.

If that weren’t bad enough, we also still have Michael Cohen kicking around out there who is also pretty pissed off at Rudy Giuliani and he said recently that “this whole mess with Giuliani has made things so much worse. You know, I worry about my family. This is now hurting us so bad because what Rudy Giuliani has done.” To be honest again, look, the only thing Rudy Giuliani did was actually tell the truth, although when you’re trying to represent a client and get him off the hook, you can’t always just flat out tell the truth. You kind of have to dance around it, you have to muddy the water, and you have to present it as if what happened wasn’t that bad.

But, instead, you’ve just gone out there, Mr. Giuliani, and said, “Yeah, maybe he paid off other people. I don’t know. Hell yeah, he reimbursed Cohen. Am I not supposed to say that ’cause I don’t know too much about the law.” That’s the bottom line here. I said that the day, the day, he picked Giuliani to join his legal team that this guy wasn’t really a lawyer. Yeah, he went to law school, he was a prosecutor and all that, but those were decades ago. Do you know how much the law has changed in the last 35 years? The last client that Giuliani represented in a court was well over a decade ago and that was the opiod industry who ended up paying more than $600 million because Giuliani couldn’t get him off the hook. Not exactly the kind of guy that should have joined the president’s legal team, although I’m sure everybody on the left is absolutely loving this because every time Giuliani opens his mouth, he makes Donald Trump’s life that much worse, and nobody deserves that more than Donald Trump.