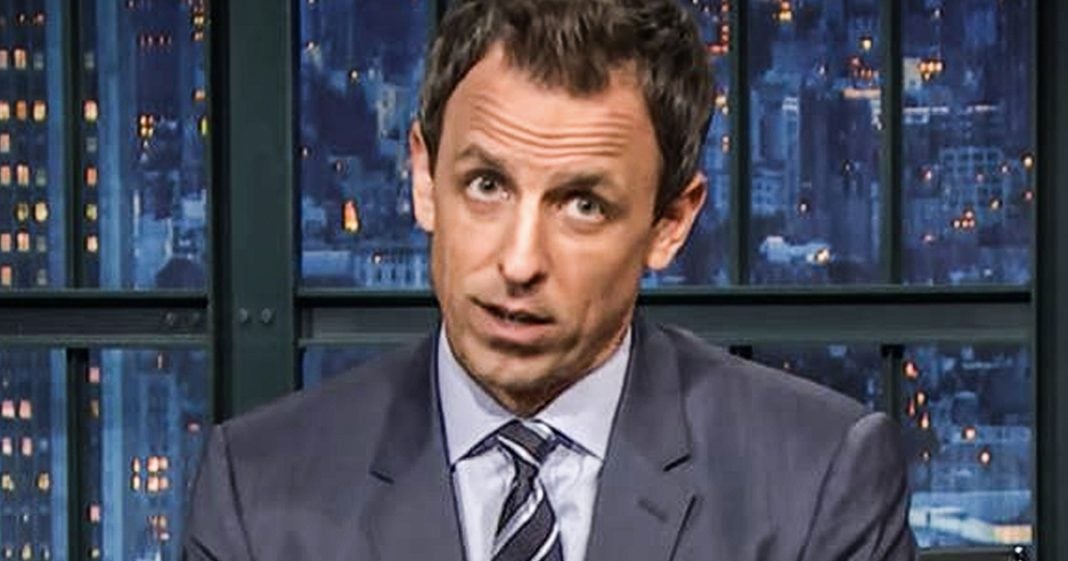 Donald Trump is certainly one to hold a grudge, and late night talk show host Seth Meyers understands that better than anyone. According to Meyers, Donald Trump is still angry about the fact that Meyers roasted Trump during the 2011 White House Correspondents Dinner to the point that he refused to go on Meyer’s show unless he issued a formal apology. Ring of Fire’s Farron Cousins discusses Trump’s fragile ego and why he loves to play the victim.

During a recent interview with Politico Magazine, Seth Meyers, late night talk show host and comedian, said that Donald Trump demanded an apology from him if he wanted him to go on his late night talk show program. Now, here’s what happened. Back in 2011, Seth Meyers was the host of the White House Correspondents Dinner, and he took a few jabs at Donald Trump during his monologue, as most hosts do. Stephen Colbert, years before that, absolutely roasted George W. Bush, who sat there and laughed at it because he actually had a bit of a sense of humor when he wasn’t starting unwinnable wars.

Nonetheless, Trump was super pissed about this 2011 White House Correspondents Dinner. Four years later in 2015, when Seth Meyers was trying to get then candidate Trump to come on his program, Trump’s people told Meyers that he’ll come on, absolutely, with the condition that you issue a formal apology for what you said about him four years ago.

Now, we know that Donald Trump holds grudges. He just loves to hate. That’s what’s going on here; or at least that’s part of it. The other part is that Donald Trump has such a fragile little male ego that he can’t let anything go. If you insulted him four years ago, or eight years ago, or 20 years ago, you either one, got sued for it, as we’ve seen too many times in the past. Or, two, he’s going to remember it until the day he dies. Even if you apologize, he’s never really going to forgive you; because it hurt his little feelings.

He is the typical bully in the United States. You stand up to him, you give them a piece of their own medicine, they back down like a coward because that’s what they truly are deep inside. That’s what Donald Trump is. Seth Meyers shouldn’t have to apologize for anyone for a humorous rant at something that was meant to be humorous. Did Donald Trump demand apologies from everybody who joined in to his Comedy Central roast? To be honest, I wouldn’t be surprised to learn that.

That’s not how the world works, Donald. If you want somebody to apologize for roasting you at something that was supposed to kind of be a roast, then you need to get on Twitter immediately and start apologizing to the hundreds of people over the last 18 months that you have taken to Twitter to personally insult for their appearance, their speaking patterns, their mannerisms, and their looks. You want to make changes in this country, then you be the one to start it; but don’t demand apologies from late night hosts doing comedy routines that your little snowflake self was too fragile to handle.