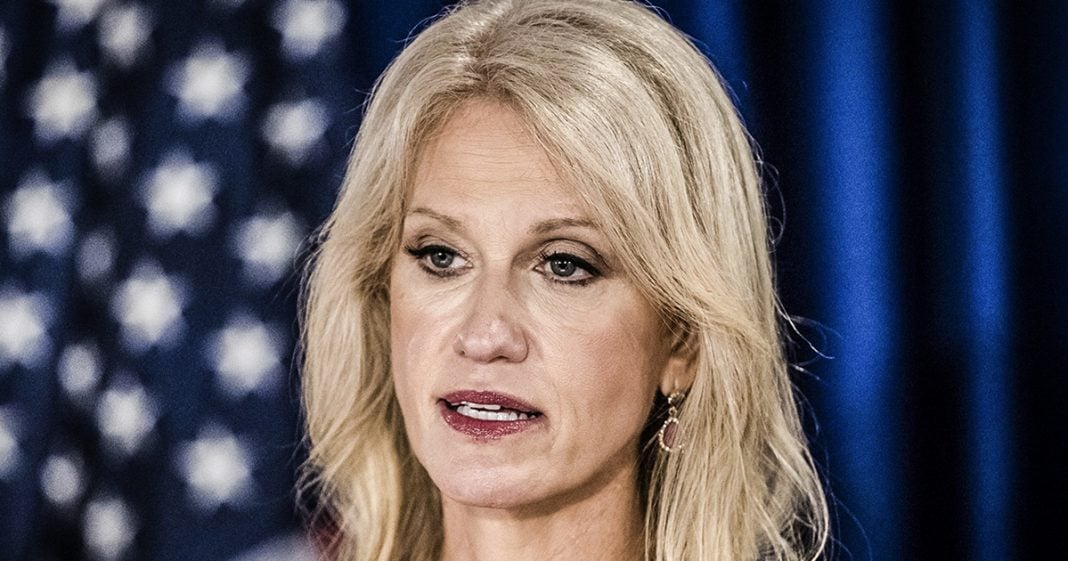 New York Attorney General Eric Schneiderman abruptly resigned on Monday evening after a damning new report from The New Yorker revealed his violent actions towards women. And immediately following the story’s publication, right wingers were dancing in the streets, celebrating his ouster. Among the most vocal was Kellyanne Conway, who tweeted nonstop about the perversions of Schneiderman, all while getting roasted by the internet for refusing to take a stand against her own boss for his misconduct. Ring of Fire’s Farron Cousins discusses this.

On Monday evening, just three hours after a new report in The New Yorker came out, showing that New York Attorney General Eric Schneiderman was sexually violent towards several different women. Four women actually came forward with these allegations. Three hours after that story broke, Schneiderman resigned. So he is no longer, effective the end of the day May 8th, 2018, the Attorney General of the State of New York.

But immediately, when that story broke, something else happened. You had people, specifically Kellyanne Conway, go on Twitter talking about what a disgusting, and violent, and horrible human being Eric Schneiderman was. Then after he resigned, she Tweeted out simply, “Got ‘cha.” Kellyanne Conway was so hell-bent on letting us know that what Eric Schneiderman did was wrong, which it 100% was, and he should have resigned. It shouldn’t have even taken him three hours. He should have resigned the second that story came out and we all realized what a piece of crap he was.

And actually, the majority of people, almost all that I’ve seen on the left, agree with that. There was no excuse for this and Schneiderman should have been gone like that. But, Conway decided to make this all about how Liberals are horrible for women. Really? Nobody on Twitter bought it though. In the comments, the responses to her attacks on Schneiderman, people were saying, “Yeah, bravo, Kellyanne. So when are you going to resign because you work for a guy that’s done the same, if not worse, to at least 19 different women?”

And that’s the problem here. There’s no self-awareness amongst any of these Republicans. They were so quick to jump out there and say that, “Ha, we got Schneiderman. Look at this,” ignoring the fact that the man sitting in the White House is so much worse than all of it. And this is not meant to excuse what Schneiderman did in any way possible. It’s just to show you the difference. Liberals, Democrats, Progressives, whatever you want to call them, they get caught doing crappy things because they’re crappy people, they’re gone. Frankin, Schneiderman, Wiener, bye. Nobody misses you.

But Republicans, hell, you got a governor right now who’s under his third felony investigation with the Republican Party, and he hasn’t stepped down. Donald Trump goes on Twitter and slanders the women who have accused him, and these jackasses like Kellyanne Conway stay silent. You don’t get to only believe the victims when they’re accusing a Democrat of this behavior. You have to believe all of them. They all deserve the chance to be heard. And that’s all they’re asking for right now, Kellyanne. But you were so hell-bent on taking down Schneiderman, why? Because you’re scared of him.

Donald Trump Jr. Tweeted about it. Mike Cernovich, Dana Loesch, they were all dancing in the streets, along with Kellyanne Conway over the fact that Eric Schneiderman was a piece of crap. Well, you know what they say about people in glass houses, right? And I think you guys need to take a good long look at the man that you’ve put in the White House and blindly supported since day one, because the things he has done, the things he has said on tape, are far worse than any of the other allegations that we’ve seen come out in recent months.