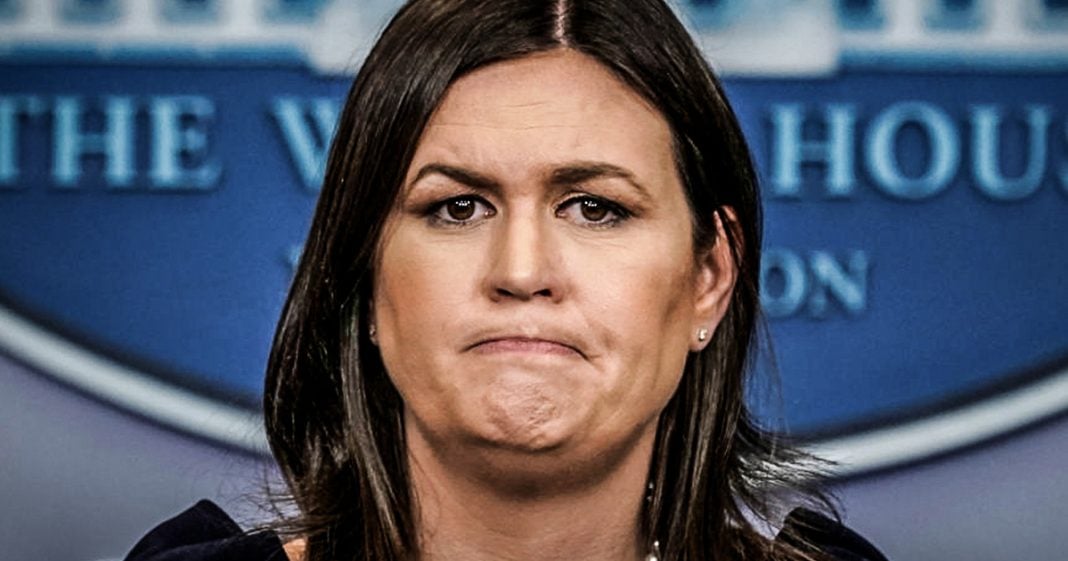 According to a new report by The Washington Post, Sarah Huckabee Sanders is absolutely furious with Rudy Giuliani for making her job almost unbearable with his disastrous interviews. On top of that, new information is beginning to surface showing that Huckabee Sanders has threatened in the past to stop speaking on behalf of Trump unless the administration starts telling her what the hell is going on around there. Ring of Fire’s Farron Cousins discusses this.

White House press secretary Sarah Huckabee Sanders has had a really bad week and a half. And from the looks of things, it’s not going to get better any time soon. See, last week when Rudy Giuliani decided to go on Sean Hannity show and then follow it up the next morning with an appearance on Fox and Friends, according to Sarah Huckabee Sanders, the things that Giuliani admitted during those interviews like Donald Trump knew about the money he was paying to Michael Cohen to pay off Stormy Daniels, it made her job “untenable”, which basically means that Sarah Huckabee Sanders is having trouble doing her job because of idiots like Rudy Giuliani. She actually admitted in the press briefing late last week that she had no idea that those payments were even made because nobody told her anything.

But that’s just the tip of the iceberg. You see, the Washington Post decided to go back a little bit further and kind of dig in more into Sarah Huckabee Sanders and find out why she is the way she is. And as it turns out, nobody in the White House is telling her anything. They’re letting her go out there every day without all of the facts and information. And it actually goes back even further. There apparently was a big blow up at the White House involving Sarah Huckabee Sanders during the entire Rob Porter wife beating scandal because nobody bothered to tell Sarah Huckabee Sanders what happened. So she had to go out to the podium without any information, take these questions, make stuff up off the top of her head hoping that it was right, of course it wasn’t. And so she gets pummeled by the media for going out there and lying every day.

So at that time, according to this report by the Washington Post, Huckabee Sanders threatened the administration, saying I’m not going to go out there and defend you or speak on your behalf anymore until you start giving me all of the information. Well, guess what. As we’ve seen from the last few days, that still hasn’t happened. So the big question at this point is, what will become of Sarah Huckabee Sanders? If she already threatened to quit two and a half months ago, I can’t imagine that she’s still wanting to stay there after the same things that made her want to quit are happening every single week.

I have no sympathy for her thought. So don’t get me wrong on that. I’m not saying poor Huckabee Sanders doesn’t know what’s going on. She’s still making the conscious choice to go out there every day and lie and double down on those lies for the president and this corrupt administration. That’s all on her. If she’s worried that they’re not going to give her the information that she needs and she’s going to go out there and make a fool of herself, and still chooses to go out there and make a fool of herself, that’s on her. The only thing she can do at this point is walk away, maybe try to get a book deal, probably get a contributor gig on Fox News, and then let all of us know how dysfunctional and disgraceful this entire Trump White House has become.