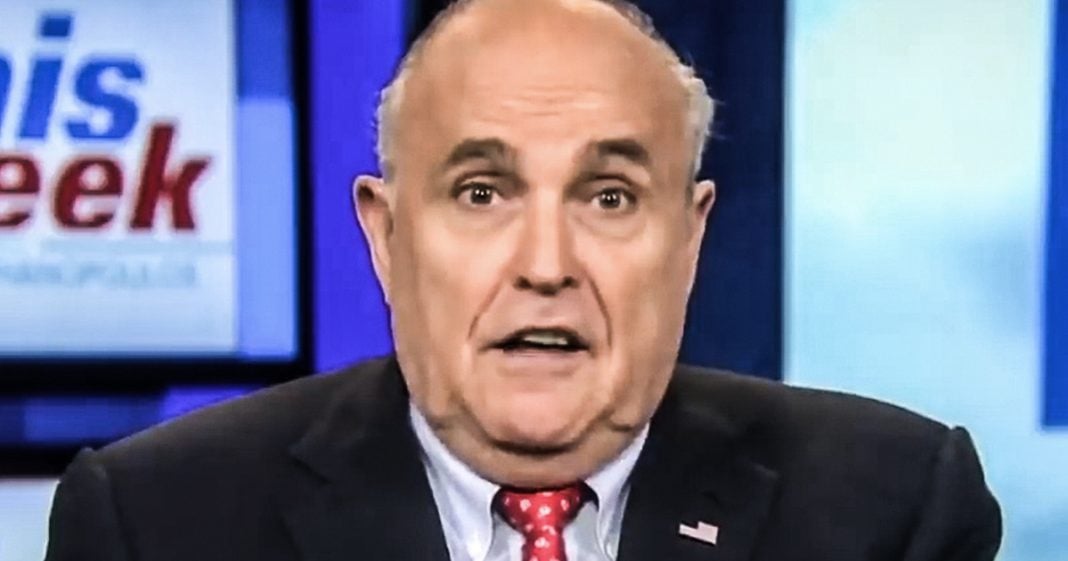 Rudy Giuliani needs to stop going in front of media cameras if he actually wants to win his case for Donald Trump. On Sunday, Giuliani decided to go on ABC with George Stephanopoulos, and the interview was anything but flattering for the Trump administration. During the interview, Giuliani left the door open to the possibility that Trump paid off MORE women than just Stormy Daniels, creating a possible new area of investigation for authorities. Ring of Fire’s Farron Cousins discusses this.

One of the best things that Rudy Giuliani could do as Donald Trump’s newest attorney, would be to basically stop talking to members of the media. You see, after his disastrous set of interviews last week on Fox News, Giuliani somehow thought it would be a good idea to go on a more hostile network, ABC, to speak with George Stephanopolous about the whole Stormy Daniels/Michael Cohen thing. And, it went exactly as you would expect it to. Here is what Giuliani said during that interview with George Stephanopolous.

George Stephanopoulos:
He knew about it at the time. I think there’s a question about when did you find out?

Rudy Giuliani:
No, of course not. It would be a conflict right now for him to be the president’s attorney. I am, in this respect, so is Jay Sekulow, so are the Raskins. And then of course he has White House council, as you know from working in the White House. That’s not quite your attorney, that’s really the presidencies attorney.

George Stephanopoulos:
Correct. And you said he … arrangement he had with Michael Cohen. So did Michael Cohen make payments to other women for the president?

Rudy Giuliani:
I have no knowledge of that, but I would think if it was necessary yes. He made payments for the president, or he conducted business for the president, which meant he had legal fees, monies laid out, and expenditures, which I have on my bills to my clients.

So, according to Giuliani, who in the entire clip actually admitted he’s only about half way through all of the information that he needs to get up to speed, it’s totally possible and plausible that Donald Trump and Michael Cohen had to pay off more women than just Stormy Daniels, to keep them quiet about affairs with the president.

I don’t know if Giuliani is just grossly incompetent, or if he’s carrying out one of the great espionage acts in American history with inside the Trump campaign. But this is absolutely hilarious what he is doing to the President. You basically just admitted that there could be more of these potentially illegal payments floating around out there, but you’re not sure because you’ve only read about half the stuff that you have available to you.

Do you realize what you’re doing to your client at this point? Do you understand that people could easily go to jail for this? And you try to defend by saying that no, no, no it was personal money, none of it came out of campaign money. So how could it be a campaign contribution?

Are you that ignorant about campaign laws? It doesn’t have to come out of the campaign funds, that’s never what any of this was about. It was about whether or not the money was used to aid the campaign, making it an in kind contribution.

The money didn’t have to go to Donald Trump, it didn’t have to go into a special account. But if that money was spent to aid the campaign, then guess what? It counts as campaign money, and you’re out there on TV on a near daily basis at this point, admitting that that is exactly what the president did.

Furthermore, after this disastrous interview, Donald Trump took Rudy Giuliani with him to the golf course, to I guess give him a talking to about all of this media appearances. And since then, obviously, we’ve had a little bit of silence from Giuliani on these issues. But there’s another thing too I have to wonder about this clip, and this is more of a personal nature. What the hell is going on with Giuliani’s face?

If you go and click the link in the description and watch the thing, I mean every few seconds the guy’s tweaked out or something. I don’t know what’s going on. All I know is that this is not the kind of guy that any reputable American citizen would want defending them in court, and more importantly nobody would want to have this guy doing and saying the weird things that he’s doing going on TV to defend them.