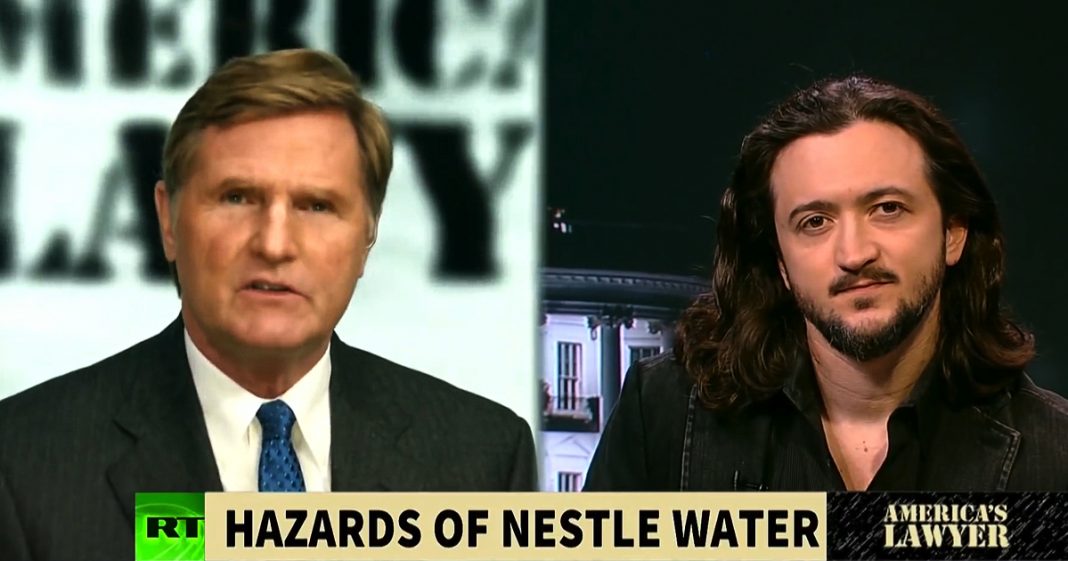 Via America’s Lawyer: Mike Papantonio and Lee Camp talk about a new report that says bottled water was found to contain high amounts of micro-plastic particles.

Mike Papantonio: When it comes to corporations operating without any regard to human health and safety, the Nestle corporation really seems to be in a league all of its own. The company’s been charged with using indentured servants in parts of Asia, they’ve been accused of using child slave labor in parts of Africa. They’ve been trying to steal water everywhere from Brazil to Flint, Michigan. Unfortunately, the Nestle story is still one of the most … people in the United States don’t understand. They’re not aware of what’s going on with this company. Part of that’s likely due to the fact that the Nestle controlled company has a good portion of our food, making them a huge advertiser in corporate media.

Recently, a new study emerged that once again provides some bad news for Nestle and countless other corporations that sell bottled water. Researchers have found that most bottled waters contain huge numbers of particles called microplastics, with Nestle’s Pure Life bottled water containing a staggering, staggering 10,000 microplastic particles per liter. There haven’t been too many long term studies about the dangers of microplastics in human bodies, but animal studies have shown that microplastics can cause reproductive problems, genetic disruption and plastic poisoning. Researchers have little reason to believe that these problems wouldn’t also occur in human beings if they ingest enough microplastics.

Joining me now to talk about this is Lee Camp, host of Redacted Tonight, here on RT America, an all-round very smart guy. Lee, what does this new microplastic report contamination in Nestle’s water, what does it tell us? This is a pretty ugly report if you take a close look at it.

Lee Camp: Yeah, Mike. Thanks for having me on. I mean I guess we shouldn’t be surprised that these bottled waters that we’ve all been drinking for decades now are not really the best way to take your water in. Some of the plastics that are being found in these things are polypropylene, nylon, polyethylene terephthalate. I don’t know about you, Mike, but when I look for a bottle of water, I’m really looking for a nice cold glass of polyethylene.

Mike Papantonio: Lee, after a hard, maybe exercise, you run a mile, you say, “I really want some water.” You certainly don’t want 10,000 particles of the plastics that you’re describing right here.

Mike Papantonio: But it’s phenomenal to me.

Mike Papantonio: I mean, yeah. Exactly. Picking the name … Here’s the point. Look, most people don’t know much about Nestle to begin with, and there’s a reason for it. As I’ve just said, they’re huge advertisers. They’re in every aspect of our food, so the networks sure don’t want to do any bad stories about Nestle. Take a look sometime. See how often ABC, NBC, CBS do anything where they talk about Nestle being as corrupt as they actually are. You won’t find it.

Look, Nestle has had their hands in just about every kind of dispute imaginable with regards to water, especially in Flint, Michigan. Can you tell us what the company has been up to in Flint, of all places, where people are already in a disastrous kind of way when it comes to the quality of the water?

Lee Camp: Yeah. Flint, Michigan, has gone like 1,000 days now with tainted water. Apparently it is getting a little cleaner recently, but Nestle is near there, in Michigan, extracting amazing amounts of water, making a lot of money. They make between half a million and $1.5 million a day from the water they extract near Flint Michigan, and they pay, get this, $200 a year for the right to steal that water. Now, just recently, this month, a bill has come up in the Michigan legislature where they’re trying to make it easier for these corporations like Nestle to steal the ground water. They’re basically signaling to corporations, “Hey, we’re going to make it as easy as possible for you to steal our water from our people here in Michigan. We’re open for business. Come, take it all.”

They’re also trying to make it more secretive. The bill that they want to get through would make it so that this extraction process would be … a FOIA request couldn’t even get the information as to whether this water is being tainted, how much of it’s being taken. It really is just a massive extraction, taking it from the people that live there in Michigan. Something else you won’t hear, which also has to do with this extraction, is only 5% of the fresh water used in our country goes to home use. 55% goes to animal agriculture, so this bill is also designed to help the big ag companies continue to exploit the fresh water in this country.

Mike Papantonio: Well, yeah. Part of that story about them extracting all that water from Flint, Michigan, that repeated itself in California, where the legislators there, the governor, everybody involved with politics, allowed them to take out similar amounts of water in California and pay zero money for about 50 years. Then all of a sudden, one of the regulators found they’ve been taking all of our water during the drought seasons, during the worst part of the drought seasons. They’re extracting millions of gallons of water and they have paid zero money. Now, under the California law, they could have been prosecuted, but nobody did anything, and more importantly, Lee, nobody did any stories about it to explain who Nestle is, what kind of things they’ve been up to all over the world, and what they were doing right in Flint, Michigan, and what they were doing in California.

Now look. Their power trip goes far beyond the United States. You recently did, I thought it was an exceptional report, on Nestle’s activities in Brazil. Tell us that story. It’s a pretty sobering story. People need to pay attention to how corrupt this company actually is.

Lee Camp: Yeah. Nestle, and I’ll get to what Nestle said directly to me in a second here. Nestle, along with other companies, Dow Chemical and Coca-Cola and Anheuser-Busch are all part of the effort to privatize the Guarani aquifer, the second largest clean water source, fresh water source, in the world. They were apparently, according to reports, they were in advance talks with Brazil’s president, who’s dealing with corruption scandals of his own, to do that privatization, this conglomerate. Now, when you look a little deeper into it, they’re all part, all of those companies, Anheuser-Busch, Dow Chemical, Nestle, are all part of the 2030 Water Resources Group.

When you look a little into that, you realize this is a World Bank program, a World Bank sponsored program to basically help privatize the remaining fresh water on our planet. These have all gotten together to do this. Really disgusting. Basically they’d have exclusive rights to this fresh water for 100 years under the deal. Basically what it is is it’s a reputation laundering service. The Water, 2030 WRG it’s called, it’s a reputation laundering service. It would look bad to say Nestle bought the Guarani aquifer, or Coca-Cola did, so instead it will say 2030 WRG, this wonderful thing, has agreed to this deal with the Guarani aquifer to take care of it. It’s really a way of privatizing things that is a little quieter, doesn’t have the name Nestle in it on all the headlines.

When I reported on this, Nestle tweeted at me and said, “We have no interest in buying up fresh water in this world or privatizing,” or something like that. I then tweeted at them seven different sources saying this is what’s going on, and said, “Great. Tell me which one of these is inaccurate or false.” They never responded. For some odd reason, they didn’t want to tell me.

Mike Papantonio: Well, you may remember, it was about, I think it was about three years ago, where a revolution in South America actually almost started because of corporations coming and trying to privatize their water.

Mike Papantonio: It was so bad that there was a million people on the street. They were literally burning down the city around them because of this deal that had been done secretly. Nobody knew that these corporations were gaining control of the water. It was done behind closed doors. The American media didn’t report it. The foreign media didn’t report it. It was the same type of problem, big corporations who have big political clout, coming in and buying up water. That started years ago, so we know there’s something to this, that when they control water, they control power. In South Africa, as you might … I don’t know if you followed this story, where a household is only given 20 gallons of fresh water a day. I don’t know if you followed that story, but that’s happening throughout the planet. It’s one of those stories, again, that people aren’t reporting.

Nestle, they’ve always succeeded, Lee, in stealing other nations’ water. Guatemala is one of those cases where the company failed. Tell us what happened in Guatemala and why it failed, and what other countries need to do similar to this that was done in Guatemala.

Lee Camp: Well, yeah. Basically Guatemala, an activist succeeded in shaming Nestle enough that they actually dropped their partnership with REPSA, a palm oil producer that is linked to human rights violations, environmental destruction, corruption, and that is a big win. To ever get Nestle to feel shame about anything is pretty amazing. Obviously that’s just a first step, but it is a significant one, to show that this company, corporation can be shamed and can actually be pushed to the point where they will separate ties.

The same thing, as you mentioned earlier, happened with some of the basically slavery they were working with in the Ivory Coast and also in some of their fisheries in Thailand they’re accused of using slave labor. They can be shamed away from some of their worst practices, but it takes a lot to get there. As you mentioned earlier, there was a big … speaking of activist success, big success with the protest to have the right to water. I believe it was Ecuador several years back where they tried to pass a law, or they did pass a law saying you can’t even collect the rain water, you know, glasses. That’s illegal for you to collect your own rain water. The people stood up and they fought back and it was a big win.

Mike Papantonio: Yeah. If people don’t see this coming, Lee, again, one thing we know is that the media is not going to report it because Nestle is such a huge advertiser. The stories that you’ve talked about, if somebody were to go online right now, Lee, and they were to try to get the details about those stories, they would find those stories aren’t reported in mainstream corporate media because Nestle spreads around a lot of money because they have so many food products. That’s really part of the problem here.

The only way these stories are told is with people like me and you telling them on social media, different places throughout the country. You have to tell the story and it has to be told a lot of different ways before people actually say, “Yeah. This is a real problem and it’s something I ought to pay attention to.” Lee, thank you for joining me.