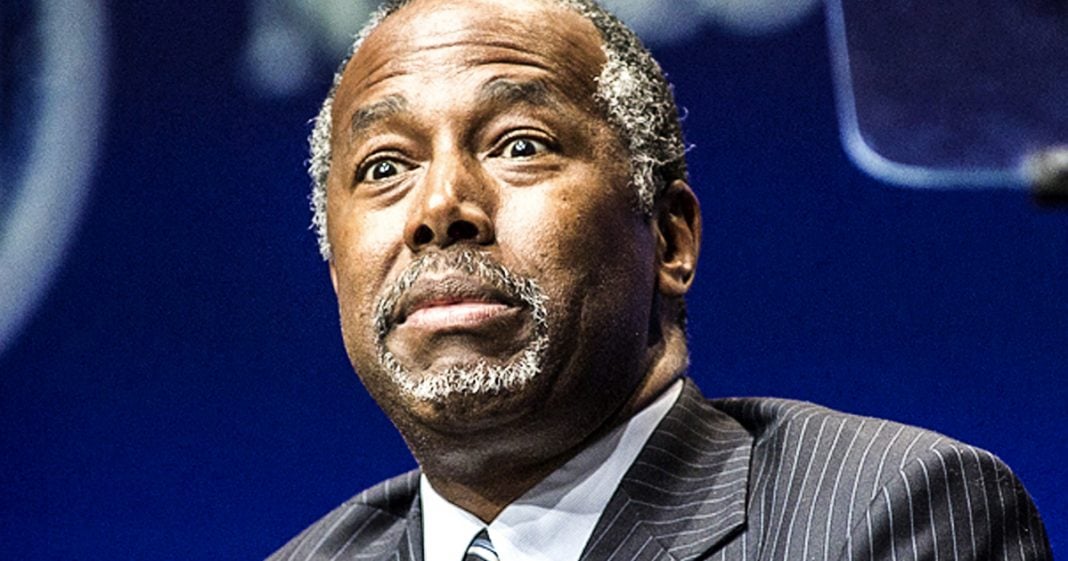 Ben Carson, the former neurosurgeon turned Secretary of Housing and Urban Development, is defending his agency’s plan to nearly triple the rent of low income Americans by saying that raising their rent will actually give them a way out of poverty. He believes that poverty is a “state of mind” and that the real reason these people are poor is because they are just lazy. Ring of Fire’s Farron Cousins discusses this.

Ben Carson, the former neurosurgeon turned Secretary of Housing and Urban Development, went on Fox News recently to defend his agency’s proposal to triple the amount of rent that about 4 million low income Americans have to pay each year. Now these are people who are on federal housing assistance programs or living in federal housing units overseen by HUD. But Ben Carson says, “You know what? Let’s triple their rent.” Why? Well, according to what Carson told Fox News, if we raise their rent, it’s going to incentivize them to get out of poverty. So somehow making people who already don’t have enough money pay more money just so they’re not homeless is going to get them out of poverty. Now before I get into the plan, I have to say this. I have no doubt that probably at some point in his life, Ben Carson was a very gifted physician. I mean, we’ve seen the results. He was. He had a few malpractice cases against him. But most doctors have.

However, I think there had to have been some kind of idiot savant thing going on with him to where he could be a gift brain surgeon and yet completely stupid in every other aspect of his life because if you think that making low income Americans triple the amount of money they pay in rent is going to pull them out of poverty, then you are not an intelligent individual. Furthermore, your statement that it’s going to incentivize them to get out of poverty shows that you think, just like every other disgusting Republican out there, that people are only poor in this country by choice. Everyone who’s poor, they made the choice to be poor. They’re lazy. They’re stupid. They don’t want to get off their ass and go work. That’s not true. These people have jobs. Many of them have more than one job. They just don’t make enough at those jobs. Their employers, as we’ve seen from studies all over this country, are stealing wages from them. They’re making them work unpaid overtime. They’re making them do all these things, screwing them over, not giving them benefits. It’s not the worker’s fault.

Some of these people aren’t physically able to work. They’re disabled, disabled veterans who aren’t getting taken care of after going overseas, fighting your wars, losing a few limbs, coming back with PTSD and you say, “Oh well. Enjoy your tripled rent. Maybe that’ll get you out of poverty.” Republicans have some kind of really, really gross disconnect from how this world actually works and nowhere else in this administration is that better exemplified than in Ben Carson himself.