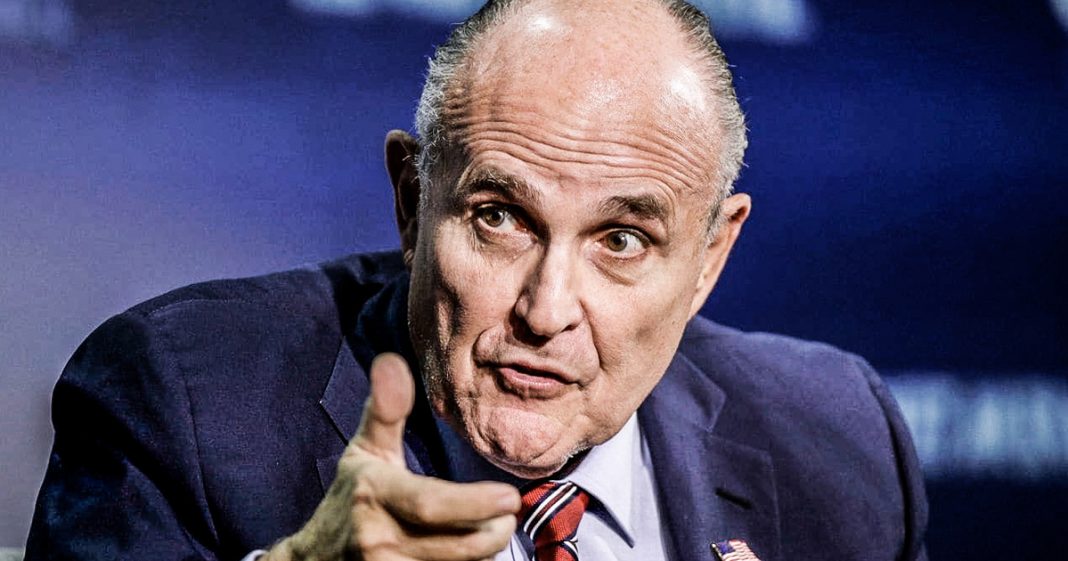 Rudy Giuliani made an awkward statement during his recent appearance on Sean Hannity’s Fox News program (even more awkward than admitting the President committed a crime.) During the appearance, he issued a warning to Robert Mueller to stay away from Ivanka Trump, which is a very odd statement to make to a federal investigator. It would seem that Giuliani might know something about Ivanka that he doesn’t want uncovered during an investigation, as Ring of Fire’s Farron Cousins explains.

During Rudy Giuliani’s Wednesday evening Fox News appearance with Sean Hannity, he said a lot of really stupid things that he probably shouldn’t have said if he wants the President to stay out of jail. But he didn’t only address the issues of Donald Trump. At one point during the interview, for no reason whatsoever, Rudy Giuliani decided to issue a warning to Robert Mueller, the special prosecutor, to stay the hell away from Ivanka Trump. “You better not investigate Ivanka Trump. You better not go after her.” Here is exactly what he said, “Ivanka Trump. I think I would get on my charger and go ride into their offices with a lance if they go after Ivanka. Now, if they do do Ivanka, which I don’t think they will, the whole country will turn on them. If they go after her, the whole country will turn on them.” He said the same sentence twice for some reason. “They’re going after his daughter.”

So according to Rudy Giuliani who, I don’t know if it was in the minutes before that or the minutes after that, admitted that the guy he’s representing committed a crime, believes that people in this country are going to get violent against the special prosecutor’s office if they start investigating Ivanka Trump. Now why, if you’re trying to put an end to this investigation, would you go out there and poke the bear that is Robert Mueller? Do you not remember what happened last summer when Donald Trump said, “Robert Mueller better not look at my personal finances. That’s the line.” And so Robert Mueller said, “Huh. I think I’m going to go look at your finances now because obviously you’re trying to hide something.” And Rudy Giuliani hasn’t been part of the Trump team for too long, but if Ivanka does know something I’m sure that Rudy Giuliani knows that she knows something, and he’s trying to do the same stupid thing that Trump did that backfired.

We know that Ivanka Trump was present when Donald Trump fired James Comey. We know that Ivanka Trump was on that private plane when they dictated Trump Junior’s response to the reports that he had met with that Russian lawyer at Trump Tower. Ivanka Trump, more so than probably anybody other than Donald and Don Junior, has been right in the thick of all of this. And I guarantee you Robert Mueller already knows that and they probably already got a good enough file on Ivanka Trump. So don’t sit there and try to act like tough guy Rudy saying, “You’d better not go after Ivanka or I’m going to get in my charger.” I guess he means Dodge Charger, I’m hoping. “With a lance” like you’re some kind of knight going to fight off an evil dragon whose only trying to bring the law and order back to the United States, back to the office of the Presidency.

And you, Rudy Giuliani, as stupid and horrible as you’ve been as a member of Donald Trump’s legal team after what, two weeks now? You’ve been there for two weeks and now you’ve poked Robert Mueller enough to where he might open a bigger investigation into Ivanka, and you kinda screwed your client, Donald Trump, over by admitting on national television twice that he committed a crime. Yeah. I don’t think you have the moral high ground to play knight in shining armor at this point, saying that you’re trying to protect Ivanka Trump. Robert Mueller knows what’s up. He is not intimidated by you, and he is sure as hell not afraid of you. And in fact, I don’t think many people in this country are intimidated by you at this point. So stop with the tough guy talk. You want to help your client stay out of jail? Then just stop talking altogether.