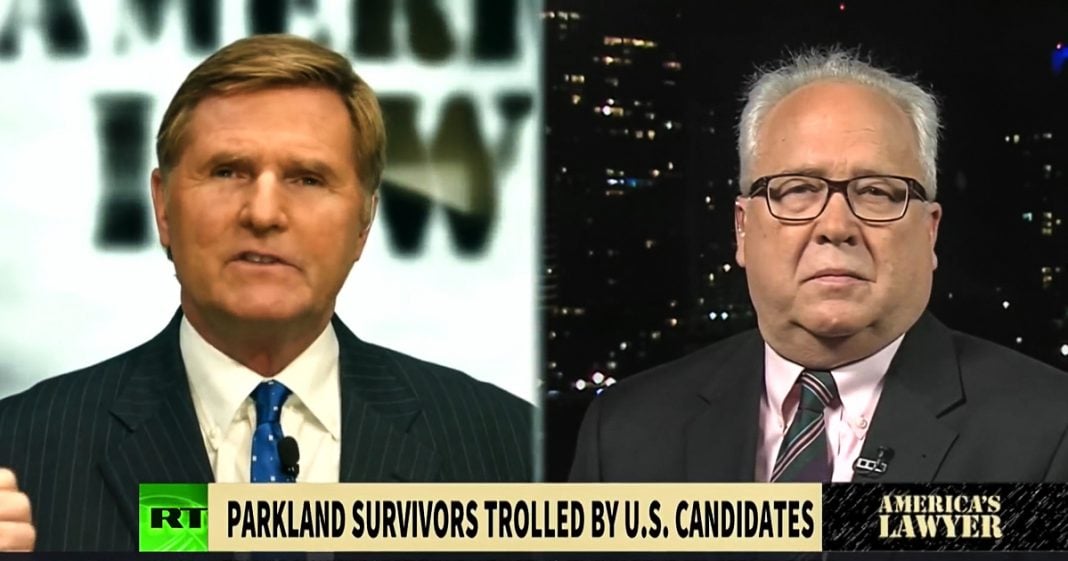 Via America’s Lawyer: Mike Papantonio and Rick Outzen talk about the attacks from Gun lobbyists against Parkland students who are fighting to enact sensible gun laws.

Mike Papantonio: On February 14th, 17 people were killed and 17 more were wounded when 19 year old Nikolas Cruz entered Marjory Stoneman Douglas High School in Parkland, Florida, and began shooting. David Hogg and Emma Gonzalez and their classmates have emerged in that as influential voices in the movement for gun reform. They’re articulate, they’re determined, and they’re fearless. They’ve been tapped into the growing sentiment across the country that gun laws need to change to stem the tide of mass shootings, such as the Sandy Hook Elementary, The Pulse in Orlando, and those in Charleston and Las Vegas.

Adults are listening. However, as the Parkland survivors have won support for such reforms as the ban of future AR-15 sales, universal background checks and waiting periods before purchasing firearms, they’ve also come under increasing attacks from internet trolls on social media and alt-right politicians have taken to liking and sharing the mean-spirited, baseless attacks to undermine the efforts of these teenage victims.

Leslie Gibson, Republican candidate for the Maine State House, in tweets referred to Gonzalez, who’s openly bi-sexual and had a buzz-cut, as “skin-headed lesbian”. He called Hogg a moron and bald-face liar. He later withdrew from the race because of that. After the March For Our Lives rally on March 24th, Iowa representative Steve King’s campaign Facebook page mocked Gonzalez for wearing a Cuban flag patch on her jacket, and accused her of betraying her Cuban heritage by advocating for gun control. Even aging has-been rocker Ted Nugent has gotten into the act. Nugent recently called David Hogg a lost cause. He said on WABC Radio, “He’s consumed with hate.” He’s part of the problem, not the solution, according to this guy.

Joining me now to talk about this is Rick Outzen, publisher of the Independent Weekly. Rick, start by telling us how vicious these attacks against the Parkland students really are, and what kind of things are being done here.

Rick Outzen: Well, they’ve targeted David Hogg and Emma Gonzalez because they’re the two most visible leaders of these students out of Parkland. Emma’s been attacked for her appearance. Like you mentioned in the opening, attacked for wearing a Cuban flag, even though her parents fled from Cuba in the 60s. She has had to deal with memes that have showed her falsely tearing the U.S. Constitution up. David Hogg has been hit with memes comparing him to Nazi youth. There’s a website called The Hogg Watch that attacks him on a daily basis.

The attacks are personal, they’re gutless, and they’re all the things that we hate about social media. All this venom has been heaped on top of them.

Mike Papantonio: You know, every time something like this occurs, I think of these has-been, I mean total has-been Ted Nugent. I mean, if you can name a song, it was written 40 years ago. But here’s a guy that wants to resurface. I suppose he wants to resurface as being somehow relevant. Or this politician that’s absolutely engaging in absolutely mean-spirited hate.

We see that after especially where we have gun violence involved. I mean, if you go back and look at these stories, this same thing has played out again and again, where you have somebody who dares to talk common sense and dares to say there’s a better way here, they’re attacked. This is always run and dominated by the NRA. The NRA may try to step aside from it and say, “Oh, we don’t have anything to do with this.” They have everything to do with this.

How have the students responded, Rick?

Rick Outzen: Well, they’ve responded with a whole lot more maturity than Ted Nugent, for sure. They have stayed on message. They’ve defended each other and their classmates. They made it pretty clear that this isn’t about banning all guns. This isn’t about repealing the Second Amendment. This is about reasonable gun reform to make sure that these kind of mass shootings don’t happen again. They’ve stayed on message, and that’s what I think what’s been so inspirational and inspiring about them.

Mike Papantonio: Well, I think the message is a smart message. They’re not overreaching, really. I haven’t heard anything that’s overreaching. It’s small steps towards common sense. I mean, if anything, what is it? Justice Stevens made the just absurd statement the other day that, “Gee, we’re going to have to appeal the Second Amendment”. When he said that, the NRA types went crazy. All it did was motivated them to get more involved in this mean-spirited fight, when really the best approach is what these kids are saying. Let’s do one step at a time. We’re not talking about taking your guns away. We’re talking about just common sense regulations.

Marco Rubio from here in Florida has been one of the main lawmakers that these young students are going after in terms of policy changes. You know Rubio personally. Do you think Rubio understands the kind of trouble he’s going to be in with his next election because of the Parkland students? I mean, surely he sees it coming. It’s not just about the students, it’s about the parents. it’s about the activists that are totally behind these kids. What is your take on that?

Rick Outzen: Well, Rubio is a senator in their part of the state, the southern part of Florida. They singled him out very early, and went after him, really started demanding that he not take any money from the NRA in their Political Action Committees. He was truly stumped by that. He’s tried to back up a little bit and praise the kids for their effort, but he hasn’t stepped up on any reforms.

Mike Papantonio: They have social media … I call it social media thick skin. They’ve grown up with social media, they know that every jack-legged freak in the world is going to have something to say on social media, so they’re kind of used to that. That’s an interesting thing.

One thing that’s occurred to me, you notice Remington is getting ready to file for bankruptcy. You’ve got Colt who’ve already filed for bankruptcy. You have several other small gun manufacturers all moving towards bankruptcy. Now, the reason they’re doing that is not … They see change taking place. They understand that in the business of guns, that there are subgroups. It’s not vastly across the country, there are small subgroups that seem to own most of the guns. When those subgroups are saturated with guns, they don’t have anybody else to sell to.

So what’s happening with Remington, Remington is now in the process of moving towards bankruptcy, really to protect themselves, I believe, from a shift that’s getting ready to take place in the United States. Colt already has declared bankruptcy. The NRA appears to be terrified right now, Rick, about the power that these students have. Don’t you agree that you’re kind of seeing them in a little different mode than we’ve seen the NRA in the past?

Rick Outzen: No, I agree completely, Mike. I mean, we’re looking at a situation … Remember, all these mass shootings. When we looked at The Pulse nightclub, we looked at Vegas last year. We’ve looked at Sandy Hook. Every time the NRA’s has been that we need more guns. We need to be less restrictive in our laws, we have to have guns in more people’s hands.

That isn’t working this time. These kids have changed the paradigm here. We’re seeing … We did our own polls statewide this past month in March, and we found that 59% of the voters in the State of Florida believe that we should be banning future sales of AR-15s, and that’s north and south Florida.

So the NRA, their old message isn’t working. I think they’re stumbling, bumbling, trying to find some way to change the narrative and none of it’s worked.

Mike Papantonio: Let me just point something out. We have at least 10 mayors from around the state of Florida that are suing the state government to allow them to enact tighter gun control laws. Unfortunately, in Florida, people don’t realize this, the lobbyist … I think his name is Marion Hammond, he’s just some bottom-feeder lobbyist that has been on this issue where he actually got a law passed that says that the locality … And this is not just Florida. This is happening all over the country. A locality, like say Broward County, that they can’t enact any kind of tighter gun control than what the state enacts.

Now this is not just Florida. This is taking place all over the country, where the legislation is to make the state argue that the state pre-empts a locality like Broward County or any place where they may have spectacular problems with things like guns or drugs, whatever it may be, that that locality can’t do their own kind of lawmaking to protect themselves. This was driven by the very worst bottom feeders that represent the NRA. They always have, and unfortunately we’ve got a couple of them very connected in Tallahassee, Florida, as they are in most legislatures around the country.

Can you imagine? That’s really where we are. You understand … I’m wondering. You’re a journalist, you’ve been following this for many, many years. What’s the next step if a locality can’t protect themselves? What do you think happens next?

Rick Outzen: Well you know, Mike, the thing I think we need to point out is Florida is where the NRA goes to test all of its gun laws. They pretty much own the Florida legislature. They can get just about everything they want passed, and have over the last two decades under Marion Hammer. She’s a very aggressive lobbyist for them. But this law, which happened in 2011, is really onerous because it fines the officials. If a city council member passes a rule that makes guns more restricted than the state rules, they’re subject to a $5,000 fine. They may lose their office. They could be removed from office.

So the only solution, and I think where these mayors are so smart, is to go to the court system. The court system has been our only defense in Florida against the NRA, these crazy laws they come up with in the legislature, Republican-controlled legislature, that pretty much does their bidding however they’re asked to do it. Once again, we’re going to have to look to a judge in Leon County to hopefully stand up for this illogical law that really takes away home rule. Yeah, it’s horrible.

Mike Papantonio: Rick, let me give you my take. My take is it’s going to take some commissioners, it’s going to take some mayors who have some courage. Rather than saying, “Oh, we can’t do that, because we’re doing to be sued because this Marion … What’s his name? Marion Hammer and his bottom-feeding lobbyist pals in Tallahassee, that they accomplished what they wanted to accomplish, so we just have to lay down.” It’s really going to take some people that have enough courage to say, “You know what? We’re not going to lay down. We think this is unconstitutional, we want to have an input in our own future and our community and we need to get something done on this.” Hopefully that’s where things are going to head. Rick, thanks for joining me. Let’s continue following this story.