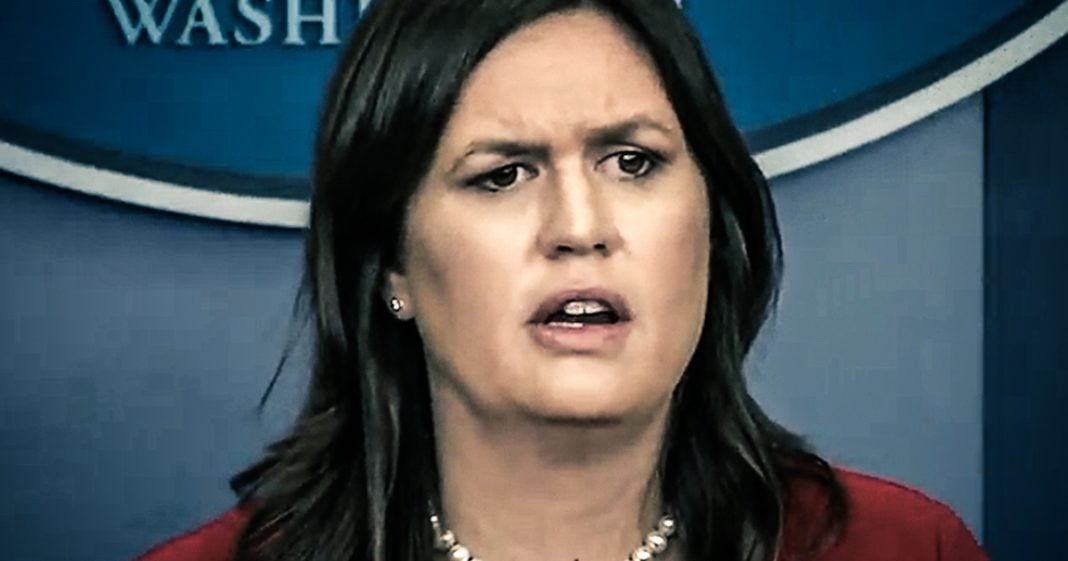 During Thursday’s White House press briefing, Sarah Huckabee Sanders answered a question about Trump’s payments to attorney Michael Cohen to reimburse him for paying off Stormy Daniels, where she admitted that the first she had heard of this was during Giuliani’s interviews on Fox News. This means that no one in the White House is telling Huckabee Sanders what the hell is going on, and she’s forced to learn about these things the same way the rest of the public is learning about them. Ring of Fire’s Farron Cousins discusses this.

Sympathy for Sarah Huckabee Sanders after being roasted by Michelle Wolf because Huckabee Sanders dares to wear a smoky eye makeup. Sympathy for her is pretty much worn off at this point, and that was on full display at the White House press briefing on Thursday. Obviously Sarah Huckabee Sanders had walked into that room knowing she was going to get some kind of question regarding Rudy Giuliani’s admission the night before, that yeah Donald Trump totally paid back Michael Cohen for Stormy Daniels payments. So what? Yeah, that’s basically admitting that the President committed a crime. Huckabee Sanders walked into that press briefing going, “Somebody’s going to ask me about this and I’m going to have to give some kind of answer. How can I lie my way through this?” Well as it turns out she didn’t have to lie, because nobody in the White House tells Sarah Huckabee Sanders anything. Take a look at her answer when asked directly about Rudy Giuliani’s admission. Here it is.

Reporter:
To clarify, when did you specifically know that the President repaid Mr. Cohen for the $130,000, you personally?

Sarah Sanders:
The first awareness I had was during the interview last month. Major.

Sarah Huckabee Sanders didn’t know. She, I guess, hadn’t talked to anybody in the White House before that, even though she’s taken questions on the Stormy Daniels/Michael Cohen business many, many times. Nobody bothered to tell the Press Secretary what actually happened so that she could in advance maybe craft something a little better than, “Yeah, I caught it on Fox News last night. Crazy, huh? Next question. Who’s up? Somebody? Anybody, give me something other than this question.” Sarah Huckabee Sanders gets her news about what’s happening in her own office the same way all the right wing trolls out there get their news, by watching Fox. Shouldn’t we expect a little bit better from the press secretary for the White House?

Shouldn’t somebody in that office be explaining to her what’s going on or does she just sit there in her office all day, wondering how in the hell she’s going to face the press one more time. What lies can she tell? What BS can she sell, instead of going out there and saying, “Excuse me, hey, guy down the hall, what’s going on in the White House? Maybe somebody, anybody, give me a little news so I can prepare for this crap.” Had she not been such a horrible human being from the start of her tenure at the White House, you might actually have a little bit of sympathy for her, but when you make the conscious choice to go out there every single day and lie to the American public, I have no, none whatsoever, empathy for the fact that nobody in that White House is telling you what’s actually going on.