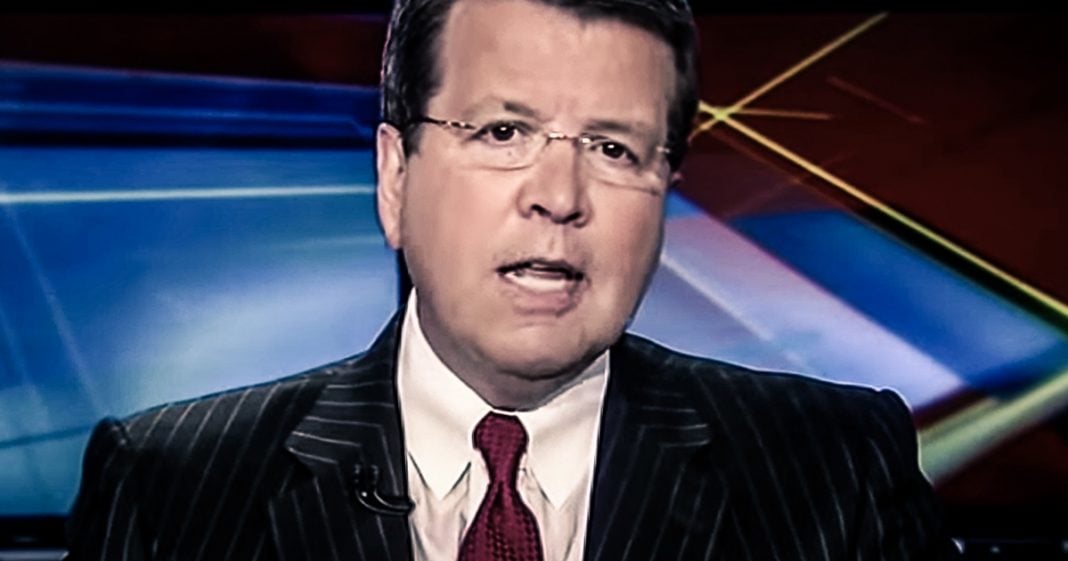 Everyone has a breaking point, and for some of the people at Fox News, all of the craziness from the Trump White House this weeks seems to be the last straw. On Thursday evening, Fox News host Neil Cavuto issued a blistering attack on Donald Trump, pointing out countless lies that the President has told and explaining that this isn’t a very good look for Trump. Ring of Fire’s Farron Cousins discusses this.

You know, at some point in life, on any issue that’s out there, people do have a breaking point, and for the folks at Fox News this week may have actually been their breaking point. On Thursday evening, Fox News host Neil Cavuto decided to devote more than four minutes of his show to exposing the very, very, very long list of Donald Trump’s lies. Take a look at how Cavuto torches Donald Trump while at the same time trying to act like he’s really not torching Donald Trump, even though he is. Take a look.

Neil Cavuto:
So let me be clear, Mr. President, how can you drain the swamp if you’re the one who keeps muddying the waters? You didn’t know about that $130,000 payment to a porn star until you did. Said you knew nothing about how your former lawyer, Michael Cohen, handled this, until acknowledging today you were the guy behind the retainer payment that took care of this. You insist that money from the campaign or campaign contributions played no role in this transaction, of that you’re sure. Thing is, not even 24 hours ago, sir, you couldn’t recall any of this and you seemed very sure.

I’m not saying you’re a liar, you’re president, you’re busy, I’m just having a devil of a time figuring out which news is fake. Let’s just say you’re own words on lots of stuff give me, shall I say, lots of pause. Like the time you said the Russians didn’t interfere in the 2016 election until a lot of Republicans had to remind you they did. Came back months later and you said, “Well, I never said that Russia didn’t meddle in the election,” when, in fact, you had, a lot. Now, none of this makes me a Never Trumper, just always confused.

Like when you claimed your tax plan was the biggest in US history, when it wasn’t, or that the bill you signed to make it all happen would cost you a fortune, when it turns out it is going to help make you a bigger fortune, or that your job approval numbers really aren’t that bad, it’s relative to other presidents at this stage, when they’re actually worse than most presidents at this stage. That can change but what’s weird is this pattern does not. Like the time that you said rumors of Rex Tillerson’s departure at the State Department were false, until they weren’t, or that your former chief of staff, Reince Priebus, wasn’t going anywhere, though he was, or your economic advisor, Gary Cohn, was doing a great job until he wasn’t. When you absolutely loved Steve Bannon until you didn’t. Swore by Jeff Sessions, until you started swearing at Jeff Sessions. Had your legal team locked in place until it wasn’t. Denied reports you were ever thinking about firing Robert Mueller, even as you now threatened getting involved at the Justice Department.

Now, none of this makes you evil, but I’m sure you can understand why even your friends say these inconsistencies don’t make you look good.

And keep in mind, that was only about half of that entire segment. Cavuto went on to talk about all of the things that Donald Trump has lied about and presenting it in such a way that shows that we really cannot trust the president. That is what Neil Cavuto was trying to get at without having to actually say those words, because as he said in the clip you saw, he’s not a Never Trumper, he’s not saying that you’re a horrible person, but everything that you do kind of points to those things, Mr. President. As Cavuto himself said, this isn’t a good look for you, especially when the mid-terms are creeping up right around the corner and, literally, at this point, every week gets worse and worse for Donald Trump.

Let’s keep in mind though, these are tragedies and mistakes and horrible things happening of his own design, because the Republican party refused to really vet him before they let him come in and join their Republican primaries. Had they known about all the horrible stuff this man has in his past, how stupid he was going to be if he ever won the presidency, they probably would have had reservations about lettings him on that very first debate stage where he kind of stole the show and then became the front-runner from that point forward. Cavuto is, and I almost hate to say these words here, absolutely right about what’s happening to Donald Trump. You can’t drain the swamp when you, yourself, are the one creating it.