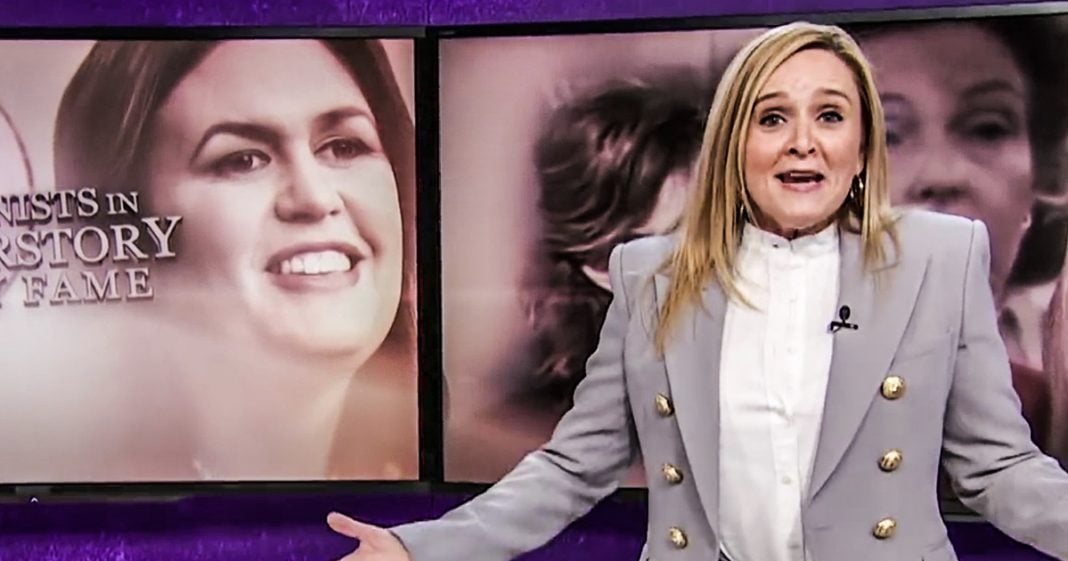 On this week’s episode of Full Frontal with Samantha Bee, she took the media and the White House to task for their phony outrage over the White House Correspondent’s Dinner and the roasting by Michelle Wolf. Samantha Bee pointed out that Sarah Huckabee Sanders is a complete liar all the time, so she absolutely deserved the incredibly mild ribbing that she received. Ring of Fire’s Farron Cousins discusses this.

On Wednesday evening on a show Full Frontal with Samantha Bee, host Samantha Bee decided to tackled the Michelle Wolf White House Correspondent’s Association Dinner, I guess, controversy that shouldn’t even really be a controversy, and she decided to focus on Sarah Huckabee Sanders and why what Michelle Wolf said was completely within bounds, and to be honest, quite mild compared to what Sarah Huckabee Sanders does every single day.

Take a look at the clip and how badly Samantha Bee roasted Sarah Huckabee Sanders.

Samantha Bee:
Look, calling Sanders a liar isn’t an insult, it’s her job description. Feminism doesn’t mean you can never make jokes about another woman ever. If it did, then I couldn’t say that Mika clearly stole her scarf off of Steven Tyler’s microphone stand. Sarah Sanders is very good at her job.

Speaker 3:
Why did the President call the U.S. Justice System a joke and a laughing stock during his comments …

Sarah:
That’s not what he said.

President Trump:
What we have right now is a joke and it’s a laughing stock.

Sarah:
The President hasn’t said that Russia did meddle.

President Trump:
This Russia thing with Trump and Russia is a made up story.

Speaker 6:
Deputy Press Secretary Sarah Huckabee Sanders was asked if the President was a liar.

Sarah:
I can definitively say the President’s not a liar.

Samantha Bee:
She is amazing. When a man had her job, he literally ran for the bushes. But if the press thinks being called a liar is a huge insult, maybe the should be mad at Sarah herself since she calls them liars constantly. I’m not saying Sarah Sanders doesn’t deserve the protection of feminism. She does. Though she’s not a feminist, which you can tell from the way she throws other women to the wolves on her boss’s behalf.

Speaker 9:
Moments ago, the President gave the man accused of sexually abusing a 14 year old girl his support in the Alabama Senate race.

Sarah:
He does want people that support his agenda. He’s not going to obviously support a Democrat.

Speaker 7:
As President Trump coming to the defense of staffers accused of domestic abuse, tweeting this, “People’s lives are being shattered and destroyed by a mere allegation. There’s no recovery for someone falsely accused.”

Sarah:
The President simply saying that there should be a due process.

Sarah:
Has Hilary Clinton apologized to the four American lives that were lost in Benghazi?

Samantha Bee:
Jake, what you have to keep in mind is Hilary Clinton Benghazi emails abortion. All President Secretaries lie, but Sarah Huckabee Sanders lies are more like a Jedi mind trick. No, April Ryan, you fucked Stormy Daniels. She is smart. She’s savvy, and she has an eerie ability to make towering falsehoods unwatchably dull.

In spite of the fact that this is a humor show, there’s a lot of satire, Samantha Bee nailed so many wonderful points throughout that whole clip and you can actually watch the full clip. The link is in the video description below. But talking about the fact that Sarah Huckabee Sanders is a woman so we can’t make fun of her. No, it doesn’t matter if you’re a man, if you’re a woman, if you’re transgendered, if you’re black, white, Hispanic, Muslim, gay, straight, doesn’t matter. If you’re a horrible human being that makes a living lying to the American public, deceiving them, and working for somebody as horrible as Donald Trump, yeah, you’re open for ridicule. We have to kind of get past that and that’s what Samantha Bee was pointing out there.

Yes, she is a woman, but she’s a horrible woman. Not just a horrible woman but a horrible person. As our so many other members of this administration. For the press to be freaking out like this and suddenly taking Sarah Huckabee Sanders side after she has done nothing but ridicule and mock and lie about them ever since she became part of the Trump administration. That’s despicable on the part of the media. Sarah Huckabee Sanders has opened herself up to this world of ridicule by the way she treats people, by the things that she says, and by the fact that she continuously stands by a President who has done far worse things to women than joke about their eyeliner.