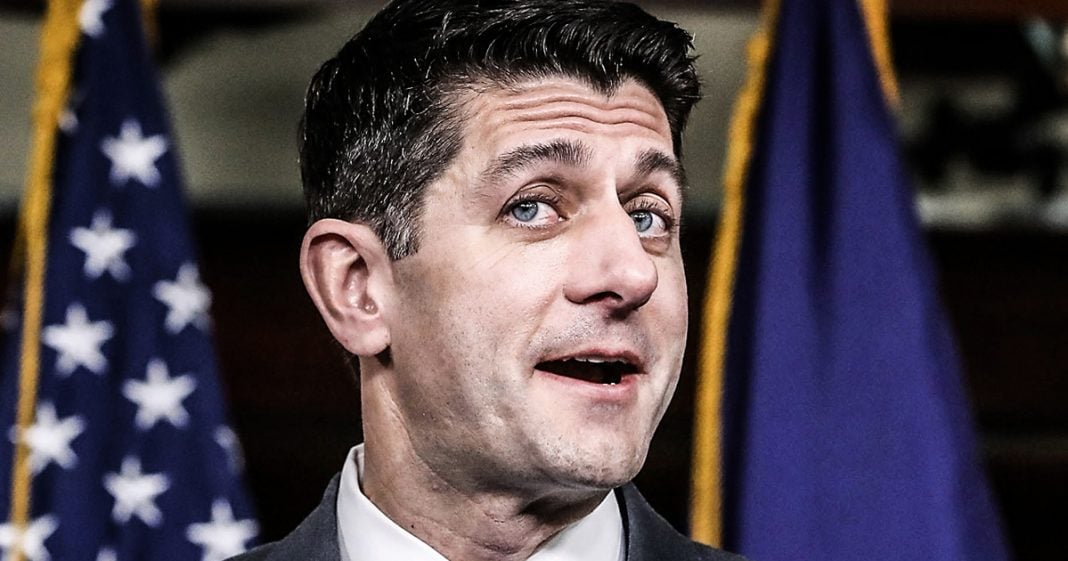 During a speech at a financial conference recently, current House Speaker Paul Ryan issued an ominous threat to the banking community. He told the crowd that if Democrats win back the US House in November, then subpoenas will be on the way to the nation’s banks. Has Paul Ryan been covering up criminal banking activity, because that statement sure makes it sound like it. Ring of Fire’s Farron Cousins discusses this.

Paul Ryan, the Republican Speaker of the House who announced that he is retiring after this current session of Congress ends and will not be seeking reelection, recently told a gathering at a financial conference that if Democrats win in the midterms this coming November, if they take back the House of Representatives, they’re going to start subpoenaing the big banks for all the crimes they’ve been committing.

So first, let’s read Ryan’s exact quote here. It says, “You’ll have gridlock, you’ll have subpoenas.” You’ll have subpoenas, not, they might subpoena you, they might launch investigations. They’re going to straight up subpoena you. So in that statement that Paul Ryan is making to bankers here in the United States, he’s telling them and telling us, the rest of the world, “I’ve been helping to cover up your crimes, preventing subpoenas, as have the other Republicans, but if we lose the majority then, hell, we can’t stop those floodgates anymore and you people might be going to prison.”

So I think the big question at this point is what are Paul Ryan and the Republicans covering up from these bankers? If it’s anything like what led up to the crash of 2007, 2008, it could be mortgage fraud, it could be securities fraud, it could be other risky investments where they gamble away people’s life savings, lose it all yet somehow they make a profit while screwing over consumers. I’m willing to bet it’s a little bit of all of that because the banks never change their ways, because nobody was every held accountable and nobody ever went to prison, except for people who decided to take money from rich people. So what is Paul Ryan hiding, what are the Republicans covering up, and why would he say that these bankers are going to face subpoenas if Democrats take back the House?

Now, there is a very slim possibility that Paul Ryan was just trying to spook them a little bit so they would open up their wallets and give more money to Republicans as we head closer and closer to the midterms, but I think he spoke the truth right there, for one of the first times in his career. I think he understands that the banks have been committing criminal activities and that the only things that’s stopped full blown investigations are those disgusting Republicans that we have in Congress, who are more than willing to take banker’s money and ignore the corruption in that industry as long as it means they get to keep their office for another two more years. And now that Paul Ryan doesn’t have to worry about reelection he’s free to admit that that is how he’s been running things in D.C. ever since he became Speaker of the House.