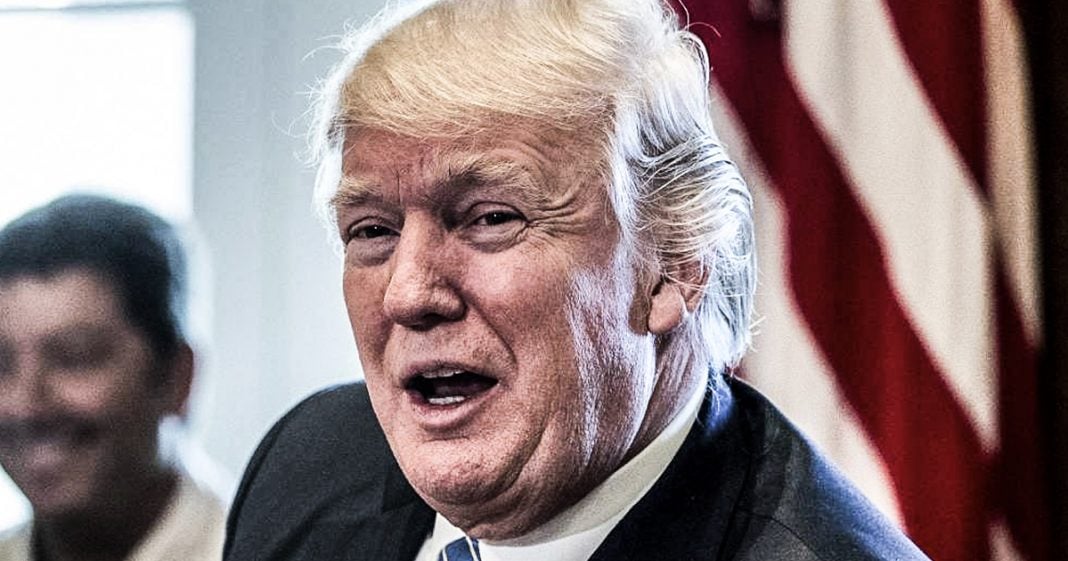 After it was revealed that Trump’s goons had raided the offices of his former personal doctor of 35 years, more revelations began to leak out, including the fact that the infamous letter written by Trump’s doctor praising his health as the best of any presidential candidate ever was actually dictated to him by Donald Trump himself. Not only is this medical malpractice for the doctor to sign off on it, but it shows that there is literally nothing that Trump won’t lie about. Ring of Fire’s Farron Cousins discusses this.

The drama surrounding Dr. Harold Bornstein who as most people know was Donald Trump’s personal physician for roughly 35 years, just seems to be taking a lot of very weird turns in the last 12 hours. First of all, we have the revelation that in February of 2017, Donald Trump had his body guard, a lawyer and one other unnamed individual go raid the offices of Dr. Bornstein immediately following Bornstein’s leaking to the New York Times that Donald Trump had been taking Propecia in an attempt to regrow his hair.

Now before we get into the rest of the ridiculousness here, let’s talk about that particular fact, the raid and the leak. If Bornstein did in fact tell the New York Times that Donald Trump was taking Propecia, which he admits that he did, that’s medical malpractice. That’s protected by doctor, patient confidentiality. So no matter how funny it is, that people think that Trump was taking Propecia, if your doctor would’ve leaked your medication list to the press, wouldn’t you be kind of pissed?

But second of all, the raid. That also might be considered illegal of Dr. Bornstein did not sign off on the release of these medical records to these individuals. See, medical records in the United States are a tricky thing. If the patient does not sign off to the doctor, giving them permission to release it to other individuals, it cannot be released including to a lawyer. According to Bornstein, he didn’t have that. He didn’t sign any release to give up his personal records that he had been storing. So there’s that.

So two potential illegal activities here, one on behalf of Donald Trump, one of behalf of Bornstein. And let’s talk for a second about the Propecia thing. I don’t think that there’s anything wrong with that, that’s what this drug is for. I think Donald Trump needs to own up to that. Personally speaking, I can say as somebody who started losing their hair at age 19, I also for a weeks tried Propecia, didn’t like the side effects from it so I went off it and just said screw it. This is how I look now. But anyway, let’s move on to the more kind of salacious facts here.

According to Bornstein, that letter that he signed off on saying that Donald Trump was the healthiest person to ever run for president ever, yet it turns out that Bornstein didn’t actually write that. According to him, Donald Trump dictated that letter to him so that everybody in this country would think he’s just like a super healthy, wonderful guy. Specifically a couple lines from that letter, “His physical strength and stamina are extraordinary. If elected, Mr. Trump I can state unequivocally would be the healthiest individual ever elected to the presidency.” Now I remember when that letter came out. And it was universally mocked all across the media, and rightfully so.

And now we find out that this doctor, who had originally claimed, “Yes I wrote the letter.” Now saying he did not write the letter. This whole thing is absolutely bananas. And then you had Sarah Huckabee Sanders on Tuesday go to the podium during the press conference and say, “Yeah, they went in there and they took the records.” So they’re not even denying that they raided the doctor’s office. And now the doctor says he didn’t write the letter, Donald Trump wrote the letter. We know that the other doctor who examined Donald Trump just got busted for being kind of crazy.

So what is the true state of Donald Trump’s health? We don’t have any doctors that we can tell that have looked at Donald Trump for the last 35 years that have any credibility to speak of. And that’s dangerous, especially when you have a man who is consistently by independent health professionals out there been told that he’s suffering from some kind of mental illness. Don’t you think at this point we need some kind of qualified medical personnel to examine this guy?

This is a man who tried to make massive issues during the campaign about his opponents health. Republicans were all over the place talking about how Hillary’s failing health would prevent her from becoming president. When now we have a guy that apparently hasn’t been to a real doctor in nearly four decades. I think the American public on this and so many other issues with the Trump administration deserve some honest answers at this point.