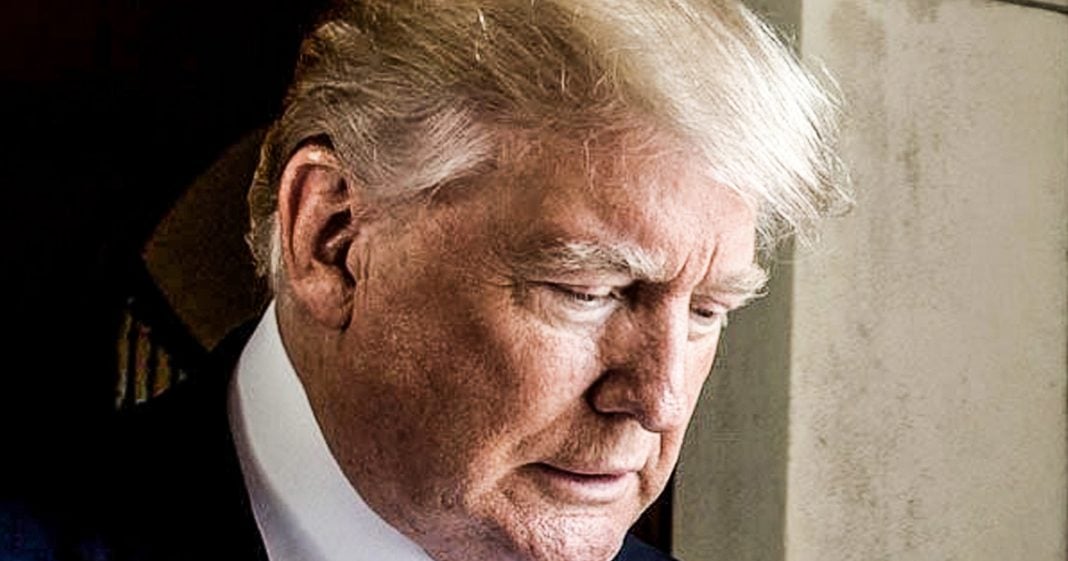 Donald Trump has spent the last few days on Twitter insisting that the investigation into his campaign is nothing but a witch hunt and that the “leaked” questions from Mueller’s team show that there was no collusion. He also claims that you can’t obstruct justice if you never committed a crime. The painful ignorance of this man tells us that he has no idea how screwed he really is, as Ring of Fire’s Farron Cousins explains.

Donald Trump doesn’t seem to understand how the law works, and furthermore, he doesn’t really understand how much trouble he might actually be in, as a result of the ongoing investigations. Now, for the last few days, Donald Trump seems to have gone into overdrive a bit, tweeting about the fact that this investigation is a witch hunt, that there was no collusion, and those questions that his administration apparently leaked are proof of that, and that it couldn’t have obstructed justice if there’s no crime.

Well, see, here’s the thing Donald. None of what you’ve said about any of this is actually true. Here’s the first tweet that set Donald Trump off this week on his tangent about these investigations. He said, “So disgraceful that the questions concerning the Russian witch hunt were ‘leaked’ — he put in quotation marks — to the media. No questions on collusion. Oh, I see. You have a made-up phony crime, collusion, that never existed, and an investigation began with illegally leaked classified information. Nice.”

There’s nothing in that sentence or that phrase, paragraph, whatever you want to call his mindless drivel there. There’s nothing in it that’s actually true. There are questions that were leaked about collusion. There’s plenty of them. They ask about his involvement with people who have pleaded guilty to crimes already. There’s questions about his contacts. There’s all kinds of questions about collusion. My guess is Donald Trump maybe didn’t even read them.

The second part he talks about, this investigation began with the leaking of classified information … That’s actually the first time I’ve ever heard that talking point used. I’ve never heard that up to this point. That is not at all what happened here. Trump is just trying to get his followers all drummed up thinking that the whole thing is fake.

Then, he went on a little bit later in the week. He tweeted, “It would seem very hard to obstruct justice for a crime that never happened. Witch hunt!” Yeah, that’s not how obstruction of justice works either. Even if you didn’t commit a crime and nobody committed a crime, if there is an ongoing investigation, which is defined as justice, and you attempt to obstruct it, even if you had done nothing wrong, you still just committed a crime by obstructing justice. Any impediment into an investigation by law enforcement officers is obstruction of justice, whether or not you had previously committed a crime. That’s how that works. Furthermore, there is a crime, because the investigation, once again, has had people pleading guilty, so we do know that crimes were committed.

That’s what I don’t understand about all this, how people can say that this is a fake investigation. People don’t plead guilty in fake investigations. People don’t constantly go out there and claim that this is a witch hunt, if they haven’t done anything wrong. Donald Trump should be welcoming the investigation as an opportunity to clear his name, but he’s not, so either Donald Trump is just painfully ignorant about how the law works here in the United States, which is entirely possible and plausible, or he, honest to God, doesn’t understand how much trouble he is facing as a result of these investigations. Best guess at this point is that it’s some kind of combination of the two.

Donald Trump doesn’t have good enough lawyers to explain to him how the law works, so he may honestly believe that he is not the target of any kind of collusion investigation or that you can’t obstruct justice if you didn’t previously commit a crime. I think we’re going to find out, as this thing goes on, that that if you didn’t previously commit a crime thing won’t even apply to Donald Trump.